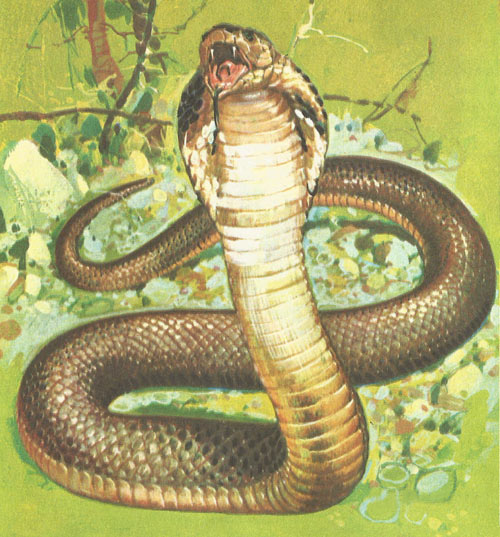 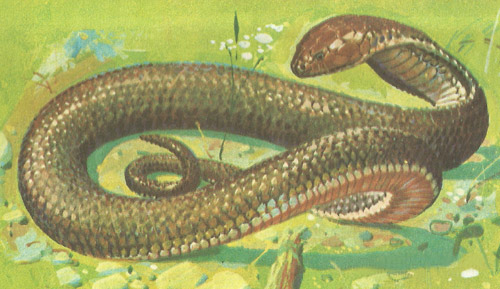 Variations in pattern on the hood of the spectacled cobra.

A cobra is any of several highly poisonous snakes in the family Elapidae, including mambas, coral snakes, kraits, and true cobras (genus Naja). It can expand its neck ribs to form a characteristic hood. Found primarily in Africa and Asia, cobras are the favorite of snake charmers and feed on rats, toads, and small birds.

The king cobra (Ophiophagus hannah) reaches 5.5 m (18.5 ft) in length, and is the largest venomous snake in the world. The Indian cobra (Naja naja) with the spectacle-like markings on its hood, frequents houses at night to search for rats and is responsible for the deaths of several thousand people a year. Some African species have forward-facing fangs and can spit venom into a victim's eyes from more than 2 m (7 ft), causing temporary or permanent blindness. Farther east, in Malaya and Indonesia, the cobra is black in color, without the spectacle marks. In addition to the common cobra there is tropical Asia another species, the king cobra or hamadryads (Naja Hannah), which is the biggest poisonous snake in the world; it has been known to reach a length of over 18 ft. One of the African cobras has the habit of spitting its venom at the face of any person or animal that molests or alarms it. Unless very quickly washed out of the eyes with clean water, the venom can cause permanent injury. Dogs are sometimes blinded by these snakes. The 'asp', which the Egyptian queen Cleopatra used to commit suicide in 30 BC, was probably the Egyptian cobra, Naja haje.

Cobras are well known for their habit of raising up the fore part of the body and spreading the hood. This has an interesting mechanism. All the way along its body a snake has ribs, which are hinged to the vertebrae, the separate bones of the backbone. In the cobra the ribs of the 'neck' are much longer than the rest and normally lie back on each side, and the skin of the neck is rather loose. When it wants to spread its hood the cobra raises the fore part of its body and moves the hinged ribs to that they push the skin out on each side. Why does the cobra spread its hood, and why does it have a hood, anyway? To understand this you must realize that the poisonous bite of a snake is of very little use as a defensive weapon. It quickly paralyses and kills the little creatures that a snake eats, but against a larger animal it is useless for defence because its action is slow and does not immediately incapacitate the snake's enemy, although later on the enemy may well die from the poison. Because of this the poison is only useful, in defence, as a threat, and to be effective a threat must be made in an unmistakable way. What the cobra is saying, in effect, when it spreads its hood is 'Leave me alone. If you attack me I will bite you. I don't want to bite you, but I will if necessary, so leave me alone'. This is what most animals do when confronted with a cobra.


Is the cobra deadly?

A bite from a cobra is a very serious mater, but quite a large percentage of cases recover without treatment, or without any effective measures being applied. It is this fact that has led to all sorts of 'cures', like magic stones and herbs and large doses of whisky, which really do no good at all; alcohol is harmful in cases of snake-bite and lessens the victim's chances of recovery. In cases like this, if the victim does recover, the person who has given the 'remedy' will claim the credit, not realizing that they would have recovered just as well, perhaps better, without it. If death does occur, it does so usually after six or more hours, due to paralysis of the nerve centers of the breathing system. No snake-bite causes 'instantaneous' death.

In the cobra, which is a typical poisonous snake, the pair of teeth right at the front of the upper jaw are larger and longer than the rest and are channelled, rather like the needle of a hypodermic syringe. Each of these is connected to a tube or duct which leads to a gland on each side of the head, in which the venom is formed. When the snake bites, the teeth pierce the flesh of the victim and special muscles compress the gland, forcing the venom down the duct and out through the channels in the teeth. The whole process is very similar to what happens when the doctor gives you an injection, except that the snake uses two needles.