anatomy of the cod

Anatomy of the cod.

Skeleton of a Teleostean fish. 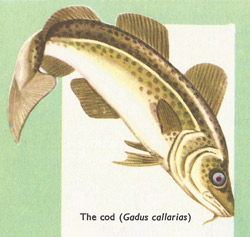 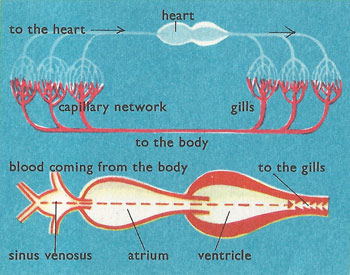 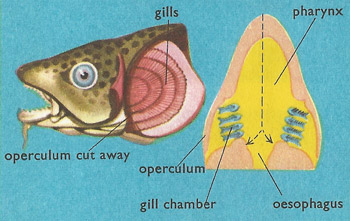 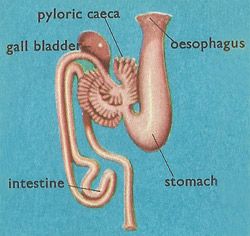 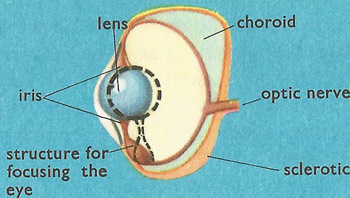 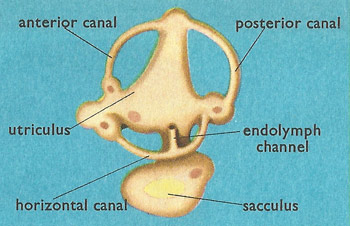 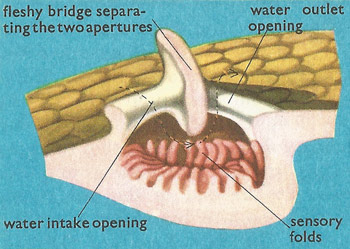 The cod (Gadus callarias) belongs to the family of fishes called the Gadidae, which is included in the great superorder Teleostei, or bony fish.

It finds its food on the sea bottom, feeding on crabs and other fish. Its fertility is extraordinary; it may produce between 8 and 10 million eggs in a year, but very few of these come to maturity. Cod grow to about 4 ft in length, and are most numerous in the North Atlantic.

The heart of the cod (and of other fishes) is a simple structure consisting of two compartments: an atrium, or auricle, and a thick-walled, muscular ventricle. The blood which has circulated in the body collects in the sinus venosus and passes from it into the atrium. From there it goes into the ventricle, which contracts powerfully and pumps it through to the gills. The blood then goes directly to the body circulation without returning to the heart (as it does from our own lungs) for a fresh push, or impulse, through the circulatory system.

Fishes respire or breathe by means of gills. Water, containing dissolved oxygen, enters through the mouth and passes out through an opening on each side of the head. Just inside this opening, and protected by a bony covering called the operculum, are the gills, which extract oxygen from the water as it flows through them.

It is a principle in anatomy that the more difficult the food is to digest, the more complicated is the digestive system.

The cod is carnivorous (that is, flesh eating), and since its food is easily digestible the digestive apparatus of the cod is simple.

The stomach is simply an expansion of the alimentary canal, or digestive passage, and behind it a number of finger-like appendages, called the pyloric caeca, branch from the intestine and thus increase its absorbing area. The teeth serve only to grasp the prey, which is always swallowed whole.

Fish have very little intelligence, as we understand it, and the brain is accordingly small. However, their senses are acute, and the parts of the brain concerned with the sense of smell (o factory lobes of the fore-brain) and of sight (optic lobes or mid-brain) are well developed.

The hind-brain, or cerebellum, is concerned with posture and preserving balance and is well developed in the cod. Behind the cerebellum a thick column of nervous tissue, called the medulla oblongata, connects the brain with the spinal cord.

Most bony fish, including the cod, have an organ known as the swim bladder, or air bladder, lying just above the intestine. It contains a mixture of gasses: oxygen, nitrogen, and carbon dioxide.

By contracting or expanding, the swim bladder keeps the fish's body in equilibrium with the water at various depths, so that it tends neither to float up nor sink down. If the muscles controlling the bladder relax, the fish will float; this is why a dead fish floats, belly upwards.

If we examine a cod closely we see a distinct line running along each side from behind the head to the base of the tail. This is a sense organ and consists of a canal running under the scales, filled with slime and containing sense cells.

When a fish swims near any obstacle, or encounters a current, there is a slight change in the pressure of the water; the lateral line is sensitive to such changes, so the fish is able to detect currents and avoid obstacles, even if it cannot see them.

The eye of the cod is similar to the human eye, but the focusing, or accommodation, works differently; the lens of a cod's eye is moved backwards or forwards to focus, and the eyes act independently of each other.

The cod has no outer or middle ear, but only an inner ear, which is concerned rather with reactions to pressure and gravity than hearing. Inside the sacculus there are small, hard, pebble-like objects called otoliths, the movements of which control the fish's balance.

The cod has no nose opening into the throat, as we do. Instead it has, on each side of the snout, a pit with two openings, containing folds of tissue that are sensitive to chemical stimuli. That is to say, the tissue is able to detect substances dissolved in the water and so serves the fish in the same way as an organ of smell or of taste.

The skeleton of a Teleostean fish is complicated and consists of a very large number of bones, far more than there are in man's skeleton. The vertebrae are spiny and there are numerous ribs; these are the bones that we come across when we eat fish. The fins are supported by slender bones called fin-rays. The pectoral and pelvic fins of a fish represent the fore- and hind-limbs of the higher vertebrate animals.