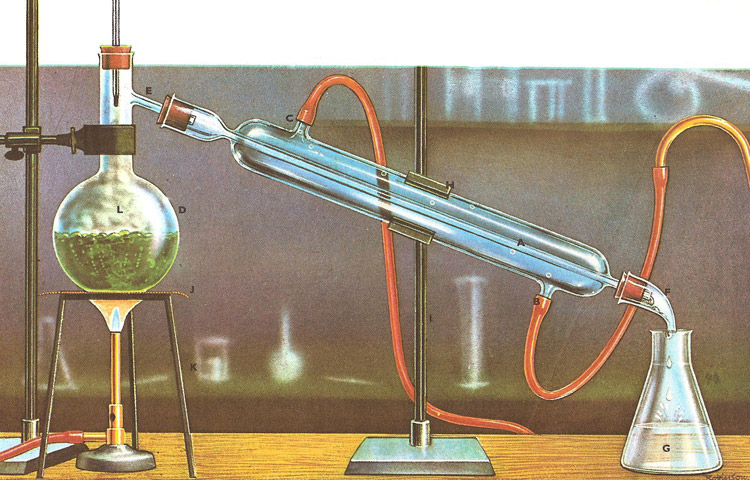 A condenser is the key piece of apparatus used for distillation in the laboratory. The process known as distillation is a very good way of separating a mixture of liquids or a liquid from a solid dissolved in it. In outline, distillation entails heating the mixture until one of the liquids turns into vapor and boils off leaving the other liquid or the solid behind. The vapor that comes off is not lost: once it is well clear of the boiling mixture it is cooled and turns back to liquid. The condenser is the apparatus which cools and condenses the vapor.

The Liebig condenser, the type most often used in lab work, consists of a long glass tube which is enclosed by another tube (jacket) through which cold water can be circulated. The water cools the inner tube so that vapor which is passed through it is condensed to a liquid.

The mixture to be distilled is placed in a round-bottomed flask which has a side arm leading off its neck. The side arm is pushed through a cork or rubber bung which is fitted tightly into the neck of the condenser. A thermometer is placed in another cork which is fitted firmly into the neck of the flask. The bulb of the thermometer must be level with the side arm exit because it must measure the temperature of the vapor and not the temperature of the liquid which is boiling below. The thermometer is necessary when a mixture of two liquids is being separated since by keeping the temperature of the vapor passing into the condenser at a certain steady value one of the liquids can be condensed while the other remains behind in the flask.

The flask is placed on a piece of wire gauze over a tripod. It should never be heated directly as this may crack it. Both the flask and the condenser are supported by clamps lined with cork or rubber which must be tightened with care to avoid cracking the glass. A tapered and curved tube called an adapter is placed over the lower end of the condenser held firmly on by a cork. A conical flask to collect the condensed vapor is placed so that the end of the adapter comes just inside its neck.

All the apparatus, the round-bottomed flask, condenser, adapter, and conical flask must be thoroughly washed and dried before assembling it. All corks or bungs must fit perfectly to prevent the escape of any vapor – this is particularly important when an inflammable mixture is being distilled. The side arm of the flask must be inserted into the neck of the condenser in the correct position so that there is no undue strain on the side arm. The cold water must enter the jacket of the condenser at the lower end so that the whole of the jacket is filled and thus cools the whole of the inner tube. The flow of water need only be slow. If water enter the jacket from the top it would flow straight out through the bottom opening without cooling the inner tube.