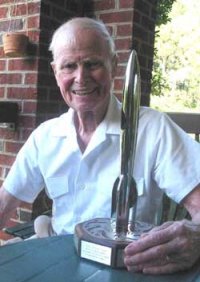 Frederick Durant was an American rocket pioneer who was heavily involved in the development of missiles and space launch vehicles between the end of World War II and the mid-1960s. He worked for several aerospace organizations, including Bell Aircraft Corp., Everett Research Lab, the Naval Air Rocket Test Station, and the Maynard Ordnance Test Station. Later, he became the director of astronautics for the National Air and Space Museum and served as an officer for several spaceflight organizations, including the American Rocket Society (president 1953), the International Astronautical Federation (president 1953–56), and National Space Club (governor 1961).