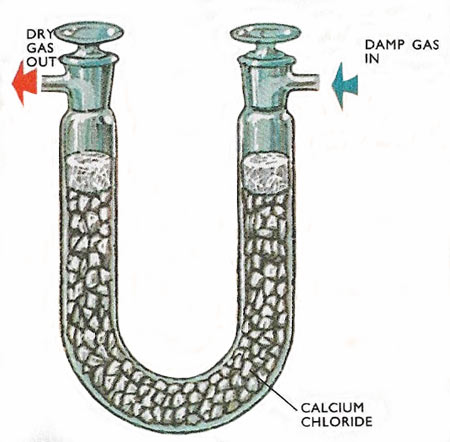 Drying a gas by passing it into an absorption tube containing calcium chloride crystals, packed in with glass wool filter plugs. 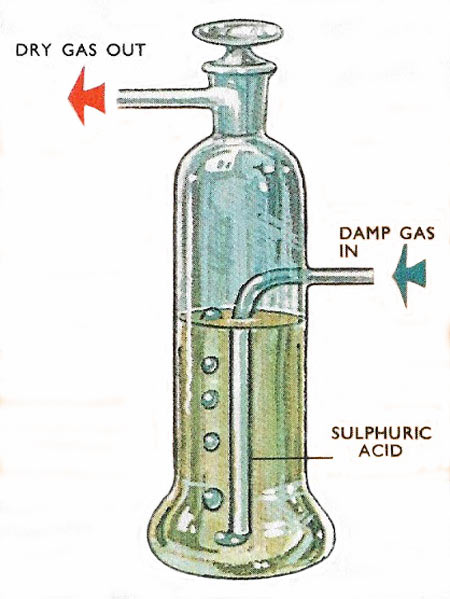 Drying a gas by bubbling it through concentrated sulfuric acid, which removes the moisture. 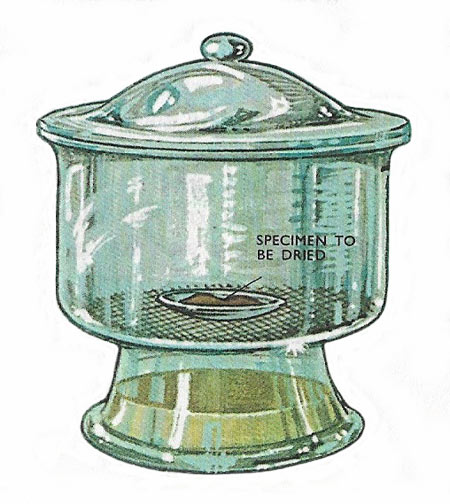 The solid to be dried is placed in a sealed dessicator. The atmosphere is kept dry by the dessicant, which may be one of a number of compounds, depending on the degree of dryness required..

One of the most common impurities to be found in newly prepared chemicals is water. Great care is taken to remove the water because the smallest trace might, in an otherwise pure substance, have profound effects on its chemical properties. Chlorine gas, for example, when absolutely pure and dry, is not particularly reactive, but when the slightest trace of moisture is present it becomes one of the most reactive gasses known.

To remove the moisture, the chemist has at his disposal a number of drying agents (desiccants). The choice of a particular agent depends on the particular application. One might be more effective than another, but may not be used because it reacts with the chemical it is supposed to be drying.

Some drying agents merely take water into their surface structures – silica gel, for example. Others remove water as a result of a chemical reaction. For example, concentrated sulphuric acid will remove water of crystallization from copper sulphate crystals, turning it from the blue form to the white anhydrous form:

In an even more powerful reaction, it drags water right out of the sugar molecule, leaving behind a black mass of carbon:

Though it is obviously a good drying agent sulfuric acid must be used with care because of its properties as a powerful acid and oxidising agent. The common gasses which can be dried by concentrated sulphuric acid include nitrogen, oxygen, carbon dioxide, and hydrogen but others – ammonia, nitrogen dioxide, hydrogen bromide, hydrogen chloride, and hydrogen sulphide – cannot be dried in this way. All of these gases react with the acid.

There are a number of solid desiccants that might be used in the laboratory. These are often anhydrous forms of crystals that take up water of crystallisation, although phosphorous pentoxide – a very efficient desiccant, is turned into a wet mass of phosphoric acid by the water it absorbs. A more commonly used one is anhydrous calcium chloride. To dry a gas the solid is placed in a drying tube and the gas is passed over it.

To dry liquids (particularly organic compounds) the solid calcium chloride is dropped into the liquid and allowed to stand for a few hours. Then the liquid is passed through a coarse glass wool filter and the solid, which has taken up the water from the organic liquid, is separated out. Other solids used in organic chemistry are anhydrous magnesium sulphate and anhydrous sodium sulphate. These are slower in action than calcium chloride.

The most drastic way of drying a solid is to heat it to dryness, but this cannot always be done because the solid might decompose at high temperatures. A safer method is to dry the solid in a desiccator. This is a sealed vessel in which the damp solid is placed on a watch glass. The drying agent – sulphuric acid, calcium chloride, or phosphorous pentoxide is placed in the base of the desiccator. The water vapour in the atmosphere in the desiccator is quickly absorbed by the desiccant and as more comes off the damp solid this is removed, too.

The desiccator is also used as a cooling vessel. When a solid is dried by heating, it is essential that it cools in a dry atmosphere to prevent absorption of moisture from the atmosphere. This is ensured by allowing it to cool off in the dry atmosphere of the desiccator.

The following is a list of the most commonly- used drying agents:

There is an enormous variation in the effectiveness of these drying agents – phosphorous pentoxide leaves behind in a gas 1/100,000 of the quantity of water that an inefficient drying agent like copper sulphate does.