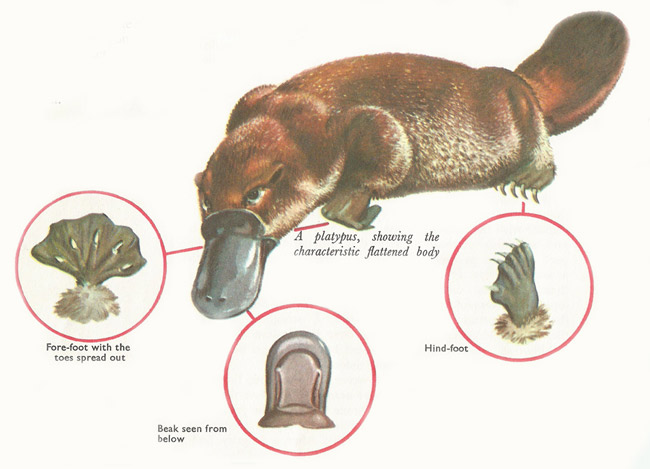 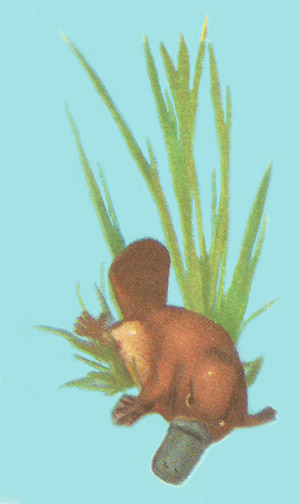 Towards the end of the 18th century, European naturalists were mystified by the skins of some strange animals that had been brought from Australia. The fur of this creature was like that of a mammal, but instead of a mouth it had a beak, which looked like a duck's bill. Some of the naturalists of the time simply refused to believe that such an animal could exist. They said that the specimens must have been made up by joining together parts of a mammal and a bird. The Chinese were known to be very clever at constructing chimera in this way and selling them to sailors as curiosities.

However, there was no sign of artificial joins and examination of a specimen which had been preserved whole in alcohol made it clear that this was indeed a genuine animal. Experiments showed that its anatomy was halfway between that of a mammal and a reptile. It was just by chance that its beak look like a duck's bill. An investigation of the live animal's showed that it laid eggs like a duck or a bird,, but suckled its young like a mammal. In fact, the platypus as this extraordinary animal is called, is a very primitive mammal.

The fore-feet have five toes, with claws, which are joined by a web that is much longer than the toes themselves. The platypus also has five, long clawed toes on its hind-feet, but these are joined by a shorter membrane than that of the fore-feet. The males have a spur, a couple of centimeters long, on their heels; this is hollow and connected with a poison gland. The tail is broad and flat, and looks rather like that of a beaver. The platypus uses it for swimming, and with its help can dive and surface remarkably quickly.

The Monotremata are the only mammals that lay eggs. The platypus lays two or sometimes three at a time, and they are covered by a very thin shell, resembling parchment, like those of most reptiles. The eggs are round, about 2 cm in diameter at first, growing larger until the young are hatched.

The platypus lives in ponds, lakes, and rivers in Australia and Tasmania. It remains hidden during most of the day in a long tunnel, which it digs in the bank, and which opens under water. Towards evening it comes out and swims along the water's edge, probing the bank with its beak in search of food. Its eggs are laid in the burrow and are hatched out by the female. At one time the platypus was hunted for its fur and was threatened with extinction. It is now strictly protected, and is becoming more common.

Kingdom: Animal
Phylum: Chordata
Subphylum: Vertebrata
Class: Mammalia
Order: Monostremata (the word means 'single opening', and refers to the single excretory orifice). The platypus and the spiny anteater, or echidna, (both Australian) are the only members of the order.
Family: Ornithorhynchidae
Genus: Ornithorhynchus
Species: anatinus