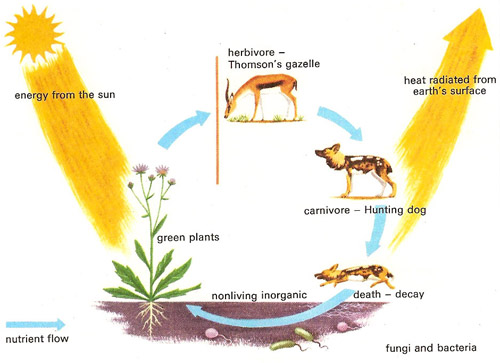 Components of an ecosystem.

Ecology is the branch of science studying the interactions among living things and their environment, including: the interactions of living organisms with one another and with their non-living surroundings, the flow of matter and energy in an environment, and the structure and functions of nature. The term 'ecology' was coined by Ernst Haeckel in 1866.

The whole Earth can be considered as a large ecological unit: the term biosphere is used to describe the atmosphere, surface, subsurface, oceans, and ocean floors within which living organisms exist. However, it is usual to divide the biosphere into a large number of ecological sub-units or ecosystems, within each of which the organisms making up the living community are in balance with the environment. Typical examples of ecosystems are a pond, a deciduous forest, or a desert. The overall climate and topography within within an area are major factors determining the type of ecosystem that develops, but within any ecosystem minor variations give rise to smaller communities within which animals and plants occupy their own particular niches. Within any ecosystem each organism, however large or small, plays a vital role in maintaining the stability of the community.

The most important factor for any organism is its source of energy or food. Thus, within an ecosystem, complex patterns of feeding relationships or foo chains are built up. Plants are the primary source of food and energy; hey derive it through photosynthesis, utilizing environmental factors such as light, water, carbon dioxide, and minerals. Herbivores then obtain their food by eating plants. In their turn, herbivores are preyed upon by carnivores, who may also be the source of food for other carnivores. Animals and plant waste is decomposed by microorganisms (bacteria and fungi) within the habitat and this returns the raw materials to the environment. The number of links within a food chain are normally, three or four, with five, six, or seven less frequently. The main reason for the limited length of food chains is that the major part of the energy stored within a plant or animal is wasted at each step in the chain. Thus if it were possible for a carnivore to occupy, say, position 20 within a food chain, the area of vegetation required to supply the energy needed for the complete chain would be the size of a continent.

The plants within an ecosystem, as well as the major environmental features, help create habitats suitable for other organisms. Thus, in a forest ecosystem, the humid, dimply illuminated environment covered by a thick canopy is suitable for mosses, lichens, and ferns and their associated fauna. Within any ecosystem the raw materials nitrogen, carbon, oxygen, and hydrogen (in water) are continually being recycled via a number of processes including the nitrogen cycle, carbon cycle, and photosynthesis.

Most natural ecosystems are in a state of equilibrium or balance so that few changes occur in the natural flora and fauna. However, when changes occur in the environment, either major climatic changes or minor alterations in the inhabitants, an imbalance results and the ecosystem changes to adapt to the new situation. The sequence of change that leads to a new period of equilibrium is called a succession and may take any length of time from a few years, for the establishment of a new species, to several centuries, for the change from grassland to forest.

Over millions of years, nature has moved toward the overall creation of stable ecosystems. Natural changes, such as adaptations to the slow change of climate, tend to be gradual. However, man often causes much more sudden changes – the introduction of a disease to a hitherto uninfected area, the cutting down of a forest, or the polluting of a river. The effects of this type of change upon an ecosystem can be rapid and irreversible.