The topography of a desert is characterized by the relative absence of chemical weathering. Most erosion takes place mechanically through wind abrasion or the effect of heat. Mesas (1) are large flat-topped areas with steep sides. The butte (2) is a flat isolated hill also with steep sides. Yardangs (3) are wind-eroded features consisting of tabular masses of resistant rock resting on undercut pillars of softer material. They are elongated in the direction of the wind. Alluvial fans (5) are deltaic pebble-mounds deposited by flash floods, usually found at the end of wadis (4). A salt pan (6) is a temporary lake of brackish water also formed by flash floods. An inselberg (7) is an isolated hill rising abruptly from the plain. A pediment (8) is a gently inclining rock surface. 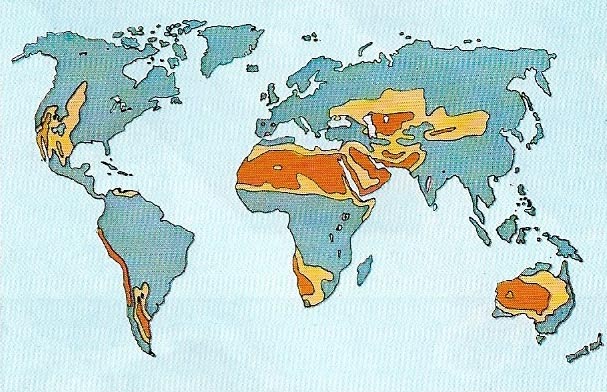 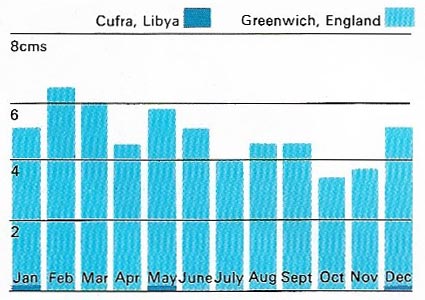 Fig 2. The rainfall in a desert area such as Cufra, in Libya, is vastly different from that in a wetter area such as Greenwich, England. Desert rainfall is usually less than 10 cm (4 in) a year and is very irregular with cloudbursts and long dry spells. 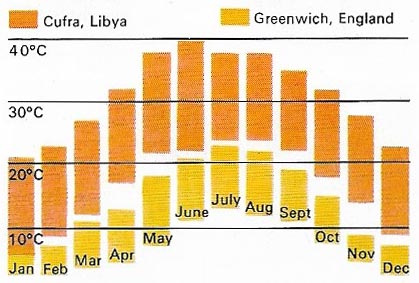 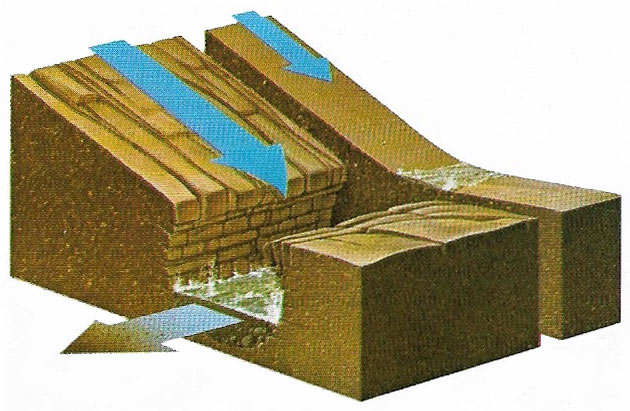 Fig 4. Wadis are steep or vertically sided valleys in which water runs only during rare flash floods. They start with random depressions in desert mountain areas or arid plateaus. They are deepened and widened by the floods which, because the water is moving so fast, are able to prise away and move large slabs of rock. During a flood the water may cover the whole width of the wadi. 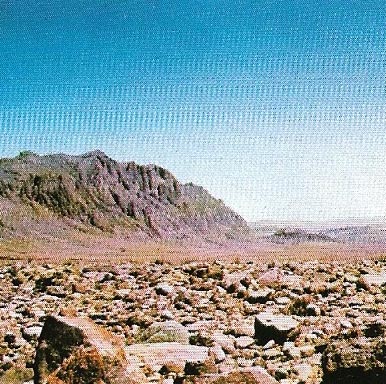 Fig 5. Rocky surfaces are far more common in deserts than sand seas. When loose material containing pebbles or larger stones is exposed to wind, all the fine dust and sand particles are blown away leaving a desert pavement or reg. The surfaces of mesas and larger plateaus are scoured clean by the wind, and form rock deserts called hammadas showing wind-eroded features – yardangs and mushroom-shaped rocks called zeugens. 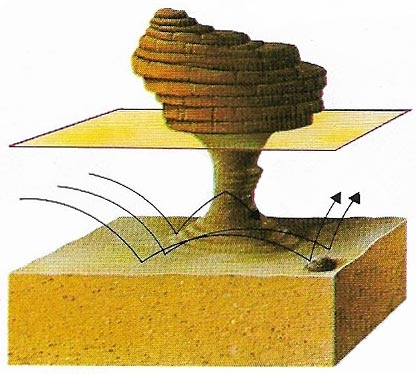 Fig 6. A pedestal is a large lump of rock supported only by a thin neck. In a sandstorm the wind is only able to make the sand grains bounce up to about 1 m (39 in) above the ground. When the sand collides with the rock, it sand-blasts it and wears it away. The dust and finer particles, which are carried higher, are too light to abrade the rock. Therefore the rock is eroded only at its base, which gives it the appearance of a mushroom. 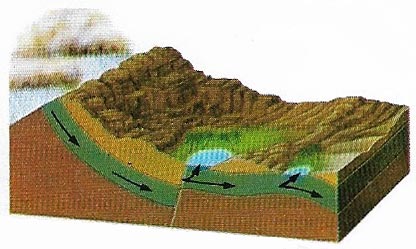 Fig 7. Rain falling on the Atlas Mountains drains into porous rocks underlying the Sahara. The water seeps through these rocks which, wherever they come to the surface, give rise to oases. 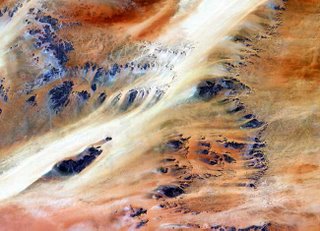 A desert is generally considered to be:

Deserts cover about one third of Earth's land area. There are two types: hot and cold.

Hot deserts typically lie between latitudes 20° and 30° north and south, though they also exist farther from the equator in the centers of continental landmasses. They can be described as areas where water precipitation from the atmosphere is greatly exceeded by surface evaporation and plant transpiration.

The worlds's major deserts, including the Australian, Kalahari, and Sahara, are found in the horse latitudes, where the permanent high pressure causes drought throughout the year. Deserts occur in various west coast areas where the influence of cool currents offshore makes the land even drier, with less than 100 mm (4 in) rainfall in places; for example the Atacama Desert in Peru (with the Humboldt Current offshore) and the Namib Desert in South Africa (with the Benguela Current offshore). There are deserts in the middle of the largest continents where no onshore winds can reach to bring any rainfall; for example, the Gobi Desert in Asia, and smaller examples in Nevada and New Mexico.

Groundwater exists but is normally far below the surface; here and there it is accessible as springs or wells. Irrigation has enabled reclamation of some desert land. Landscapes generally result from the surface's extreme vulnerability to erosion. Features include arroyos, buttes, dunes, mesas, and wadis. Human influence may assist peripheral areas to become susceptible to erosion; and thus temporarily advance the desert's boundaries.

Plants may survive by being able to store water, like the cactus; by having tiny leaves to reduce evaporation loss, like the paloverde; or by having extensive root systems to capture maximum moisture, like the mesquite. Animals may be nomadic, or spend the daylight hours underground. Best adapted of all is the camel.

The hot desert is not all sand; in fact only about 20 percent is covered by sand. Much is bare rock, often cut by deep wadis (intermittent riverways) or carved into fantastic shapes by winds. The landform of rock deserts is very angular. The rounded hill shapes of more humid lands are missing because there is no steady downwash.

In many desert tracts the sand has been blown away leaving a surface of boulders. Rock or boulder desert may grade into sand desert. At first there are dunes with no sand between them; then these pass into areas where the whole surface is sand-covered and is known as a sand sea.

The deserts of Asia and North America lie in the interior of those continents and are cut off from the rain-bearing winds by surrounding mountain ranges. The world's largest deserts stretch across Africa and great parts of Asia. Europe is the only continent with no large deserts.

Weathering, the process by which rock is broken down into sand and clay, takes place very slowly in the hot desert compared with ore humid lands. On many days the surface temperature of the rocks varies from about 5°C (41°F) in the cool of night to about 40°C (104°F) at midday. This results in a daily expansion and contraction of the rock surface, setting up strains that gradually break it up into sand. The small amount of moisture, mostly in the form of dew, may also cause slow chemical weathering.

Water from occasional downpours drains rapidly into the wadis, carrying with it loose stones, sand, or mud. It rushes down as a flash flood and the stones it carries erode the sides of the wadis. At the end of the wadi is a cone-shaped pile of stones and sand called an alluvial fan. The water sinks into this, leaving the coarse sediment it is carrying on top, and eventually drains out of the bottom taking with it only the finest material, mostly mud and dissolved salts. It then runs into large, flat areas and forms temporary shallow lakes. Within a few days the water has evaporated, leaving a mixture of salt and mud in what are called salinas.

Sand grains are not carried far in the air, but the strongest wind causes the grains to move in a series of bounces. Although they are never lifted more than 1 m (39 in) above the ground, the wind-blown particles "sand blast" any rock or pebbles in their path and polish the surface of any pebble facing the wind. If the direction from which the wind comes varies, the pebble will acquire several flattened surfaces giving it a pyramidal shape. Such a pebble is called a vetifact or a dreikanter. The sand also erodes the solid rock over which it is blown, etching out any softer or weaker parts and leaving the harder rock standing up in ridges called yardangs, or in "rock mushrooms" called zeugens.

A common feature of deserts is the sand dune of which there are two types: barchans and seids.

In cold deserts, water is unavailable during most of the year as it is trapped in the form of ice. Cold deserts include the Antarctic polar icecaps, the barren wastes of Greenland, and much of the tundra. (See also glacier.) Eskimos, Lapps, and Samoyeds are among the ethnic groups inhabiting such areas in the northern hemisphere. Their animal neighbors include seals and the polar bear.