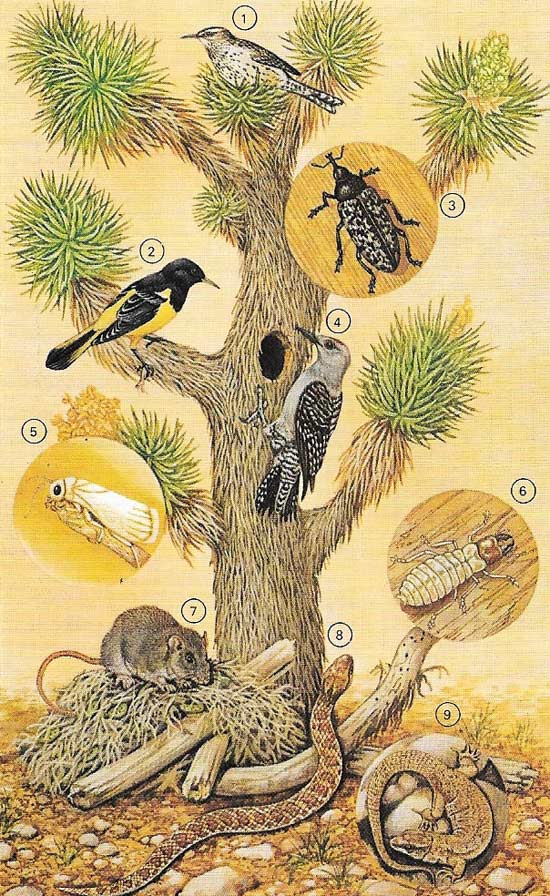 Fig 1. The Joshua tree (Yucca brevifolia) is found most notably in the Mojave and Colorado deserts, It plays host to a large number of animals. Dependent insects include weevils (Yuccaborus spp) (3) and termites(Paraneotermes spp) (6) while the yucca moth (Tegeticula alba) (5) is the tree's major pollinator. Small mammals, among them the pack rat (Neotoma magister) (7), build their homes at the tree base. Birds, including the small cactus wren (Campylorhynchus brunneicapillus) (4), Scott's oriole (Icterus parisorum) (2), and the gila woodpecker (Centurus uropygialis) (4), attracted by insects, nest among the leaves. Reptiles such as the spotted night snake (Hypsiglena torquata deserticola) (8) and the night lizard (Xantusia vigilis) (9) soon arrive to consume some of the abundant food. 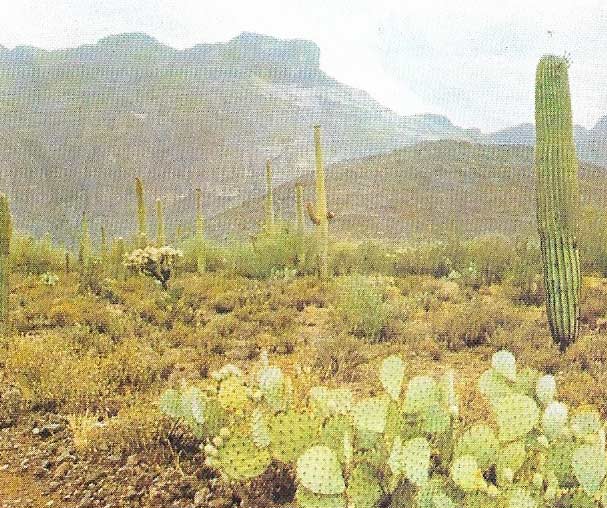 Fig 2. The desert, often thought of as a barren, inhospitable place, can support a wealth of plant life. The hot deserts of Mexico and North America are the home of most of the world's 1,500 species of cacti. These plants, which range in height from less than 2.5 cm (1 in) to over 15.2 m (50 ft), are the ones most often associated with the desert landscape. The prickly pear (Opuntia sp) and the tall upright giant saguaro (Cereus giganteus) seen here are two of the most common and spectacular. 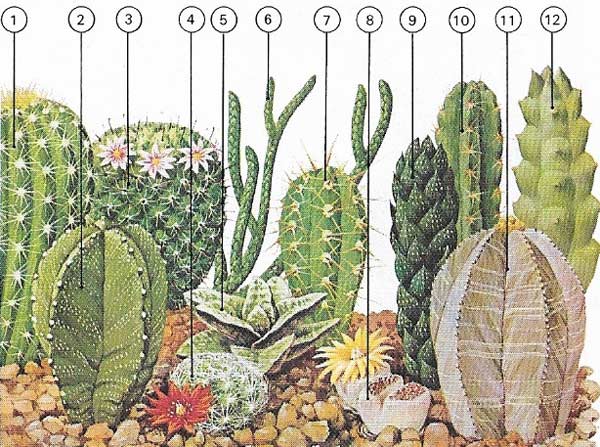 Fig 3. The cactus form is generally cylindrical or spherical to reduce surface evaporation. Few cacti (family Cactaceae) (1, 2, 3, 4, 7, 10) have leaves but many have sharp thorns or spines to discourage animals from eating them. The cactus form may be seen in other desert plants (11, 12) but most have succulent (5, 8, 9) or reduced (6) leaves. These belong to several families including the Crassulaceae (6), Stapeliaceae (12), Euphor biaceae (11), Liliaceae (5, 9), and the Aizoaceae (8). 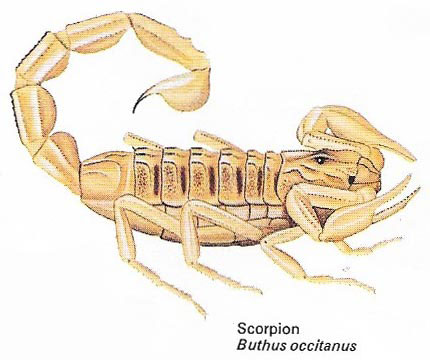 Fig 4. Scorpions can withstand great heat. They live on spiders and insects but will also attack other scorpions.

Fig 5. Some honey ants are living food stores accepting honey from the rest of the colony. Their abdomens distend to form food-filled globes from which others feed in drought periods. 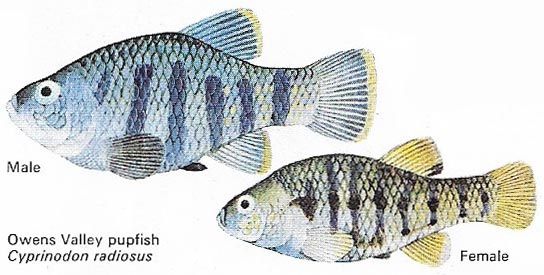 Fig 6. Pupfish are relics of an aquatics fauna that once populated certain desert zones when there were extensive lakes rather than arid sands. Male and female Owens Valley pupfish, together with several other species of fish, may still be found in the water pools of the American deserts, which are in fact vestiges of former great lakes.

Fig 7. The spadefoot toad, so-called because of the digging appendages on the hind feet, is one of several species of desert toads. It lives in a burrow for most of the year, emerging at night to feed on insects. If it rains the toad goes to the nearest pool, where males and females mate and the eggs are laid. The tadpoles then develop rapidly and by the time the waters have dried up have become mature adults, ready for burrowing. 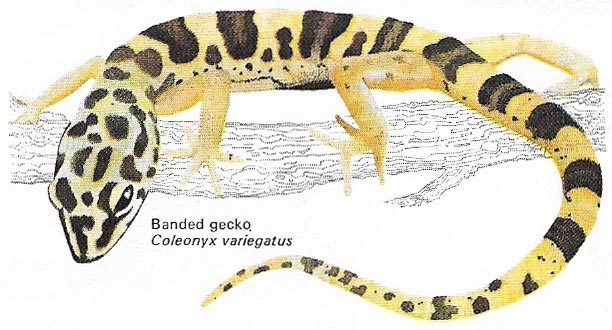 Fig 8. The banded gecko is one of a great many species of gecko inhabiting desert regions. It is nocturnal, hiding under rocks during the day and foraging for insects at night. 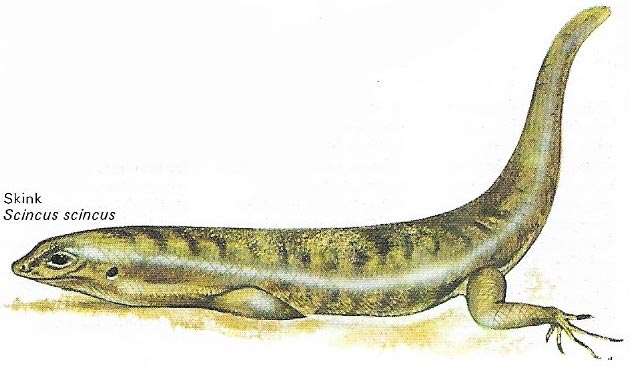 Fig 9. The skink is sometimes known as "sand fish". It seems to swim through the sand, pushing itself along with its flattened toes which are fringed with scales. It spends much of its time just beneath the surface looking for insects.

A desert is defined as an area with less than 25.5 cm (10 in) rainfall a year, supporting only a limited animal population. No two deserts are the same. They are of two types, known as cold or hot deserts depending on whether they are cold or warm in winter.


The distribution of deserts

Cold deserts are found in North America (the Great Basin), northern Asia (Gobi) and South America (Andean plateau-puna). The hot deserts are found in southern North America and Mexico (Mojave, Colorado, Arizona-Sonora, Baja California, and Chihuahua), in South America (Chile and Peru coast), northern and southern Africa (Sahara, Kalahari-Namib), and Australia. The plant and animal life supported by the desert is as varied as the people who share the same environment. But there is one factor common to them all: to a greater or lesser degree they have had to adapt to the harshness of desert life caused by the lack of water and shelter and the extreme changes in temperature. Temperatures as high as 56.7°C (134°F) have been recorded in the hot desert of Death Valley, California, and as low as -40°C (-40°F) in the Gobi and there are great changes in temperature from day to night. All living organisms in the desert – plants, insects, reptiles, birds, and mammals – depend upon water in some measure if they are to live, but in various ways they have evolved a capacity for surviving on the barest minimum supplies during the frequent periods of drought.

Desert plants (or "xerophytes", which is the name for plants living in an area where water is scarce) have adapted in various ways (Fig 3). Some plants can become dehydrated without permanent injury. Older leaves may dry up and die but young leaves, though drying and turning brown, will continue to grow when watered again.

Plants may also evade drought. The life cycle of a plant such as the Californian poppy is completed within a short space of time so that during the most arid months of the year it is below the surface in seed form where it can lie dormant for several years without rain. An interesting phenomenon of some desert plants is that only part of the seed germinates at the first watering; other parts have to be subjected to several falls of rain before growth of the seedling is possible. This helps to ensure the survival of the species.

Drought resistance is the most usual method of survival. Some plants shed leaves, so that they need less water to stay alive. Others grow extraordinarily deep roots to tap the reservoirs of water deep underground. Mesquite and acacia trees, for example, grow roots to a depth of 15 m (50 ft), while those of shrubs such as Atriplex halimus grow to 18 or 21 m (60–70 ft). Another way is for plants to develop root systems over a wide but shallow area to take maximum advantage of a brief fall of rain. Such root systems can run for more than a kilometer. Some plants die back to ground level surviving the drought as tubers and bulbs, while others store excess moisture within their stems to be used up as required. Many succulent plants (Aloe spp, Crassula spp) have leaves that are adapted for water storage. The long, silky hairs covering such cacti as Cephalocereus spp also help to prevent water loss. Desert plants provide shelter (Fig 1) for many animals, including varieties of birds, reptiles, and moths.

Insects exist in great numbers in the desert and they play an important part in the survival of the other desert-dwellers, some of which are exclusively insect-eating. The adaptation of these small desert inhabitants to the aridity and heat varies enormously (Fig 5). Some, such as the harvester ant, are physically unsuited to the terrain and so make their nests deep underground where they are only slightly affected by temperature. The harvester ant makes brief foraging expeditions above ground to collect seeds, most of which are stored against times of drought.

Many insects are nocturnal, sheltering during the day under rocks or just below the ground's surface. Diurnal insects (those that are active only by day) have either long legs to life their bodies above the hot sands, or the ability to fly, or climb on to plants. Most insects avoid dehydration by secreting on their cuticles a thin layer of wax that is relatively impermeable to water vapor. This layer is also impermeable to oxygen and carbon dioxide so a mechanism has evolved whereby the gases can cross the shell while water loss is kept to a minimum. Breathing is controlled via special apertures, known as spiracles, which are opened to facilitate respiration only when a sufficient level of carbon dioxide has accumulated in the body.

Reptiles form another group of desert creatures, and it is probably the group that feels most at one with its habitat (Fig 8). They are cold-blooded animals – unlike birds and mammals – which makes it impossible for them to maintain internal heat, so that they have to rely on the Sun to warm the surrounding air and ground in order to raise their body temperature. In extreme heat, however, their bodies become so hot that it is often necessary even for them to take shelter. They also have to find less exposed places at night to protect themselves from the cold. Snakes are more numerous in the desert than any other reptiles but because they are often nocturnal they are less obvious than the lizards that scurry about during the day.