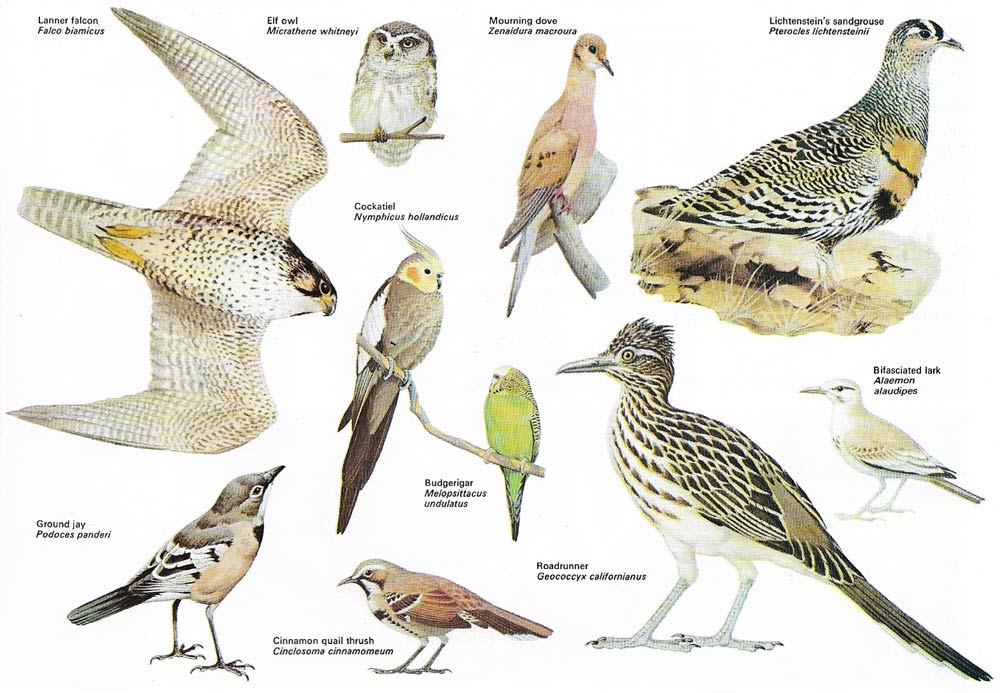 Typical desert birds include the lanner falcon, which feeds mainly on other birds. It has been a popular bird with falconers for thousands of years in Africa and Asia. The elf owl is one of the smallest of the owls, about 15 cm (6 in) long. It often nests in cacti using the abandoned nests of the gila woodpecker. The elf owl feeds on insects and occasionally on small birds. The mourning dove can withstand a variety of climatic conditions and so is at home in the desert. It breeds almost throughout the year. Lichtenstein's sand-grouse is unusual in that the male carries water to its offspring by soaking its breast feathers; the young drink from these. The water also coos unhatched eggs. The budgerigar is the native name for a little Australian parakeet well known as a cage bird in many parts of the world. In the wild it lives in large flocks in the semi-deserts of Australia, as does the widespread cockatiel. The roadrunner is noted among desert birds for its expertise in killing snakes. It does this by a series of quick stabs with its long, pointed beak. It rarely flies, but is a very fast, agile runner. The bifasciated lark has an unusually strong bill for digging out grubs and ant-lions from the sand to supplement its monotonous diet of seeds. The ground jay, so called because it has become almost totally ground-based, uses its wings only to increase its running speed. Its gray plumage effectively camouflages it in the desert. It nests in burrows or beneath bushes. The cinnamon quail thrush can survive the most severe drought. It seldom drinks and gets its water content from eating insects.

Fig 1. Desert rodents exist in large numbers, having successfully adapted to their environments by living in burrows. They include the desert jerboa, kangaroo mouse, naked-soled gerbil. They can make long, swift leaps with their powerful hind legs to escape from predators. Using their tails as rudders, they can alter course in mid-air. They are also protected by their sensitive hearing. 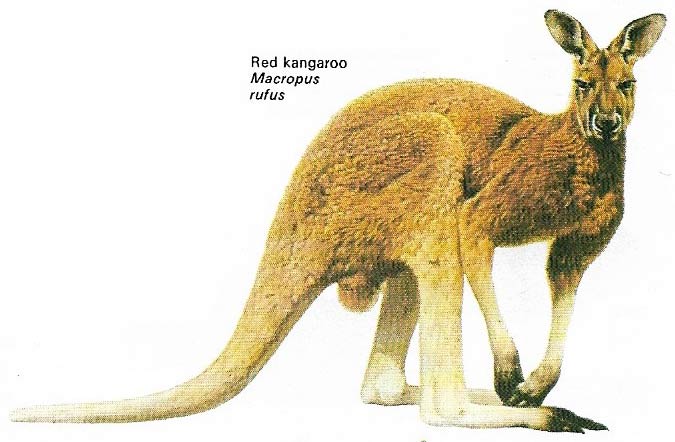 Fig 2. A hardy desert animal from Australia is the red kangaroo. Although widely distributed across the continent, its numbers have been reduced by hunting and the fencing of sheep ranges. Its urinary system, like that of the ground squirrel and kangaroo rat, has evolved to cope with desert conditions and its urine is highly concentrated. This desert mammal drinks only in periods of extreme heat and drought. Kangaroos such as this species are fames for their jumping ability. Recent studies have shown this to be a more efficient way of moving than the normal four-legged gait of other mammals. 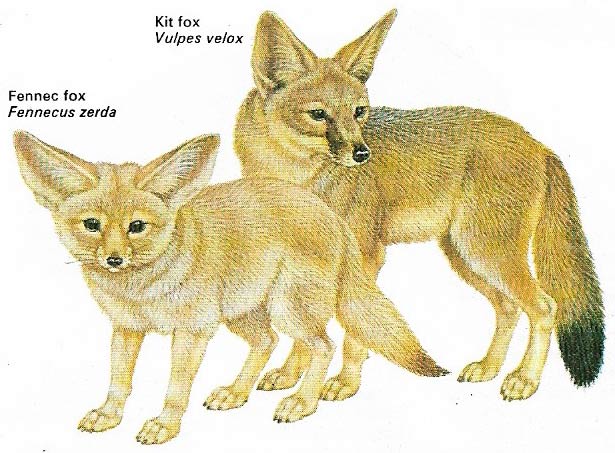 Fig 3. The kit fox and the fennec are similar but unrelated desert mammals. The kit fox is from the New World, the fennec from the Old, and both have adapted independently but in the same way to desert life. This is a case of convergent evolution – the development of similar characteristics by animal or plants of unrelated species. Both are nocturnal and live in burrows. They feed on insects, lizards, rodents, and birds which they detect with their large and sensitive ears. 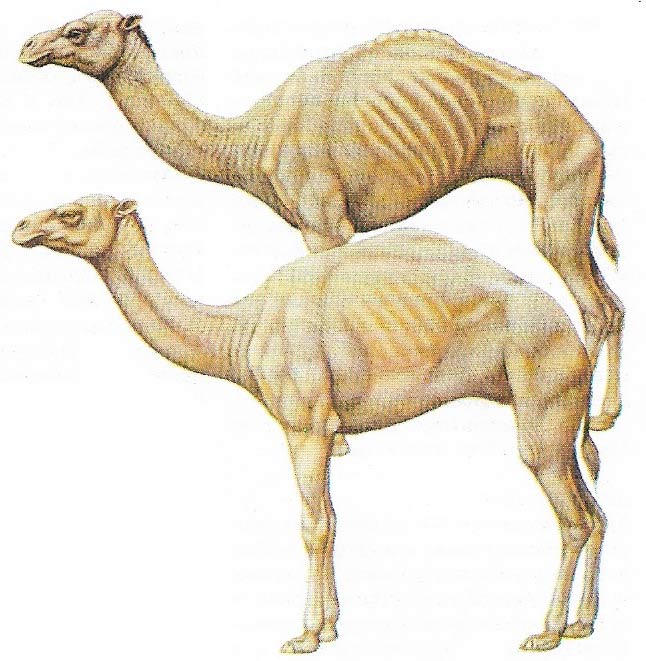 Fig 4. The camel can survive in the desert heat because of its ability to lose water amounting to 25 percent of its body-weight (above). No man could withstand such severe dehydration and live. Within ten minutes of drinking (below) the camel returns to its normal appearance.

There are fewer birds and mammals, especially large ones, in deserts than in other regions, but a surprising number do manage to survive in this harsh environment. They can only do so by adaptations of their behavior, life processes, and external coverings.

The camel (Camelus dromedaries) (key) is, because of its usefulness to man, one of the commonest and best known of the larger desert mammals. Unlike other large, indigenous desert mammals such as the addax (Addax nasomaculatus), which is threatened with extinction, camels are increasing in numbers.

The adaptations that enable the camel to live in desert conditions have been closely researched and the findings probably apply also to other large desert mammals. The camel has a remarkable ability to withstand heat, and its body temperature can fluctuate by as much as 6–7°C (about 12°F) without causing it distress. During the day the camel's body may heat up slowly to 40°C (105°F), and during the night may drop to 33.9°C (93°F). The camel's hump, which is a fat store, contributes indirectly to the control of its body temperature. The lack of insulating fat beneath the skin allows heat to escape easily and the animal's thick, woolly fur serves as insulation against the entry of heat.

The camel is also unusually adapted to reducing water loss from breathing, sweating, and excretion. If a human lost water amounting to 12 percent of his body weight they would die of "explosive heat" because, as water is lost, blood decreases in volume and becomes thicker, slowing down the circulation. Internal heat can no longer be dissipated from the skin and death quickly follows. The camel, however, cam lose up to 25 percent of its body weight in water and still maintain its blood volume by removing water from the body tissues. The camel's sweating reflex is not activated until its body temperature reaches about 40°C (105°F).

The increasingly rare addax is a member of the large cattle family (Bovidea) which includes the antelopes and sheep. It is even more resilient than the camel in that it does not need to drink water at all, because it takes in the moisture it needs by eating plants. Simply by sniffing the air, the addax can locate from great distances an area where rain has fallen. As a result, it can live in arid regions that no other mammal could tolerate, not even the well-adapted scimitar-horned oryx (Oryx dammah) – another animal related to the addax – which is at home in the Libya and Sahara deserts.

A well-known desert antelope is the graceful and fleet-footed gazelle (Gazella sp) of which there are several species, but the few remaining animals are a sad indictment of the "sportsmen" who shoot them with high-powered rifles and even machine-guns from motorized vehicles – proving that even swift species such as these can eventually be wiped out by such methods.

Relatively few large carnivores live in deserts: the cat family is well represented, but the only big cat is the cheetah (Acinonyx jubatus), the fastest land animal in the world. It is exceptional in its habits because, unlike the other members of its family, it does not stalk and pounce on an unsuspecting prey, but runs it down. The small desert cats tend to be nocturnal, lying in wait for other creatures of the night – their prey.

Very few members of the dog family inhabit deserts, but those that do are all similar in color and appearance (Fig 3). They are generally small with large ears and usually hunt by night. Such animals are omnivorous.

Rodents are the commonest of the small desert mammals. Most are nocturnal and pass the day in burrows. There, where the air is more humid than it is outside, they remain cool. Many do not drink, obtaining all their water from plants. Some are known to obtain water by the oxidation of the carbohydrates in their food, which is mainly dry seeds. They also have highly efficient kidneys which extract most of the water from their urine. Jumping as a means of movement has been developed in most of these desert rodents (Fig 1). Although they all look similar, they are not closely related and come from different continents. Jerboas (Jaculus spp) and gerbils (Tatera spp) are from Africa and Asia. Microrodipodops are from North America and Notomys from Australia.


Birds of the desert

Many birds live in the desert, from the tiny elf owl (Micrathene whitneyi) (top illustration) to the flightless ostrich (Struthio cameius), the largest bird in the world. Desert birds may feed on seeds or water-rich plants such as cacti but many, such as roadrunner (Geococcyx californianus) and the elf owl are predators, getting all the liquid they need from other animals. Birds that are mixed feeders, such as Pallas' sand-grouse (Syrrhaptes paradoxus), are often migrants or nomads.

Ostriches are well adapted to desert life. They obtain the water they need from the plants that they eat and merge well into the pale tones of the desert landscape when squatting on the ground. If threatened while on the nest, which is just a shallow scoop in the earth, the hen bird presses her long neck flat down on to the sand, making herself difficult to distinguish. This attitude has perhaps given rise to the mistaken belief that ostriches bury their heads as a defense.