Fig 2. The foehn effect. When warm, moist air (1) crosses a mountain range, it cools as it climbs the windward side and deposits most of its moisture as rain (2). On its descent on the leeward side of the range, the now drier air heats up much more rapidly (3), giving rise to hot, dry weather downwind. 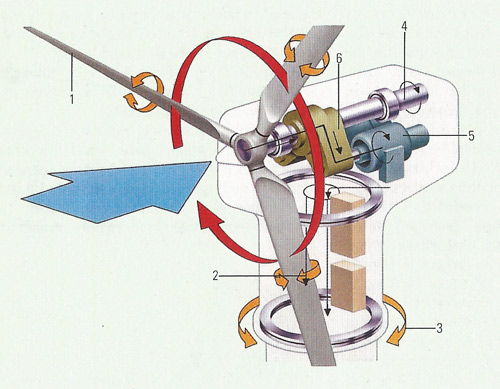 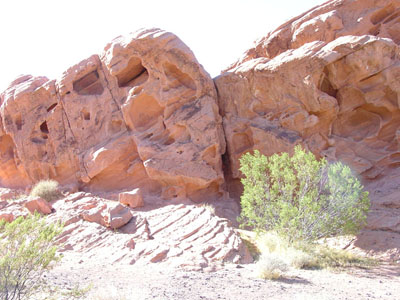 A wind is a body of air moving relative to Earth's surface. The world's major wind systems, or general winds, are set up to counter the unequal heating of Earth's surface and modified by Earth's rotation. Surface heating, at its greatest near the equator, creates an equatorial belt of low pressure (see doldrums, below) and a system of convection currents transporting heat toward the poles.

Earth's rotation deflects the currents of the northern hemisphere to the right and those of the southern hemisphere to the left of the directions in which they would otherwise blow, producing the northeast and south east trade winds, the prevailing westerlies, and the polar easterlies. Other factors influencing general wind patterns are the different rates of heating and cooling of land and sea and the seasonal variations in surface heating. Mixing of air along the boundary between the westerlies and the polar easterlies – the polar front – causes depressions in which winds follow circular paths, counterclockwise in the northern hemisphere and clockwise in the southern hemisphere (see cyclone).

Superimposed on the general wind systems are local winds, such as the Chinooks (see below), caused by temperature differentials associated with local topographical features such as mountains and coastal belts, or winds associated with certain cloud systems.


Winds around the world

A foehn wind blowing eastward from the Rocky Mountains, in Canada and the USA, and the European Alps, mainly in winter. The term is also applied to the warm, wet wind coming off the Pacific before it passes over the Rockies.

Regions of low wind, calms, and strong upward air movement around the equator, produced by the convergence of the southeast and northeast trade winds. Sailing ships were often becalmed there.

A warm, dry wind coming down the leeward slopes of mountains due to air having lost its moisture while ascending the windward slope, then warming on its descent (Fig 2).

A southern wind that blows across North Africa from the Sahara during spring and summer. It is very dry, with relative humidity sometimes as low as 10%. The name means "fifty" in Arabic, the number of days during which the wind is supposed to blow.

A cold, winter wind blowing north to south from the Central Plateau of France, down the Rhône valley, to the northwest Mediterranean. It is caused by cold air from Europe blowing southward into a low pressure area over the Mediterranean. When the mistral blows, temperatures sometimes fall as low as freezing point and strong gusts of 60 km/h (37 mph), or higher, make conditions unpleasant. It is a hazard to air and surface transport, crops, and buildings. Most farmhouses have rows of trees one their north side as protection from the wind, and many fields of fruits and vegetables shelter behind rows of cypress trees.

Prevailing winds that blow from the North and South Poles. They are deflected from east to west by the effects of the Earth's rotation, and are often known as the polar easterlies. They carry very cold air and their effect reaches as far as latitude 60°.

The predominant winds which blow between latitudes 30° and 60° both north and south of the equator. In the Northern Hemisphere they blow from the southwest; in the Southern Hemisphere, from the northwest.

Or simoon, a hot, dry wind or whirlwind occurring in the deserts of Arabia and North Africa. It usually carries much sand and greatly reduces visibility.

In southern Europe, a warm, humid wind from the south or southeast, originating over the Sahara Desert and gaining humidity from the Mediterranean.

A whirlwind is a rotating column of air caused by a pocket of low atmospheric pressure formed – unlike a tornado – near ground level by surface heating. Whirlwinds are far less violent than tornadoes. Those passing over dry dusty ground are sometimes called "dust devils."

A wind generator (Fig 3) converts the energy of the wind into electricity. Three-bladed, variable pitch designs are the most efficient. Variable pitch means the attitude of the blades can be changed. By altering the pitch (2) of the blades, they can generate at maximum efficiency in varying wind conditions. The whole rotor assembly rotates (3) into the wind. The blades turn a prop shaft (4), which links to a generator (5) through gearing (6). The largest wind farms have thousands of linked turbines and can produce the same power as a fossil fuel power station.

An aeolian structure is structure created by wind-transported material (Fig 4). It may be, for example, a sand dune or a shape carved in rock by the wearing away of softer materials.