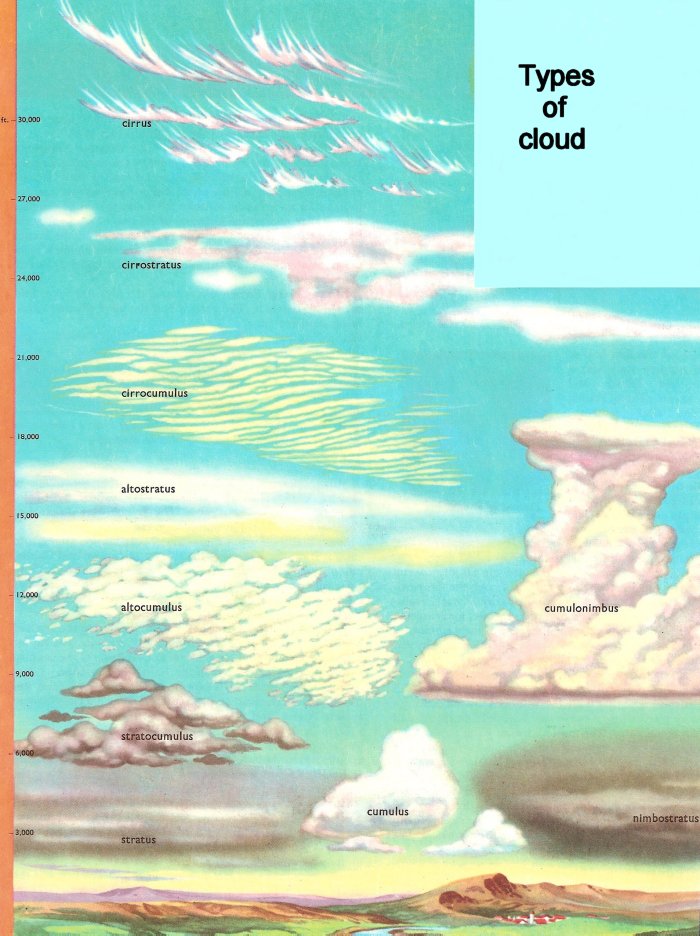 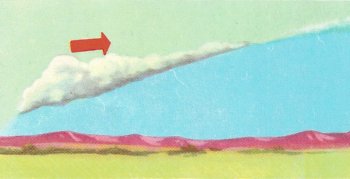 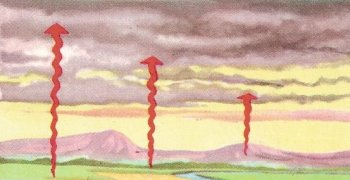 Clouds are collections of water (in liquid or ice phase) in the atmosphere that are often classified by their shape and height. Every day, vast amounts of water are evaporated from the Earth's surface and rise into the atmosphere as water vapor. Water vapor is invisible, but if its particles combine into tiny droplets of water or form ice crystals, then a cloud appears.

The change from water vapor to droplets of water is called condensation. This takes place when warm moist air is cooled, or when cool saturated air is cooled still further. We see the effect of warm moist air meeting cooler air when we breathe out on a cold winter day. In a similar way, if a mass of warm moisture-laden air meets a colder layer of air, condensation takes place and cloud will form. This happens if air which has been warmed by contact with the ground rises into the colder upper atmosphere.

Another type of cooling causing condensation and cloud is called adiabatic cooling. When air rises the pressure upon it is less and it expands. (You can experience the effect of air cooling by expansion if you hold a finger near a released cycle valve.) The rate of cooling is 1°F for every 300 ft of ascent. Droplets of water present in adiabatically cooled air condense into thin stratus clouds.

There are three main ways that clouds form when moist air is cooled. These are described below.

Moisture-laden air brought from over the sea by the wind may meet a range of hills near the coast. When this occurs, the air is forced to rise to pass over, thus cooling and condensation will take place.

A mass of cold air and a mass of warm air meet. The diagram shows a cross-section through the warm front of a depression. The warm air rises over the cold and clouds appear along the front. As the warm air climbs higher, different types of clouds form, according to the altitude. Highest of all will be cirrus. In order of decreasing height below cirrus are cirrostratus, altostratus, and nimbostratus. Thus the appearance of cirrus in the sky may herald the approach of a depression.

The rapid heating of the land in the summer may set off up-currents of warm air. These will cool with ascent and may form cumulus or cumulonimbus clouds. The diagram shows up-currents rising into the dark flat bases of these clouds. If the currents become very vigorous the clouds will grow to towering heights. Showers or thunderstorms may result.

In quiet (anticyclonic) conditions in summer, minor up-currents from the ground may produce the small clouds which look like puffs of cotton wool. These are known as fair-weather cumulus.

Cirrus clouds have a feathery appearance (cirrus means a curl of hair). They are made up of tiny ice crystals. They are the highest of clouds and lie from 5 to 7 miles above the ground.

Cirrostratus clouds also are formed by ice crystals. They look like a milky veil across the sky. The sun or moon shining through these clouds is surrounded by a luminous circle called a halo.

Cirrocumulus clouds are not common. They are cirrus or cirrostratus which have broken up and re-arranged their flaky remnants into lines resembling the ripples seen on the sea shore.

Altostratus is like thick cirrostratus, but is blue or gray in color. The sun or moon may be seen through it as though through ground glass. There is no halo effect.

Altocumulus clouds are fleecy and arranged in layers. They are formed of water droplets rather than ice crystals.

Cumulonimbus clouds are heavy and massive. They have a great growth upwards. The top may be 15,000 feet above the base. The base is horizontal and the upper layers are spread out; this gives the typical anvil shape. Cumulonimbus are noted as storm clouds. They produce showers of rain, hail, or snow, and may give thunderstorms.

Stratocumulus clouds vary in color from soft to dark gray. They present a rolling appearance and can cover the whole sky. Generally, however, some blue sky may be seen. Drizzle may fall.

Stratus is evenly spread like a fog, but does not rest upon the ground. It may produce drizzle. When broken up it is known as fractostratus.

Cumulus clouds are detached. They have a cauliflower-shaped outline and a horizontal base. A well-developed cumulus cloud seems rather like a heap of cloud. The upper surface has a sharp white outline; the base is darker.

A parameter that characterizes the reduction of light or energy through a cloud due to interactions with its water, ice or particle content. See also optical depth.

A measure of the location (altitude) of a cloud layer. Since pressure decreases in a smooth manner with height in the atmosphere, this gives the same information as cloud top altitude above mean sea level. Cloud pressure values are greater for low clouds and smaller for high clouds (so they vary in the opposite direction from the cloud altitude for these clouds).

The temperature of a cloud. However, what this means exactly depends on how the measurement is made. Most of the time we do not put a thermometer in the cloud, but instead determine this by remote sensing. And most clouds are not at a single temperature, but are generally colder at the top and warmer at the bottom. The temperature measured by remote sensing is often called a cloud effective temperature. It measures the temperature of the cloud mass within about 1 optical depth of the edge (where optical depth varies with wavelength, so that the measured temperature depends on the sensor being used, at least to some extent). Measurements made from orbit, then, will generally measure a lower temperature than those made from the ground (unless the cloud is thin).

This parameter tells how much water – either in the form of liquid drops or of ice crystals – that a cloud contains. It typically is measured over some finite region, not for a single cloud.