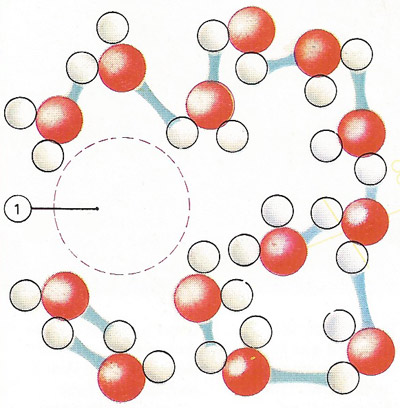 In all materials the atoms or molecules are in continuous motion. The energy of this motion depends on the temperature. In a liquid, the motion prevents any permanent intermolecular structure from forming, but forces of attraction govern the overall volume. In water there are many temporary linkages (shown blue) between the molecules; very small cavities [1] form and vanish, giving water an ever-changing structure.

Water (H2O) is a colorless liquid at room temperature, each molecule of which consists of an oxygen atom and two hydrogen atoms joined by covalent bonds. Terrestrial organisms are composed primarily of water (about 65% in the case of humans), and water is essential for life as we know it. Most biologically significant chemical reactions take place in an aqueous environment, and have done so on Earth for the past 4 billion years. Indeed, according to the standard theory of the chemical evolution of life (see life, origin), water provided the medium in which prebiotic molecules could move around and interact without being locked in place by strong covalent or ionic bonds.

So familiar is water, that we tend to forget how unusual a substance it really is. Of all water's properties, the most significant is its ability to form weak chemical associations, known as hydrogen bonds, with about 5-10% of the strength of covalent bonds. This ability stems from the fact that water consists of polar molecules, in each of which the oxygen atom has a slight negative charge and the two hydrogen atoms slight positive charges. The polarity of water causes it to be attracted to other polar molecules. When these other molecules are also water, the attraction is referred to as cohesion; when they are different, it is known as adhesion. The cohesiveness of water is what allows it to remain a liquid at moderate temperatures (whereas hydrogen sulfide, for example, which is chemically similar, exists as a gas). Water molecules always tend to form the maximum possible number of hydrogen bonds. When nonpolar molecules such as oils, which do not form hydrogen bonds, are placed in water, the water molecules act to exclude them. This forces the nonpolar molecules into association with one another: a tendency to aggregate known as hydrophobic exclusion.

Hydrophobic forces arising from the polar nature of water are thought to have been of central importance in the evolution of life. Firstly, they seem to have encouraged the formation of protocells and, in particular, the boundaries which enclosed them (see cell membranes, origin). Secondly, their influence is evident in the fact that some of the exterior portions of many of the molecules on which life came to be based are nonpolar. By forcing the hydrophobic portions of molecules into proximity with one another, water caused such molecules to assume particular shapes.


Water as a solvent

An aqueous solution is a solution in which water is the solvent. Water dissolves many polar substances, that is ionic compounds and covalent compounds with molecular dipoles, because the water molecules themselves are polar, with a negative charge on the oxygen atoms. They tend to cluster around positive ins (solvation), making the solution energetically favorable.


Other properties of water

Another crucial property of water, which is again a result of its polar nature, is its ability to resist changes in temperature. That is to say, water has a high specific heat. A lot of thermal energy has to be supplied to break the hydrogen bonds between water molecules and cause them to move around faster (resulting in a temperature rise). Even so, only about 20% of the hydrogen bonds are broken in heating water from its freezing point to its boiling point. By the same token, water holds its temperature longer than do most other substances when heat is no longer supplied. Only ammonia, which is more polar than water, has a higher specific heat.

Extensive hydrogen bonding also means that water has a high heat of vaporization. From this it follows that the evaporation of only a small amount of water is sufficient to carry away a great deal of heat, enabling organisms to rid themselves of excess body heat through evaporative cooling.

Seawater is a solution of several minerals in the ocean. It has a high concentration of microscopic life and tastes salty. The dissolved salt content varies between 3.3% and 3.7%, most of which is common salt (sodium chloride, NaCl) but nearly all elements are found in seawater, including vast reserves of magnesium, potassium, and calcium. Large amounts of nitrogen, oxygen, and carbon dioxide are present as dissolved gases. The freezing point of seawater of salt content 3.5% is -1.9°C (28.6°F).

Pure water prepared by boiling tap water and condensing the steam. It is essential for some chemical reactions, in which even the small traces of dissolved salts (such as the carbonates of calcium and magnesium) and other impurities present in tap water are intolerable. For many applications it has been replaced by deionized water.

Definite molecular proportion of water that is chemically combined with certain substances in the crystalline state. Much of this water will be lost on heating to about 100°C (212°F) but some, the water of constitution, will be retained to a much higher temperature. Copper (II) sulfate (CuSO4.5H2O), loses four molecules of water at 100°C becoming CuSO4.H2O.