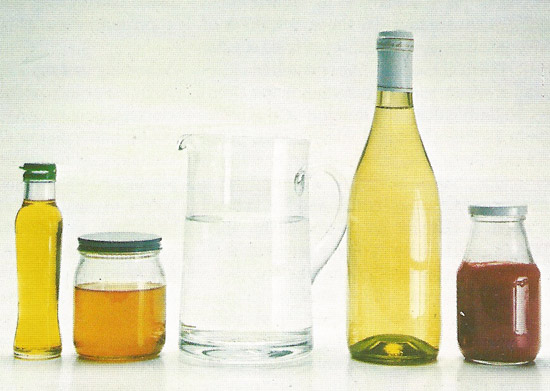 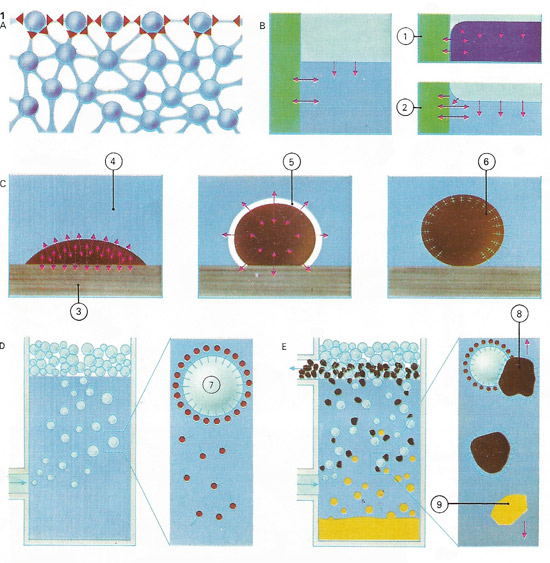 At the surface [A], the force between a liquid's molecules causes the surface to behave like a stretched membrane. The surface in a glass container [B] curves depending on whether the glass attracts liquid weakly (e.g. mercury [1]) or strongly (e.g. water [2]}. An oily liquid [C] adhering to cloth [3] is weakly attracted by water [4]; a detergent forms a new surface layer [5] attracted to both (detergent [6] is partly oil-like and partly salt-like). some detergents [D] prevent gas bubbles [7] collapsing, making it possible [E] to separate ore [8] clinging to them from earth and sand [9] by flotation. 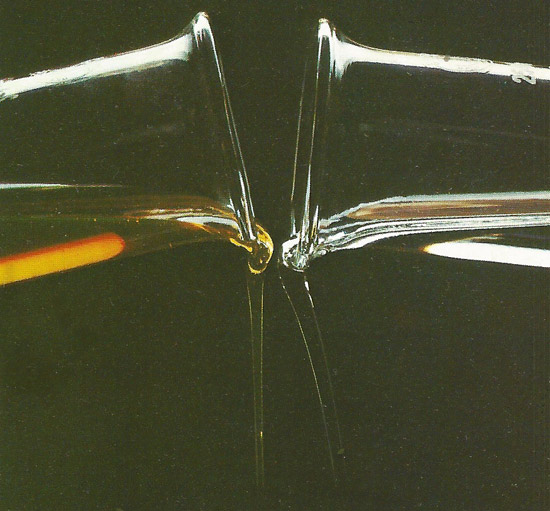 Oil is more viscous than water, as can be seen when each is poured. 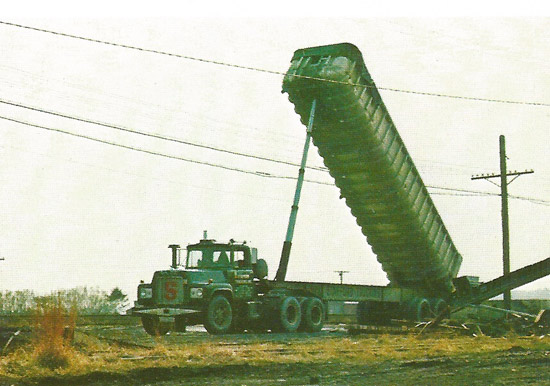 Hydraulic jack on a truck.

A liquid is the state of matter intermediate between a solid and a gas, in which the molecules are relatively free to move with respect to each other but are restricted by cohesive forces to the extent that the liquid maintains a fixed volume. Liquids assume the shape of the vessel containing them, but are only slightly compressible.

In liquids, the molecules are packed quite closely together so that each one is bonded to a number of neighbors. Given the position of one molecules it is possible to state how many more molecules should be found in contact with it. But still, as in the case of a gas, the pattern as a whole is a disordered one. The molecules are moving with just the same order of velocity as in a gas at the same temperature, though the motion is now partly in the form of rapid vibrations and partly translational. The configuration is therefore constantly changing.

This picture can be correlated with the macroscopic properties – the high density from the large number of molecules per unit volume, the lack of rigidity from the lack of order and the continual alteration of the arrangement. The comparatively close packing explains the low compressibility. The fairly high viscosity arises from the fact that the molecules have to wriggle past one another in this irregular but closely packed arrangement, rather like people moving past one another in a dense crowd, where slow relative movements are easy but rapid ones are difficult.


water, wine, and other familiar liquids

Motor oil is more viscous than water, as can be seen when each is poured; the water flows much more easily then oil because layers of water molecules slide over each other more easily than do layers of oil molecules. Normally, the viscosity of a liquid decreases with rise in temperature. Oil for a particular application must have the right lubricating properties and much research has been done to produce the correct oils for car engines and gear boxes, including oils whose viscosities change only a little when they got hot. When a liquid flows in a pipe in streamlined motion, the region in contact with the pipe is still and that near the axis has the greatest velocity.

Liquids are almost incompressible and as a result can transmit pressure. This important principle finds many applications in the branch of engineering called hydraulics. Many trucks have an hydraulic jack in which pressure transmitted by means of oil is used to tilt the load. A pump is used to provide the pressure and provision has to be made for the oil to run back when the pressure is released.

A water drop at the end of a glass tube takes its shape because of surface tension. The attraction between its molecules leads to a spherical shape as the "skin" effect caused by inward-acting forces in the surface holds the bulk of the liquid back. But a water droplet becomes a distorted sphere because gravitational as well as surface tension forces are acting on it.

The most common method of measuring temperature makes use of the expansion of a liquid on heating. A mercury thermometer has a wide range (-39°C to 360°C), but needs a large bulb (reservoir) and a narrow stem if small temperature changes are to be detected. Alcohol can be used in thermometers for measuring lower temperature; it expands more, but boils at 78°C. The great advantage of liquid-in-glass thermometers is that they can be read directly and carried easily.

When a liquid is heated, its molecules move more and more until, at the boiling point, the liquid turns into a gas or vapor. The heat energy needed to vaporize it is called the latent heat of vaporization. Similarly, when a liquid is cooled, its molecules move less quickly until they take up fixed positions and the liquid freezes into a solid. The heat needed to melt a frozen solid back to a liquid is called called the latent heat of fusion.

Even at ordinary temperatures (below boiling point) some molecules jump out of the surface of a liquid to form vapor – they evaporate. In a closed vessel there is an equilibrium between a liquid and its saturated vapor; the rate at which molecules leave the liquid is the same as that at which they re-enter it.

When a liquid boils, some work has to be done by the escaping vapor to overcome atmospheric pressure. If the pressure on a liquid is reduced it boils at a lower temperature. If the pressure is increased the boiling point rises. But if there are no tiny particles in the liquid on which vapor can form bubbles, boiling is suppressed. This effect causes the "bumping" that takes place when pure water is boiled and is the principle of the bubble chamber.

Water does not follow many of the general rules that apply to liquids. Most substances expand by between 5 and 15% on melting, for instance, but water contracts by about 10% and expands on freezing. These properties arise from the highly directional nature of intermolecular forces in water.