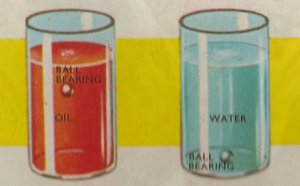 A ball bearing falls through very viscous oil (left) much more slowly than it does through water.

The degree of viscosity is related to the amount of force that has to be applied to it from the side to get it to move sideways, a quantity known as shearing. In equations where viscosity of fluid is a factor, it is indicated by μ (mu). All real fluids exhibit some amount of viscosity. Ideal fluids are said to be inviscid: there is no internal friction between the molecules. Ideal fluids are considered to determine how air behaves in theory and to serve as a starting point for examining how airflow behaves in real conditions.

The SI unit of viscosity is the pascal second (Pa·s), which has no special name. However, the pascal second is rarely used in scientific and technical publications. The most common unit of viscosity is the dyne second per square centimeter (dyne·s/cm2), which is given the name poise after the French physiologist Jean Louis Poiseuille (1799–1869). 1 Pa·s = 10 poise = 1,000 mPa·s.

Viscosity is due to internal friction within a liquid or gas. Gases are much less viscous than liquids, but even so there are frictional forces acting within them. Like liquids some gases are more viscous than others. For example, oxygen is more than twice as viscous as hydrogen under the same conditions of temperature and pressure.

On a cold day, olive oil is very "thick" and slow to pour. It has a high viscosity. As it is warmed it becomes more runny. Its viscosity decreases. This is true of all liquids – a rise in temperature leads to a drop in viscosity. If a liquid is too cold to pour properly, warming it will solve the problem. Exactly the reverse is true of gases. They become more viscous as the temperature rises.

Because air has a very low viscosity, an object falling through it is traveling at a much greater speed when it stops accelerating: i.e. the terminal velocity in air is much higher than that in oil or even water.

This does not contradict the statement that the acceleration due to gravity is 9.8 meters per second per second. Objects falling in a vacuum close to Earth's surface do accelerate at a rate of 9.8 m/s2. But in air, air resistance opposes the fall of the object. Heavy objects will have to fall very large distances before reaching their terminal velocities. In most cases they will hit the ground long before they acquire a steady speed, and their acceleration at the end of their fall will be practically the same as at the beginning.

The higher the velocity, the greater is the frictional force. This is why streamlining is so important for fast moving vehicles, but not so important for lower ones. Each raindrop accelerates and then falls with its steady terminal velocity. Not all the drops of rain are traveling at the same speed for the terminal velocity depends upon the weight of the raindrop. Frictional forces will balance the weight of small raindrops more quickly than large ones. Large raindrops fall more quickly than small ones. The smallest raindrop may have a velocity of only about 1 centimeter per second. Larger ones travel hundreds of times as fast.

Sizes of very small particles can be found by allowing them to fall through liquids of known viscosity (the mathematics of dealing with this is quite complicated). Where particles of a particular size are needed this provides a method of separating them from particles of other sizes.