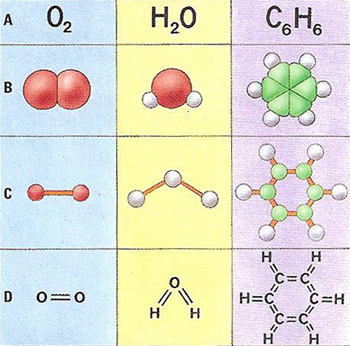 Molecules can be illustrated in four ways. Line one (A), the chemical formula, lists the type and number of atoms in a molecule but does not show their structure. Line two (B) is the closest representation of the actual shape of the molecule but does not detail the bonds between the atoms. Line three (C) is less realistic but does show the bonding. Line four (D) combines the chemical formula, using the abbreviations of the periodic table, and the symbolic, representation of the bonding structure.

Molecules range in size from two atoms to macromolecules, such as proteins and polymers, with molecular weights of 10,000 or more. The chief properties of molecules are their structure (bond lengths and angles) – determined by electron diffraction, X-ray diffraction, and spectroscopy – spectra, and dipole moments.

A molecular model is a geometrical structure of a molecule made by joining small colored balls, representing atoms, using stiff metal springs or plastic rods, representing single bonds. They are invaluable aids not only in visualizing shapes of molecules but also in indicating "strain" in bonds and possible conformations that the molecule may adapt in reactions.

Explanation of how electrons are distributed in stable molecules. In the simpler valance theory of the chemical bond, each atom of a molecule is assumed to retain its own electrons. Molecular orbital theory, however, treats each electron as associated with the molecule as a whole and it describes the configuration of electrons for each molecule. These patterns are unique for each molecule and can be considered as regions surrounding the molecule in which there is a probability of finding an electron. The calculations are very complex and only the simplest molecules can be treated exactly.