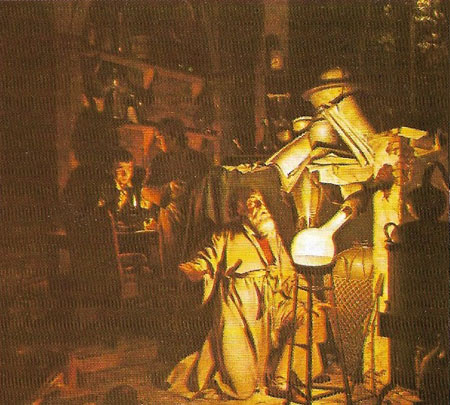 Phosphorus (P) is a highly-reactive, poisonous, nonmetallic element (see nonmetal) that occurs naturally in phosphates, notably apatite (Ca3(PO4)2). It was discovered by Hennig Brand in Hamburg in 1669 (Fig 1). The name comes from the Greek phosphorus, meaning "bringer of light," because it glows in the dark. It is the eleventh most common element in the Earth's crust.

Phosphorus forms phosphorous (trivalent) and phosphoric (pentavalent) compounds. It burns in air to give the trioxide and the pentoxide, and also reacts with the halogens, sulfur, and some metals. Phosphorus pentoxide (P4O10) is a white powder and very deliquescent (forming phosphoric acid), and is used as a dehydrating agent.

Phosphorus occurs in several allotropic forms, the most common of which are white phosphorus and red phosphorus (Fig 2). The former is a waxy, yellowish-white, very inflammable, and poisonous solid. It can only safely be kept under water. Red phosphorus is a non-poisonous, dark red powder that is not very inflammable.

White and red phosphorus are monotropic allotropes – the latter is stable at all temperatures up to its melting point. However, at ordinary temperatures the conversion of the white allotrope into the red form is extremely slow. But the standard method for preparing phosphorus by heating together calcium phosphate, silica, and coke yields the white form.

The red allotrope must then be obtained from the white. This is done by heating the white variety for several days at a temperature of 270°C. Since white phosphorus is highly inflammable even at room temperatures, great care has to be taken to avoid explosions. The white allotrope is placed in a cast iron or steel pot with a close fitting lid which incorporates a safety pipe. Air is excluded from the pot. After four or five days, the temperature of the pot is raised to 400°C so that the unchanged white allotrope may be distilled off. After cooling, the hard red cake left behind is ground under water and then boiled with caustic soda to remove any residue of the white allotrope. Red phosphorus is finally washed with hot water, filtered, and dried under vacuum.

There is a third, rare, allotropic form of phosphorus, which can be made by heating the red form under pressure. This is called black phosphorus.

Phosphorus is an element essential to life as we know it. It is present in all DNA and RNA. Also, calcium phosphate is the primary constituent of animal bones. For more on the biological and medical significance of phosphorus, see phosphate. For information about phosphorus poisoning, see below.

In some forms of alien biology, phosphorus could conceivably play an even more central role. See phosphorus-based life.

In the 17th century alchemists used many materials in their search for the "philosopher's stone," a supposedly magical substance that would turn base metals into gold. In 1669, while trying to make the philosopher's stone Hennig Brandt discovered phosphorus. It dripped from his retort in waxy, yellow drops which astonished him by catching fire when warmed slightly, and which glowed in the dark.

News of Brandt's discovery must have spread rapidly, and although he tried to keep it a secret, enough information leaked out about the method of obtaining it for the alchemist Kinkel to duplicate his experiment. A few years later the English scientist Robert Boyle also managed to prepare phosphorus. Apparently Brandt sold his secret to Johann Krafft, of Dresden, and Boyle certainly taught the method to a London chemist called Godfried Hankwitz. For many years only Hankwitz managed to make phosphorus in any quantity, and he supplied the precious material to the whole of Europe under the name of "English Phosphorus." In 1737 a better method of obtaining phosphorus, from urine, was developed in France, but it was not until 1775 that phosphorus became plentiful when the Swedish chemist Scheele discovered that it could conveniently be made by distilling bones with sand and charcoal.

Later investigators showed that phosphorus could be obtained from many of its compounds, such as phosphate rock, by heating them to very high temperatures with silica and coke (carbon).

In 1831 the Frenchman Charles Sauria invented a "strike-anywhere" match, the head of which contained a mixture of white phosphorus, potassium chlorate, gum, and starch. These matches ignited when they were rubbed on a rough surface. Sauria unfortunately didn't realize how poisonous white phosphorus was, and many thousands of match-makers were killed or crippled as a result of absorbing phosphorus into their bodies.

Modern "safety matches," invented in 1844, still use phosphorus, but it is coated on the side of the box and consists entirely of the red allotrope. The match head is composed of antimony(III) sulfide and potassium chlorate, and the striking surface is composed of powdered glass and red phosphorus. The act of striking converts some of the red phosphorus to white by friction heat. This small amount of white phosphorus then ignites and starts the combustion of the match head.

Yellow phosphorus is readily absorbed by the body and is highly poisonous. Red phosphorus cannot be absorbed and is nontoxic. Most cases of phosphorus poisoning occur in industrial workers who accidentally ingest the chemical or inhale its vapor. Acute poisoning, due to absorption of comparatively large amounts of phosphorus over a short period, causes damage to the liver, kidneys, central nervous system, and other organs.

Symptoms of acute phosphorus poisoning include burning abdominal pain, an odor of garlic on the breath, nausea, vomiting, bloody diarrhea, jaundice, and symptoms of liver and kidney failure. In severe cases, or untreated milder ones, delirium, seizures, unconsciousness, and death may occur within about 48 hours of initial poisoning.

Chronic poisoning, due to taking in small amounts of phosphorus over a relatively long period. may cause gradual destruction of the jawbones (a condition known as phosphonecrosis), cirrhosis of the liver, and kidney damage. This is now very uncommon.

Treatment of acute poisoning consists of washing out the stomach with copper sulfate, along with injections of calcium and treatment for liver and kidney failure.

Phosphine, which is phosphorus hydride (PH3), is a colorless, highly poisonous gas made by the reaction between calcium phosphide and water or dilute acid. Traces of diphosphine impurity make the gas spontaneously flammable. Pure phosphine finds application in doping semiconductor materials.