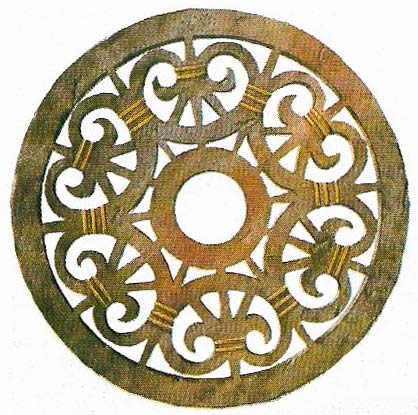 This iron rosette, dating from the 7th century BC, once decorated an Etruscan chariot. Techniques of working iron and, earlier, copper and bronze go back thousands of years. They allowed man to make tools and weapons, implements that advanced both agriculture and warfare. Extradition and purification of metals probably developed accidentally, but led to the founding of present-day chemistry. 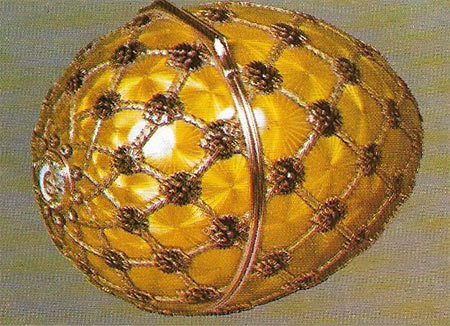 Precious metals often occur as the free elements in nature. Not only gold and silver, which for centuries have been used in jewelry and ornamentation, such as this Fabergé egg, but others such as platinum and iridium also come into this category. Silver and mercury are borderline cases. Mercury, for example, occurs as its sulfide but heating releases the metal, which readily alloys with other metals.

In chemistry, a metal is a material in which the highest occupied energy band (conduction band) is only partially filled with electrons. In terms of physical properties, metals:

• Are good conductors of heat and electricity. The electrical conductivity of metals generally decreases with temperature
• Are malleable and ductile in their solid state
• Show metallic luster
• Are opaque
• Have high density
• Are solids (except mercury)
• Have crystal structure in which each atom is surrounded by eight to twelve near neighbors

• Have one to four valence electrons
• Have low ionization potentials; they readily lose electrons
• Are good reducing agents
• Have hydroxides that are bases or amphoteric    • Are electropositive

Most metals are found as ores; only a few, such as gold and silver, occur in a native state. Alloys are easily formed because of the nonspecific nondirectional nature of the metallic bond.

Mercury is exceptional in being a liquid at room temperature. Sodium and potassium are examples of metals that are soft and chemically very reactive; they tarnish quickly in air and are most familiar as their salts. The lightest metal is lithium, which is also very reactive. The heaviest is osmium, which is 22.6 times denser than water and is one of the platinum group, relatively unreactive metals that include ruthenium, rhodium, palladium and iridium.

Malleability and ductility are further metallic characteristics. Gold is the most malleable of all metals; it can be beaten so thin as to be virtually translucent. Some metals have very high melting points and various high-temperature applications: tungsten, with the highest melting point of all at 3,410°C (6,170°F), is employed in light bulb filaments. Aluminum, followed by iron, and the two most abundant and useful of metals. Titanium, although rarely seen as the metal, is more commonly distributed than the more familiar copper, zinc, and lead. Other metals of great economic importance, because of their radioactivity, are uranium and plutonium.

A base metal is a common, cheap metal. Typical examples are lead and iron which, like other base metals, tarnish or oxidize on exposure to air or moisture. Such properties distinguish base metals from gold, platinum, and silver and other so-called precious or noble metals. In chemical terms, base metals are those at the negative end of the electrochemical series. In ancient times, it was an unfulfilled ambition of alchemists (see alchemy) to convert base metals into gold.

A noble metal is any of the unreactive, corrosion-resistant precious metals, comprising the platinum group, silver, and gold, and sometimes rhenium.

A metal foil is a metal rolled or beaten into a very thin sheet. Commonest is aluminum foil (having largely replaced tin foil), used extensively in packaging and in the home in the storage or cooking of food. Gold foil is used decoratively and in electronics. Lead foil is used as a radiation shield.

Metals have many more empty orbits than electrons available to fill them. For example, iron requires 5 electrons to fill its outermost 3d orbital.

A metallic crystal is the type of crystal formed by most metals, in which the outer electrons are shared by the crystal as a whole. Thus, the positively charged metal ions in the crystal lattice are surrounded by a "gas" of free electrons. These free electrons account for the fact that most metals are good conductors of heat and electricity.

Metal fatigue is deterioration and progressive cracking of metal parts caused by repeated and relatively low stresses. Imperfections in crystal grains, which often occur at notches, screw threads, welding defects, etc., accumulate after numerous cycles in which a small inelastic strain is applied, often leading to eventual failure. Fatigue failure is guarded against by careful design.

In astrophysics, a metal is any element heavier than hydrogen and helium. An object's metallicity is its abundance of such elements, or, often, more specifically, the abundance of iron, which is easy to measure. The terms metal-poor and metal-rich are used to indicate low metallicity and high metallicity, respectively.