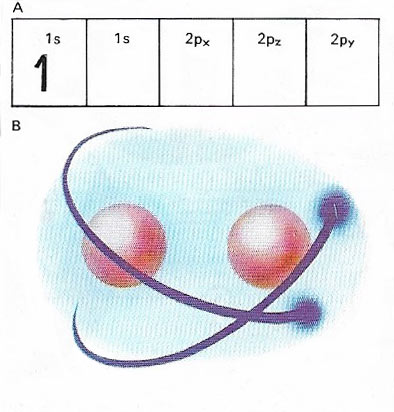 A hydrogen molecule, H2, is a diatomic molecule made up of two covalently bonded hydrogen atoms. The two nuclei share each other's 1s electrons (A). As two hydrogen nuclei come together (B), and electron sharing commences, energy is released. The positively charged nuclei repel one other and partly counteract the binding force of the electrons. This keeps the nuclei a roughly constant distance apart, called the bond length. 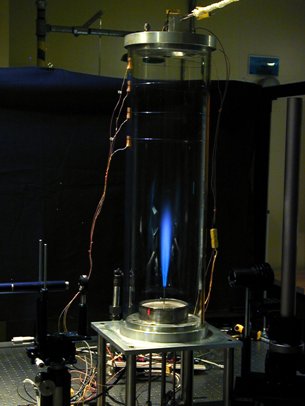 Hydrogen is a colorless, highly flammable, gaseous element. It is the first and lightest element in the periodic table. Hydrogen was first recognized as a distinct substance by Henry Cavendish in 1776, although it had been made much earlier by chemists and alchemists in their experiments with metals and acids. It was named by Antoine Lavoisier from the Greek hydro ('water') and genes ('forming').

Hydrogen is the most abundant element in the universe (see elements, cosmic abundance) and one of the most important to life as we know it.

Hydrogen atoms are the least massive of all atoms. The lightest and most common isotope of hydrogen, 1H, is known as protium and consists of one proton and one electron. Two other isotopes of hydrogen exist. They are deuterium, or "heavy hydrogen", with a nucleus containing one neutron and one proton, and radioactive tritium with a nucleus containing two neutrons and one proton. Hydrogen is the only element whose isotopes have been given different names.

A hydrogen ion is a hydrogen atom that has lost or gained an electron, and in consequence has a charge. The positive hydrogen ion (H+), having lost its only electron, consists of just a proton.

Chemically free hydrogen ions are rarely formed and dissociation to H+ occurs only when the resultant ion can be complexed. Thus hydrogen chloride (HCl) gas is undissociated but gives [H(H2O)n]+Cl- and [NH4]+Cl- with water or ammonia.

Hydrogen is fairly reactive, giving hydrides with most other elements on heating, and a moderate reducing agent. It belongs in no definite group in the periodic table, but has some resemblance to the halogens in forming the ion H-, and to the alkali metals in forming the ion H+ (see acid); it is always monovalent. See also hydrogen bond.

Hydrogen fluoride (HF) is a colorless liquid, fuming in air; a covalent hydride, preparing by distilling fluorite with concentrated sulfuric acid. Its physical properties showing typical anomalies due to hydrogen bonding. Hydrogen fluoride is a very strong acid, and an ionizing solvent for many inorganic and organic compounds; it is used to make fluorine and its compounds, especially Freon and fluorocarbons. Melting point -83°C, boiling point 20°C.

Hydrofluoric acid, a solution of hydrogen fluoride in water, is (anomalously) a weak acid, but causes very severe burns and is toxic. It dissolves silica to give fluorosilicic acid (H2SiF6), and so is used to etch glass.

Large amounts of hydrogen are used commercially for making ammonia by the Haber process, and for the hydrogenation of fats and oils. It is also used in methanol production, in hydrodealkylation, hydrocracking, and hydrodesulfurization, and in oxyhydrogen torches.

The hydrogen fuel cell is a developing technology that will allow much electrical power to be obtained using a hydrogen gas.

Liquid hydrogen is used as a cryogenic propellant in rocket engines. Hydrogen gas turns to liquid under standard atmospheric pressure at -262.9°C. When oxidized by liquid oxygen, liquid hydrogen delivers about 40% more thrust per unit mass than other liquid fuels, such as kerosene. Molecular weight: 2.016; density: 0.071 g/ml. Commonly referred to in rocketry as LH2.

Hydrogen can be prepared, industrially and in the laboratory, by a variety of methods, including:

· steam on heated carbon
· decomposition of certain hydrocarbons with heat
· reaction of sodium or potassium hydroxide on aluminum
· electrolysis of water
· displacement from acids by certain metals.


Ortho- and para- forms of hydrogen

Quite apart from isotopes, it has been shown that under ordinary conditions hydrogen gas is a mixture of two kinds of molecules, known as orthohydrogen and parahydrogen, which differ from one another by the spins of the protons in their nuclei. In orthohydrogen the protons have opposite spin; in parahydrogen they have the same spin. Normal hydrogen at room temperature contains 25% of the para- form and 75% of the ortho- form. The ortho- form cannot be prepared in the pure state. Since the two forms differ in energy, the physical properties also differ. The melting and boiling points of parahydrogen are about 0.1°C lower than those of normal hydrogen.

Metallic hydrogen is a hypothetical form of hydrogen in which the molecules have been forced by extremely high pressures to assume the lattice structure typical of metals. It is estimated that as much as 40% of Jupiter's mass (but not more than 3% of Saturn's) may be in the form of metallic hydrogen.

Hydrogen makes up the bulk of most stars and gas giant planets. In space, it may exist in atomic (see H I region), ionized (see H II region), or molecular form (see molecular cloud). The presence of atomic hydrogen in space can be mapped by observations of the 21-centimeter line.