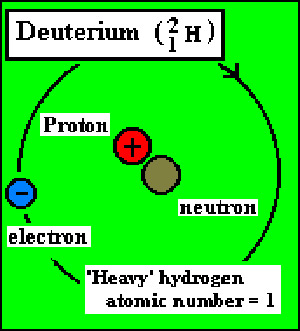 Deuterium is a heavy isotope of hydrogen in which the nucleus contains one proton and one neutron (compared with ordinary hydrogen's single proton). Deuterium was discovered and named (from the Greek deuteros meaning "second") by Harold Urey in 1931. In chemical equations it is denoted by the letter "D". The weight of the deuterium molecule, D2, is twice that of the hydrogen molecule, H2. Just as hydrogen forms the oxide H2O (ordinary water), so deuterium forms the oxide D2O (heavy water). A nucleus of deuterium is called a deuteron. On Earth, one atom of deuterium is found in about 6,000 ordinary hydrogen atoms. Deuterium is used as a moderator to slow down neutrons.

The abundance of deuterium naturally in compounds such as water, and in interstellar space, is about 1.4 × 10-5 that of ordinary hydrogen. Because deuterium is difficult to manufacture and is quickly destroyed in stellar nuclear reactions, one view is that most of the deuterium found in the universe today was formed in the Big Bang. It is an important fuel for nuclear fusion (as in the hydrogen bomb) and is used in tracer studies. Melting point -254.6°C, boiling point -249.7°C.