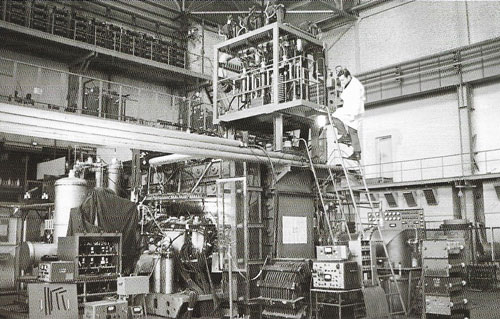 The Tokamak-3 nuclear fusion reactor at the Kurchatov Institute of Nuclear Power near Moscow, built in 1960.

Nuclear fusion is the joining together of two light nuclei at high temperatures to form a heavier nucleus with the release of a large amount of energy. A fusion reaction occurs when two light nuclei approach each other so closely that their Coulomb (charge) repulsion is overcome, allowing the nuclei to fuse. The total mass of the fusion products is lower than that of the two original nuclei; the difference is converted to kinetic energy which is distributed between the products.

Methods being investigated in an attempt to harness this potentially huge source of energy on Earth include magnetic confinement fusion (the use of strong magnetic fields to confine plasma so as to allow fusion reactions to occur within it) and inertial confinement fusion (the use of high-powered lasers or other beam devices to implode a pellet of material to such high densities that fusion occurs).

Main sequence stars produce light and heat through the fusion of hydrogen into helium in their cores. In red giants, successively heavier nuclei fuse, at higher temperatures, to form elements such as carbon, oxygen, and silicon (see stars, evolution) which are the basis of Earth-like planets and life.

Various forms of fusion have been considered for use in nuclear propulsion for spacecraft. See Project Orion, Project Daedalus, and microwave-induced fusion propulsion.

In 1920, while engaged in a search for neon isotopes, the British physicist Francis Aston measured the mass of hydrogen and helium Atoms and discovered that four hydrogen atoms weighed more than a single atom of helium. The significance of this was seen immediately by the British astrophysicist Arthur Eddington, who realized that the differential in mass of helium and hydrogen atoms as measured by Aston was the mechanism that allowed the sun, through the conversation of hydrogen into helium, to shine, producing heat and light.

Nuclear fusion – the conversion of matter into energy that occurs when atomic nuclei are brought together to create a larger, more stable nucleus – occurs naturally within stars. Our sun fuses more than 600 million tonnes of hydrogen into helium every second. But replicating that "artificially" on Earth, on a large scale via a process that does not involve the detonation of a hydrogen bomb (the only process by which any meaningfully large amount of fusion has so far been achieved), is an entirely different proposition.

Research in nuclear fusion increased around the world after World War II, although individual state-sponsored programs were orientated toward military uses and independent of each other. In 1958 this changed with the "Atoms For Peace" conference in Geneva, Switzerland. For the first time, research became coordinated and information was shared. It was agreed in Geneva that nuclear fusion was an achievable goal, but it was also acknowledged that inherent plasma instabilities meant that many hurdles would need to be overcome. The first fusion-generating devices, called "tokamaks," were designed and built in Russia in the late 1960's, and today the Joint European Torus tokamak near Oxford in the United Kingdom holds the record for fusion generations: it produced 16 megawatts of energy in a single second.