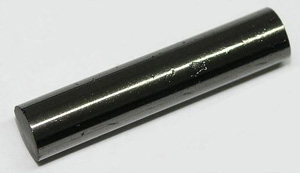 Fig 1. A rod of vitreous, or glassy, carbon: an advanced material of pure carbon combining glassy and ceramic properties with those of graphite. Unlike graphite, vitreous carbon has a fullerene-related microstructure. Image copyright: smart-elements.com. 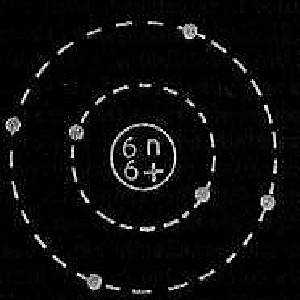 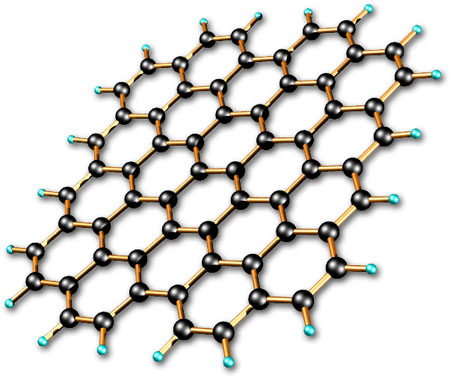 Fig 3. The arrangement of carbon atoms in graphene.

Carbon (C) is a nonmetal element in group IVA of the periodic table. Carbon is unique among elements in that a whole branch of chemistry – organic chemistry – is devoted to it, because of the vast number of compounds it forms. Only the simplest of carbon compounds, such as carbon dioxide, carbon monoxide, and those described below are usually regarded as inorganic.

Carbon occurs in nature both uncombined (e.g., coal, diamond) and as carbonates, carbon dioxide in the air, and petroleum. It exhibits allotropy (see "Forms of carbon" below). Carbon has several isotopes: C12 (used as a standard for the atomic mass unit) is much the most common, but C13 makes up 1.11% of natural carbon. C10, C11, C14, C15, and C16 are all radioactive (see radioactivity). Carbon-14 has the relatively long half-life of 5,730 years, and is continuously formed in the atmosphere by cosmic ray bombardment; it is used in radiocarbon dating.

Carbon as an element, and especially as diamond, is rather inert, but all forms of it will burn in air at a high temperature to give carbon monoxide in a poor supply of oxygen, and carbon dioxide in excess oxygen. Fluorine will attack carbon at room temperature to give carbon tetrafluoride, and strong oxidizing agents will attack graphite. Carbon will combine with many metals at high temperatures to form carbides (see "Inorganic compounds of carbon" below). Carbon shows a covalency of four, the bonds pointing toward the vertices of a tetrahedron, unless multiple bonding occurs.

Carbon is the fourth most common element in the universe (see elements, cosmic abundance) and the basis of all terrestrial life (see elements, biological abundance). Astrobiologists suspect that carbon-based life may be common through the universe. Given the unique ease with which carbon forms long, complex chains and rings, it is difficult (though not impossible) to imagine life with a different chemical basis such as silicon.

Carbon is found free in nature in three main allotropic forms: amorphous (as in charcoal), graphite, and diamond. Graphite is one of the softest known materials while diamond is one of the hardest. Another recently-discovered form of carbon are fullerenes, which consist of large polyhedral molecules containing scores of carbon atoms, called buckyballs, cylindrical molecules called carbon nanotubes, or graphene.

Carbon black is a form of carbon made by heating or burning hydrocarbon gases in a restricted air supply. The product contains a little hydrogen, oxygen, and sulfur as well as carbon. Carbon black is used to reinforce rubber (for vehicle tires) and other materials, and in various dark pigments for paint and inks.

Charcoal is an amorphous form of carbon produced when wood, peat, bones, cellulose, or other carboniferous substances are heated with little or no air present, or are destructively distilled, for example in a kiln or retort. A highly porous residue of microcrystalline graphite remains. Charcoal has a high energy density and is used as a fuel and was used in blast furnaces in the manufacture of steel until the advent of coke. Charcoal is also used as a thermal insulator, by artists for drawing, in the manufacture of gunpowder, as a decolorizing agent, and in sugar refining and solvent recovery. A highly porous form, activated charcoal, is made by heating charcoal in steam; it is used for adsorption in refining processes and in gas masks.

Graphene is a form of carbon, first isolated in 2004, consisting of one-atom-thick sheets of carbon atoms in a hexagonal, 'chicken-wire' arrangement (see Fig 3). The molecular structure is like that of graphite without the three-dimensional stacking of layers – hence the similarity in name.

Graphene has an extremely high electrical conductivity, allowing electrons to fly though it almost like photons (particles of light) through a vacuum. Among other uses, graphene may form the basis of a new generation of smaller, faster, cheaper, and more durable computer chips.

Carbon is the basis of all life on Earth since it forms the backbone of DNA and proteins. The average adult human body contains about 16 kg of carbon in one form or another. Carbon is taken in by plants as carbon dioxide.

Carbon fixation is the conversion of carbon dioxide into organic compounds during photosynthesis. It represents the first stage of the dark reactions of photosynthesis, in which carbon dioxide from the air is combined with ribulous 1,5-biphosphate. For more details, see Calvin cycle.

An asymmetric carbon atom is a carbon atom in a molecule of an organic compound that is attached to four different atoms or groups of atoms. The result of this asymmetry is to allow two spatially distinct but chemically identical arrangements of atoms which are mirror images of each other and known as enantiomers.

There are separate entries for carbon monoxide, carbon dioxide, and cyanide.

Carbides are binary compounds of carbon with a metal, prepared by heating the metal or its oxide with carbon. Ionic carbides are mainly acetylides (C22-) which react with water to give acetylene, or methanides (C4-) which give methane. There are also metallic interstitial carbides, and the covalent boron carbide (B4C) and silicon carbide.

Carbon disulfide (CS2) is a colorless liquid with a nauseous odor due to impurities; it is highly toxic and flammable. Carbon disulfide is used as a solvent and in the manufacture of rayon and cellophane. Melting point -111°C, boiling point 46°C, specific gravity 1.261 (at 22°C).

Carbon tetrachloride (CCl4) is a colorless liquid, nonflammable but toxic, made by chlorinating carbon disulfide. It is used as a fire extinguisher, a solvent (especially for dry-cleaning), and in the manufacture of Freon. Melting point -23°C, boiling point 77°C.

Carbon-14 (14C), also known as radiocarbon, is a radioactive isotope of carbon with a half-life of 5,730 years. This period of time makes carbon-14 suitable for determining the age of formerly living things as old as 75,000 years through a process known as radiocarbon dating. The principle behind this form of dating is as follows.

Carbon is manufactured inside the cores of evolved stars by a process that involves either a remarkable coincidence or a piece of cosmic tuning. In this process, two helium nuclei come together to make a nucleus of beryllium, which then has to capture a further helium nucleus to complete the synthesis of carbon. However, when the astrophysicist Fred Hoyle first looked closely at this reaction in the 1950s he realized there was a problem. According to what was then known, the capture of a helium nucleus by a beryllium nucleus was far too improbable to account for the observed cosmic abundance of carbon. He reasoned that the only way enough carbon could be made was if there existed a very specific match of nuclear energy levels, or resonance, between helium, beryllium, and carbon under precisely the conditions thought to prevail in the cores of stars at this stage in their evolution. Experiments promptly confirmed Hoyle's deduction – there was indeed a previously unsuspected resonance, very close to the energy value he gave. Crucially, for carbon-based life-forms, there is not a similar resonance at the same energy between carbon, helium, and oxygen. If there were, a large part of the carbon inside stars would quickly be changed into oxygen, and life as we know it would be impossible. These happy coincidences are cited by those who argue in favor of the anthropic principle, although Hoyle himself has put forward a more extreme interpretation:

If you wanted to produce carbon and oxygen in roughly equal quantities by stellar nucleosynthesis, these are the two basic levels you would have to fix, and your fixing would have to be just about where these levels are actually found to be... A commonsense interpretation of the facts suggests that a superintellect has monkeyed with physics ... and that there are no blind forces worth speaking about in nature.