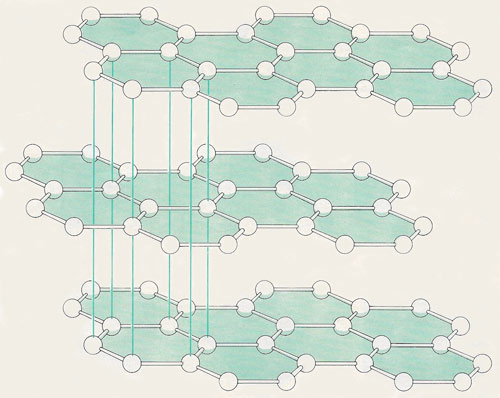 Graphite, which is identical in composition with diamond (both materials consist entirely of carbon), has a different crystal structure. In graphite the atoms are bonded strongly to one another in hexagons arrayed in planes; within these planes, in fact, graphite is harder than diamond. The planes are only loosely held together, however, so that the material in gross form is weak. Graphite is the raw material for the manufacture of diamonds, and an analogous form of boron nitride is employed in making cubic boron nitride.

Graphite, also known as plumbago or black lead, is an allotrope (see allotropy), or particular crystalline form, of carbon. Graphite is found naturally in gneiss and schist, and synthesized from coke.

The arrangement of carbon atoms in graphite is considerably different from that in diamond. In graphite, each carbon atom is covalently bonded to three other carbon atoms. All the bond angles are 120°, which is what would be expected if only three bonding electron pairs surrounded the carbon atoms. However, a check on the number of electrons reveals that there is one electron per atom left over. These electrons are delocalized and explain the electrical conductivity of graphite. Although graphite is composed of giant molecules, its atoms are arranged in layers that can slide past one another. Weak Van der Waals forces hold the layers together.

The internal structure of graphite accounts for its:

· extremely high melting point, since many very strong covalent bonds have to be broken to allow the carbon atoms to move freely;
· electrical conductivity, since the delocalized electrons are free to move when subjected to a potential difference;
· brittleness, since it is easy to split one layer from another as only the weak van der Waals forces need to be broken.

Graphite is used to make electrodes (particularly for high-temperature work), electrical contacts and brushes for electric motors. It is also used in lubricants (see lubrication) and pencil leads, and as a moderator in nuclear reactors. Composite materials that contain graphite are used to make rackets, fishing rods, and golf clubs. Graphite is a major component of cosmic dust.

These are compounds formed by penetration of reactants between the layers of graphite. Graphite oxide, approximately C2O (graphite plus HNO3 or KMnO4) and graphite fluoride (graphite plus F2) are non-conducting because of break-up of the aromatic systems of the sheets (graphite fluoride is an efficient lubricant, and is also used with lithium in batteries). In the conducting intercalation compounds various species are inserted between the sheets. The reactivity of the intercalated compound is profoundly modified, e.g., hydrolysis of fluorides is reduced.