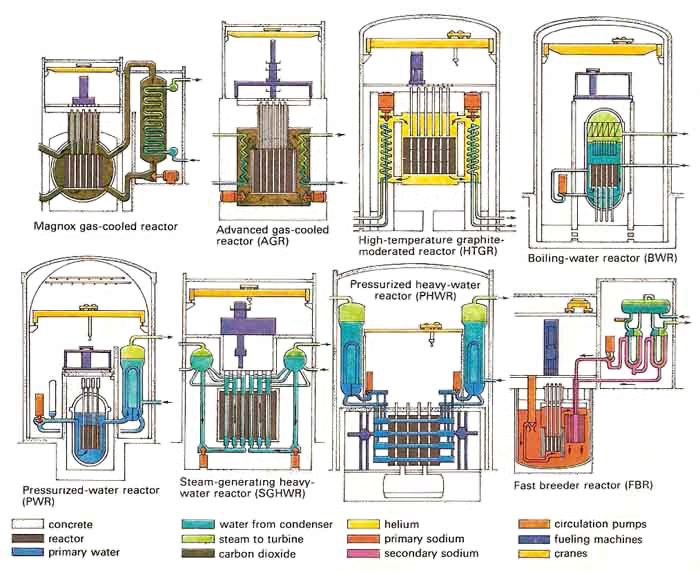 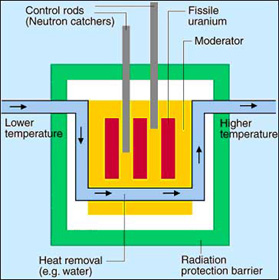 A nuclear reactor is an assembly in which a nuclear fission in the form of a chain reaction is maintained and controlled for the production of nuclear energy, radioactive isotopes, or artificial elements. The nuclear fuel used in a reactor consists of fissile material (e.g. uranium-235) which undergoes fission as a consequence of which two nuclides of approximately equal mass are produced together with between two or three neutrons and a considerable quantity of energy. These neutrons cause further fissions so that a chain reaction develops. In order that the reaction should not get out of control, its progress is regulated by neutron absorbers in control rods, only sufficient free neutrons being allowed to exist in the reactor to maintain the reaction at a constant level. The fissile material is usually mixed with a moderator which slows down, or thermalizes, the fast neutrons emitted during fission, so that they are more likely to cause further fissions of the fissile material than they are to be captured by the uranium-238 isotope (Fig 1).

In the future, nuclear reactors known as fusion reactors may harness the much larger amounts of energy available from nuclear fusion.

Nuclear fuel is fissionable material of reasonably long life, used or usable in producing energy in a nuclear reactor. Nuclear fuel consists of various chemical and physical forms of uranium and plutonium. Fluid fuels are required in homogeneous reactors; heterogeneous reactors use various forms of fuels – pure metals or alloys, as well as oxides or carbides. The fuel must have a high thermal conductivity, be resistant to radiation damage, and be easy to fabricate.

In accordance with the definition of the Atomic Energy Act, nuclear fuel consists of special fissile substances in the form of

Enrichment is the separation of the fissionable isotope of uranium, uranium-235, from the more abundant uranium-238 isotope. Gaseous uranium (VI) fluoride undergoes diffusion separation using cascades of barriers with microscopically small pores. The difference in mass between the two isotopes is minimal, but sufficient so that the heavier, slower-moving uranium-238 molecules are concentrated on one side. High-speed centrifugal-force separation methods are also used.


Components of a reactor

A control rod is part of the control system of a reactor which directly affects the rate of the reaction taking place in the reactor. A control rod is usually a rod or tube made of steel or aluminum containing boron, cadmium, or some other strong absorber of neutrons. It can be moved up or down on its axis.

A fuel rod is a long, slender tube in which nuclear fuel (fissionable material), such as uranium-235, surrounded by cladding material, such as zirconium, is inserted into a reactor. Fuel rods are assembled into bundles called fuel elements or fuel assemblies, which are loaded individually into the reactor core.

The rods must be surrounded by coolant, otherwise temperatures can rise to levels hot enough to melt metallic components over a prolonged period. This opens the possibility of a serious meltdown, in which molten, highly radioactive material from the reactor core falls through the floor of the containment vessel and into the ground below.

A moderator is a substance used in nuclear reactors to reduce the speed of fast neutrons produced by nuclear fission. These substances consist of atoms of light elements, such as deuterium in heavy water, graphite, and beryllium, to which neutrons are able to impart some of their energy on collision, without being captured. Neutrons that have been slowed down in this way are much more likely to cause new fissions of uranium-235 than they are to be captured by uranium-238.

A boiling water reactor is a nuclear reactor in which water is used as a coolant and moderator. Steam is thus produced in the reactor under pressure, and can be used to drive a turbine.

In a typical commercial boiling water reactor (Fig 3): 1. The reactor core creates heat. 2. A steam-water mixture is produced when very pure water (reactor coolant) moves upward through the core absorbing heat. 3. The steam-water mixture leaves the top of the core and enters the two stages of moisture separation where water droplets are removed before the steam is allowed to enter the steam line. 4. The steam line directs the steam to the main turbine causing it to turn the turbine generator, which produces electricity. The unused steam is exhausted to the condenser where it is condensed into water. The resulting water is pumped out of the condenser with a series of pumps, reheated, and pumped back to the reactor vessel. The reactor's core contains fuel assemblies which are cooled by water, which is force-circulated by electrically powered pumps. Emergency cooling water is supplied by other pumps which can be powered by on-site diesel generators. Other safety systems, such as the containment cooling system, also need electric power.

A breeder reactor is a nuclear reactor that produces more fissile material than it consumes. In a breeder reactor, surplus high-energy neutrons transmute a "breeding blanket" of non-fissile uranium-238 into fissile plutonium-239.