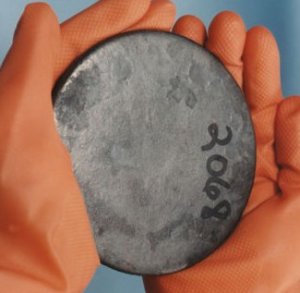 A billet of highly enriched uranium recovered from scrap processed at the Y-12 Facility in Oak Ridge, TN. Credit: US Dept of Energy.

Uranium (U) is a heavy, soft, silvery-white, metallic element, radioactive, easily oxidized, and having 14 known isotopes of which 238U is the most abundant in nature. It has the highest atomic number (92) of any naturally occurring metal. Uranium is in the actinide series. It occurs in several ores, including pitchblende (uraninite), carnotite, autunite, and torbernite from which it is extracted and processed for use in research and nuclear fuels. Uranium was discovered in 1789 by Martin Kaproth.

The decay of uranium yields a series (see radioactive series) of radioactive products, including radium and radon. Exposure to the radiation emitted by uranium can cause tissue damage or cancer. Uranium is also chemically poisonous and can cause damage to the urinary system.

One of a series of compounds of which UO2, U4O9, U3O8, and UO3 are the most common, and of which U3O8 is the most stable. The latter is green, brown, or black with an orthorhombic crystalline structure.