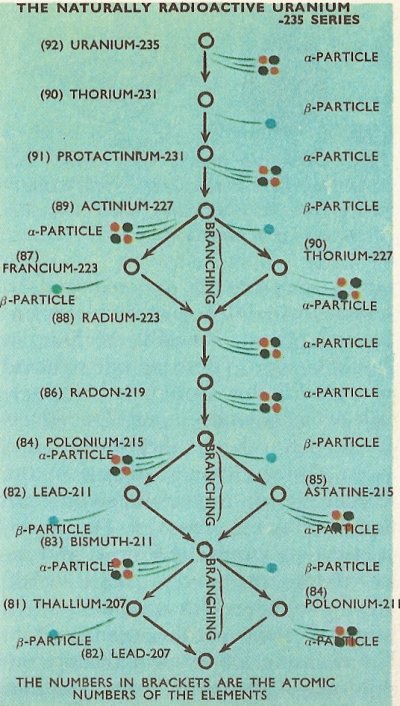 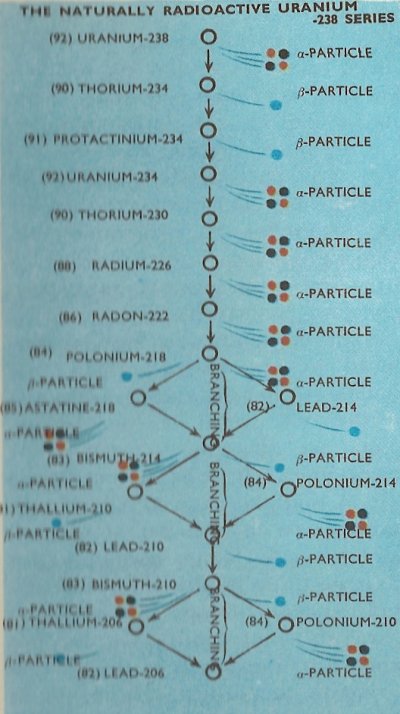 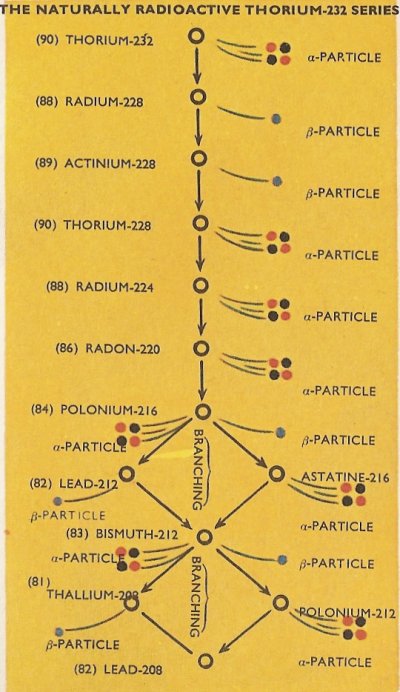 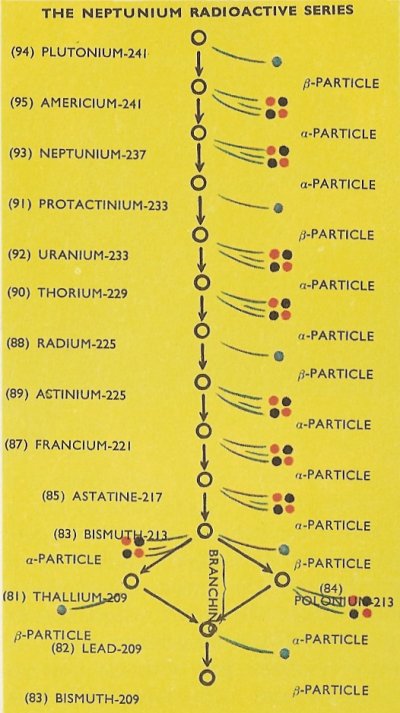 The element uranium is the heaviest atom found in nature, and is the only element with all its natural isotopes radioactive. Since an isotope differs from other isotopes of the same element in having a different relative atomic mass (r.a.m.), or atomic weight, it may be defined by the name of the element to which it belongs and the r.a.m. of the isotope. Thus uranium-238, which is the most common uranium isotope, has 92 protons (the atomic number of uranium is 92) and 146 neutrons in each atomic nucleus and therefore has a r.a.m. of 238. Uranium-235, the next most common uranium isotope, has 3 neutrons less in each nucleus.

These are the two most common uranium isotopes. They are both unstable and therefore decay radioactively into other elements by emitting charged particles from the nuclei of their atoms. Instead of decaying into stable atoms, they decay into atoms which are themselves radioactive. These then decay into a different atom and the process is repeated until a stable atom is reached. A system where atoms decay through a series of elements in this way is called a radioactive series.

There are three entirely separate radioactive series found in nature, the longest of which begins with the decay of uranium-238 and is known as the naturally radioactive uranium-238 series.

The newly-created atom then emits a particle to become an atom of a different element which then itself decays into yet another different atom.

The complete details of the three naturally occurring series are as in the diagrams, with the branchings which occur in the series shown.

It will be noticed that all of the natural series terminate with isotopes of lead, i.e., lead-206, lead-207, and lead-208. It happens that all of these are stable isotopes of the element and no further radioactive emission therefore takes place.

The times taken (as measured by the half-life) for the various radionuclides in the radioactive series to decay differs widely. For example the time taken for half an amount of uranium-238 to decay to thorium-234, which is the first step in the uranium-238 series, is 4.5 × 109 (4,500 million) years. By contrast, the half-life of thorium-234 is only 24.5 days, and the half-life of the next member in the series, protactinium-234, a mere 1.14 min.

As with the naturally radioactive series, a quantity of any isotope in the series will eventually decay to become a similar quantity of the stable isotope – in this case bismuth-209.