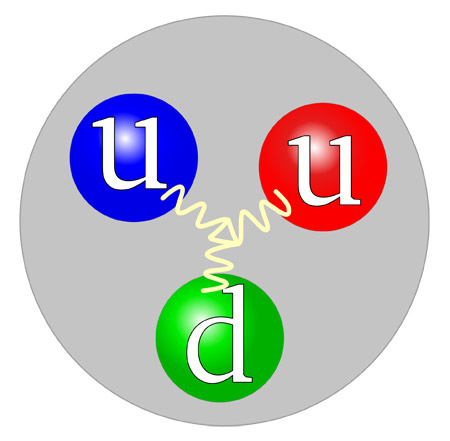 Inside a proton are two up-quarks and one down-quark.

A proton is a positively charged subatomic particle found, together with neutrons, in the nuclei of atoms; the name comes from the Greek protos meaning "first" and was coined by Ernest Rutherford in 1920. The rest mass of the proton is 938.257 MeV – 1836.12 times the mass of the electron. The number of protons determines the chemical element; for example, all atoms with one proton are hydrogen, all atoms with two protons are helium, and so on.

The proton belongs to the hadron family and consists of three quarks (two up-quarks and one down-quark). It is the least-massive baryon and, as a result, is the particle into which all other baryons will eventually decay. Until recently the proton was believed to be absolutely stable; however, most modern theories predict that it will decay with an extremely long half-life (much longer than the present age of the universe).

The internal pressure of a proton was first accurately measured in 2018 and found to be about a million trillion trillion times Earth's atmospheric pressure – higher even than the pressure inside a neutron star.1