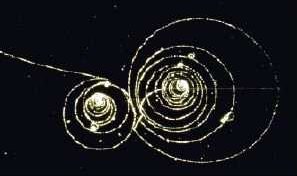 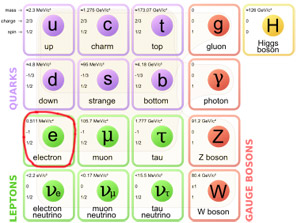 Fig 2. The Standard Model with the electron indicated. 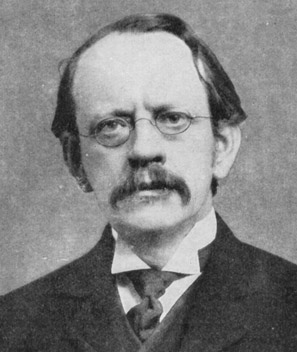 The electron is a negatively-charged subatomic particle with a mass equal to 1/1837 that of a proton or 9.1091 × 10-31 kg and a charge of 1.6021 × 10-19 coulombs. Electrons belong to the family of lightweight fermions known as leptons. Like all other leptons, the electron has no known internal structure. It behaves as if it has zero radius. The electron is a member of the scheme of fundamental particles known as the Standard Model (Fig 2). The antiparticle of the electron is the positron. Fast moving streams of electrons emitted during radioactive decay (see radioactivity) are known as beta particles.

Electrons occur in the outer parts of atoms, in orbitals corresponding to definite fixed energies. When an electron in an atom jumps from one particular orbital to another it gives rise to the emission or absorption of electromagnetic radiation at a specific characteristic wavelength. All chemical properties of atoms and molecules are determined by the electromagnetic interactions of electrons with each other and with the atomic nuclei.


Discovery of the electron

The name "electron" was first suggested by G. Johnstone Stoney in 1891 for the natural unit of electricity. The particle that plays this role was discovered by Joseph John Thomson in 1897 (Fig 3). "Electron", "electricity", etc., derive from the term "electrica", coined by William Gilbert in 1600 to denote substances such as amber (electrum in Greek) that attract light objects when rubbed.

The announcement of the discovery of the electron was made by J. J. Thomson in 1897, at the Royal Institution Friday Evening Discourse. Thomson told his audience that earlier in the year, he had made a surprising discovery. He had found a particle of matter a thousand times smaller than the atom. He called it a corpuscle, meaning "small body." Although Thomson was director of the Cavendish Laboratory at the University of Cambridge, and one of the most respected scientists in Britain, the scientists present found the news hard to believe because, at the time, it was thought that the atom was the smallest component of matter and that it was indivisible.


Wavelength of the electron

Until 1923 the electron was considered to be a particle only, but in that year Louis de Broglie put forward a new theory of the electron (see de Broglie and matter waves). De Broglie proposed that a moving particle, whatever its nature, has wave properties associated with it. The wavelength λ associated with any moving particle of mass m and velocity v, he proposed, is given by λ = h/mv where h is Planck's constant. The first experimental support for de Broglie's ideas came from the Davisson and Germer experiment.

Delta rays are short electron tracks surrounding the track left by a fast-moving, charged particle in cloud chambers, bubble chambers, or other particle detectors. The primary particle dislodges electrons from the atoms of the medium concerned, and the faster of these leave short tracks of their own before being brought to rest.

Electron emission is the liberation of electrons from the surface of a substance. It can occur as a result of thermionic emission, light (photoelectric effect), high electric field (field emission), or bombardment by ions or other electrons (secondary emission). It may also occur due to radioactive decay. In all cases, the electrons must acquire energy from the outside source in excess of the work function (the minimum energy needed to escape from the surface) of the substance. Most electron tubes and cathode-ray tubes depend on thermionic emission, whereas photoelectric cells rely on photoelectric emission. Field emission is important in the field-emission microscope and secondary emission is the principle used by electron multipliers and storage tubes.

charge on the electron