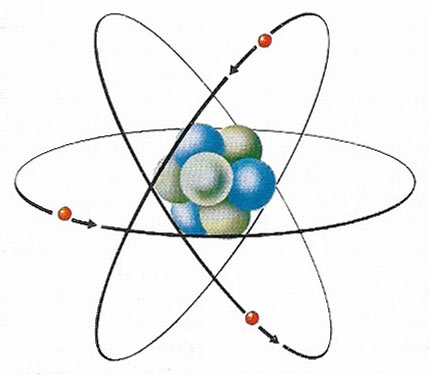 The electron's charge is the basic unit of electricity; the electron is a fundamental particle found in every atom. In this simple model of an atom of the metallic element lithium, three electrons (red) can be seen circling the central nucleus. Protons (blue) and neutrons (gray) make up the nucleus. Each electron carries a negative electric charge and each proton carries a positive one, so that the three electron charges are exactly balanced by the three proton charges, making the whole atom electrically neutral. In a conductor, which includes all metals, an external electromotive force (voltage) causes electrons to drift from atom to atom and it is this flow of electrons that constitutes an electric current. Electron movement occurs because in a conductor the outermost electron is not tightly bound to the nucleus. In a non-conductor or insulator the electrons are too tightly bound to leave the nucleus easily and so such substances do not conduct electricity. In some substances atoms can completely lose or gain one or more electrons to become permanently charged. Such charged atoms, called ions, can also act as current carriers.

Every electric charge is a multiple of a unit charge that is equal in magnitude to the irreducible charge associated with a single electron, a fact first noted and evaluated in 1909 by Robert Millikan. However, the dual nature of the electric charge had been known from ancient Greek times and is best demonstrated, as then, by electrostatic effects. If a glass rod is rubbed with silk the two objects attract each other, while two glass rods rubbed in the same way repel each other. Each rod acquires a net positive charge, whereas the silk collects excess electrons by the action of friction and becomes negatively charged.

It is a characteristic property of charges that they are conserved; they can neither be created from nothing nor simply disappear. For instance, when a positron with electric charge +1 (in suitable units) and an electron with electric charge -1 annihilate to give electromagnetic radiation, overall charge conservation is satisfied: Before the annihilation, the sum of the electric charges was 1 + (-1) = 0, and afterwards, when there is only uncharged electromagnetic radiation left, it is also zero.

More broadly speaking, charge is a quantity carried by a particle that determines its participation in an interaction with other particles. A particle with electric charge has electromagnetic interactions; one with strong charge (or color charge) has strong interactions, etc.