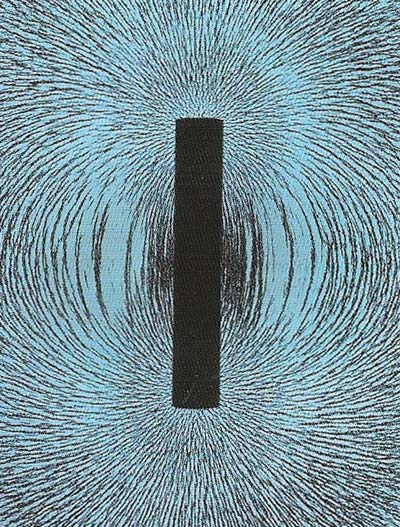 `Metal filings form a magnetic field pattern around either pole of a magnet. Magnetic fields force moving electrically charged particles in a circular or helical path.

Electromagnetism may refer to any of the following:

1. Electromagnetic theory: the science of electricity and magnetism; specifically, the study of electric and magnetic fields. The two fields are in fact different manifestations of the same physical field, and are interconverted according to the speed of the observer. The theory of electromagnetism, including light, was first developed by Michael Faraday and James Clerk Maxwell in the 19th century (see Maxwell's equations).

3. One of the four fundamental forces of nature along with gravity, the weak force, and the strong force. It is the interaction due to electric charge, which also includes magnetic effects that have to do with moving electric charges. Electromagnetism is the second strongest force after the strong force. At the quantum level it is mediated by photons, and is well described by the theory of quantum electrodynamics.

Scottish theoretical physicist James Clerk Maxwell understood electromagnetism in terms of work produced earlier in the 19th century, by Andre-Marie Ampere and Michael Faraday, on electric currents in relation to the magnetic field. In a key paper, "A Dynamical Theory of the Electromagnetic Field," published in 1865 in Philosophical Transactions of the Royal Society, Maxwell showed mathematically that electricity and magnetism are two aspects of the same phenomenon, before publishing a landmark work based on his own and others' discoveries, A Treatise on Electricity and Magnetism, in 1873. Here, he proposed that electromagnetism consisted of a spectrum, and frequency ultraviolet light down to long radio waves.

Experimental proof that Maxwell's theory was more than just a clever piece of mathematics was provided a few years after Maxwell's death by German physicist Heinrich Hertz. However, Maxwell's idea that a substance known a ether was involved in electromagnetic processes later fell out of favour as a result of Albert Einstein's special theory of relativity, which ruled out ether as a necessary prerequisite for the behavior of electromagnetic radiation.

For the next fifty years, Maxwell's electromagnetic theory dominated theoretical physics, along with Isaac Newton's mechanics, and ,any practical applications were found for both electric currents and magnets. The theory was seminal to the work of Einstein, who recognized how it had changed scientific and popular perceptions of reality itself. He commented: "Before the electromagnetic theory was put forward, people conceived of physical reality as material points. After Maxwell, they conceived reality as represented by continuous fields, not mechanically explicable."