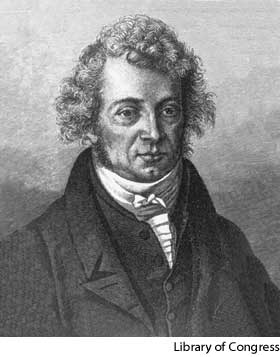 André Ampère was a French physicist, chemist, and mathematician, born at Lyons, who was one of the pioneers of electrodynamics or, as it is now more commonly known, electromagnetism. He carried our numerous experiments to study the magnetic effects of electric currents. Ampère was the first to devise techniques for detecting and measuring currents, and built an early type of galvanometer. Ampère's law – proposed by him – is a mathematical description of the magnetic force between two electric currents. His name is also commemorated in the fundamental unit of current, the ampere.

In mathematics Ampère worked on partial differential equations, and he also made significant contributions to chemistry. In 1811 he suggested that an anhydrous acid prepared two years earlier was a compound of hydrogen with an unknown element, analogous to chlorine, for which he suggested the name fluorine. He produced a classification of elements in 1816. Ampère also worked on the wave theory of light. By the early 1820's, he was working on a combined theory of electricity and magnetism, after hearing about the experiments of Hans Oersted.

The guillotining of his father in 1793 left a profound impression on young Ampère, who sought solace in the study of nature and antiquity. In 1805, after he had been engaged for four years as a lecturer at Bourg and Lyons, he was called to Paris, where he distinguished himself as an able teacher in the Polytechnic School, having already begun his career as an author by his Considérations sur la Théorie Mathématique du Jeu (1802). In 1814 he became a member of the Academy of Sciences; in 1824, professor of Experimental Physics in the Collège de France.

Ampère's views on the nature of electricity and magnetism were presented in his Recueil d'Observaytions Electro-dynamiques (1822), and this Thèorie des Phénomènes Electrodynamiques (1830). These researches prepared the way for the experiments of Michael Faraday.