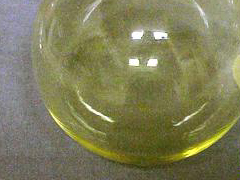 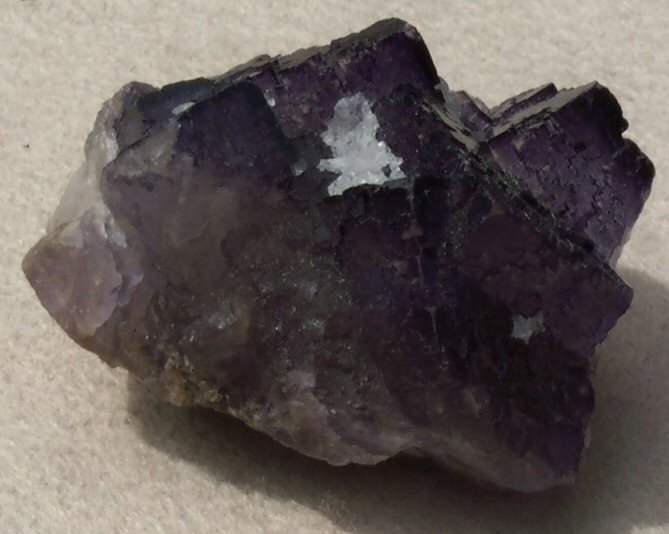 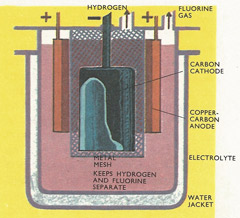 Fluorine gas can be prepared by electrolyzing a fused mixture of composition KF.2HF. A heavy current is passed between electrodes of carbon and copper impregnated with carbon. Water is circulated in the water jacket to remove the heat generated by the passage of the current.

The halogens are all members of the seventh group of the periodic table. This means that each atom has seven electrons in its outer shell. As we go down the group from fluorine to iodine, each element becomes heavier and less reactive. Fluorine and chlorine are gases at room temperature while bromine is a liquid, and iodine a solid.

Fluorine (F) is a pale yellow, highly corrosive, highly poisonous, gaseous element. It occurs naturally as fluorite, cryolite, and fluorapatite (see apatite). At -188°C it condenses into a pale yellow liquid. Fluorine is the lightest halogen and the most electronegative, oxidizing, and reactive of all the elements. Steel wool bursts into flames when exposed to it. Most nonmetal fluorides are highly reactive, but sulfur hexafluoride (used as an electrical insulator) and carbon tetrafluoride are inert.

Fluorine is used in a wide variety of industrially important compounds. It was discovered in 1529, but first isolated by Henri Mossian (1852–1907) in Paris in 1866. He added potassium hydrogen fluoride to liquid hydrogen fluoride and then passed an electric current through the solution. By carrying out the electrolysis in a U-tube made of platinum-indium alloy with electrodes of the same material, Mossian obtained fluorine gas. The fluoride solution has a very electrical resistance and a heavy current is needed to bring about electrolysis. The passage of this currents heats up the apparatus, so the cell has to be cooled.

Fluorine salts, known as fluorides, were used for centuries in welding metals and for frosting glass before the element itself was isolated. Fluorine is used in a wide variety of industrially important compounds. It is also used to make uranium hexafluoride, needed by the nuclear power industry, and sulfur hexafluoride insulating gas for high-power electricity transformers, and to treat polythene to make it impermeable to solvents.

Fluorite, also known as fluorspar, is a common mineral composed of calcium fluoride, CaF2 (see calcium). It forms cubic crystals with a wide color range. Fluorite is used as a flux in the iron and steel industries, and as a fluorine ore. Under an ultraviolet light, fluorite shows the property of fluorescence.


Fluorine and the other halogens

Fluorine is a member of the non-metallic group of elements called the halogens. Chlorine, bromine, and iodine are among the other member. There are , however, marked differences between the behavior of fluorine and its compounds, and of the other halogens and their compounds. For instance, silver fluoride is very soluble in water, but the chloride, bromide, and iodide of silver are all virtually insoluble.

Fluorine is very reactive and, even at very low temperatures, it combines explosively with hydrogen. Fluorine reacts vigorously with phosphorus and liberates chlorine from potassium chloride in a displacement reaction:

Many metals combine directly with fluorine and in 1962 it was first reported that xenon (one of the group of gases previously thought to be inert) reacts with fluorine at 400°C to form a tetrachloride, XeF4.

Hydrofluoric acid is prepared by the action of concentrated sulfuric acid on fluorspar (calcium fluoride), which is one of the principal fluorine-containing minerals. Unlike the hydrides of the other halogens, which are gases at room temperature, hydrofluoric acid is a liquid (boiling point 19.5 °C). This is due to the existence of hydrogen bonds linking the various molecules to one another. For the same reason water is a liquid (not a gas like its near neighbor, hydrogen sulfide).

Metallic fluorides, which correspond in some respects with the chlorides), are formed by the action of hydrofluoric acid on metals or their oxides. However, there is an important difference between fluorides and chlorides in that acid fluorides (e.g., potassium hydrogen fluoride, KHF2), are formed if the acid is present in excess.