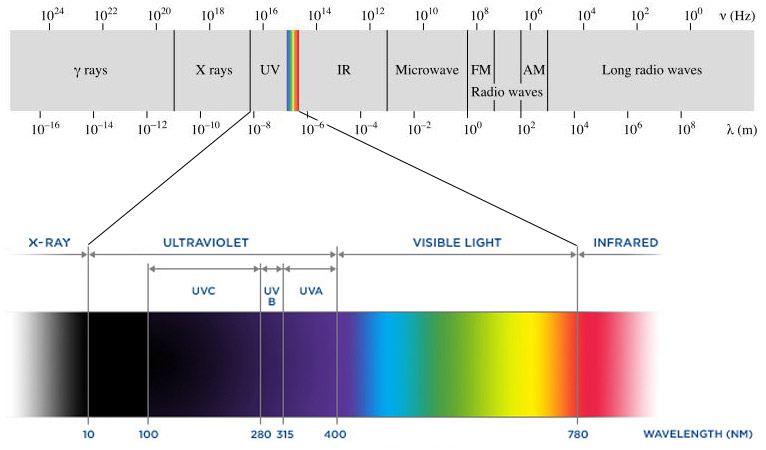 Fig 1. Ultraviolet waves span wavelengths between 10 and 400 nanometers and lie between X-rays and visible light. 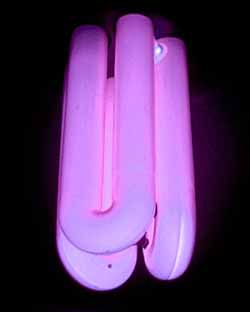 Ultraviolet (UV) light is electromagnetic radiation that has a wavelength in the range 10–400 nanometers (100 Å to 4,000 Å). It spans the range between the violet end of the visible spectrum and the X-ray region. The ultraviolet spectrum can be subdivided in a number of ways. The near ultraviolet (the long wavelength end of the range) extends from just beyond the violet end of the visible spectrum to about 300 nm (3,000 Å). The far ultraviolet stretches from 200 nm to the wavelength of Lyman-alpha at 121.6 nm (1216 Å). Beyond this, from the wavelength of Lyman-alpha to the start of the X-ray regime at about 10 nm (100 Å), lies the extreme ultraviolet. Solar UV that reaches Earth's surface is categorized as UVA, UVB, and UVC. Much ultraviolet light from the Sun, including all extreme ultraviolet. is absorbed by the ozone layer.

The draft ISO standard on determining solar irradiances (ISO-DIS-21348) identifies the ranges listed in the table below.

Ultraviolet light was discovered in 1801 by the German physicist Johann Wilhelm Ritter (1776–1810). He made the discovery while working with silver chloride, which decomposes in the presence of light, especially ultraviolet light. (Ritter also worked in electrochemistry and in 1802 made the first dry cell.)

The ultraviolet light (mainly UVA) that reaches Earth's surface causes tanning and the production of vitamin D in the skin. It can also have harmful effects, such as sunburn and skin cancer. This form of light is generated by tanning beds and booths to produce a suntan. Tanning beds are designed to emit only UVA rays; however, in practise they also emit some UVB, which is more likely to causing burning and skin cancer.

Ultraviolet light is also produced by welding torches, carbon arc lamps, and some lasers. Special precautions, such as the use of goggles, should always be taken when using such equipment.

UV light is sometimes used in phototherapy to treat skin disorders such as eczema, psoriasis, and jaundice in newborn babies.