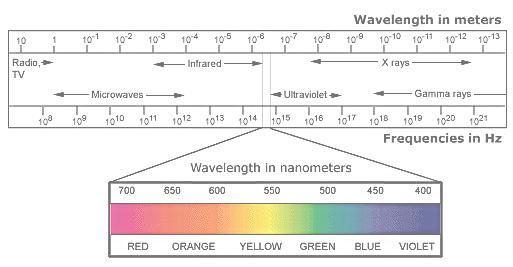 
Classically, radiant energy is considered to be a form of wave motion. In the mid-nineteenth century, James Clerk Maxwell showed that an oscillating electric charge would be surrounded by varying electric and magnetic fields. Energy would be lost from the oscillating charge in the form of transverse waves in these fields, the waves in the electric field being at right-angles to those in the magnetic field and to the direction in which the waves are traveling. Moreover, the velocity of the waves would depend only on the properties of the medium through which they passed; for propagation in a vacuum its value is a fundamental physical constant of physics – the electromagnetic constant, c.

At the beginning of the twentieth century Max Planck proposed that certain properties of radiation were best explained by regarding it as transporting energy in discrete amounts called quanta. The name 'photon' was adopted to describe the quantum of the electromagnetic field. The energy of each photon is proportional to the frequency of the associated radiation. In general, the higher the energies involved, the better the properties of the radiation are described in terms of particles rather than waves.