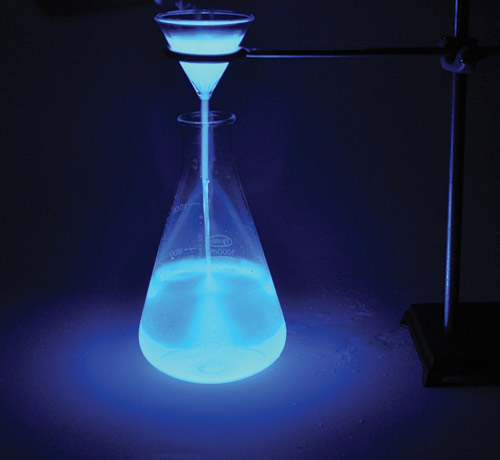 Luminescence is the non-thermal emission of electromagnetic radiation, particularly light, from a substance after it has been stimulated in some way other than by high temperatures. In this respect it differs from incandescence. Forms of luminescence include photoluminescence (including fluorescence and phosphorescence), chemiluminescence, bioluminescence, and triboluminescence.

Bioluminescence is the production of light, with very little heat, by a chemical reaction within an organism.

Chemiluminescence is luminescence caused by a chemical reaction, usually oxidation, as of phosphorus in air. The molecules are excited to a high energy level, and emit light as they return to the ground state. This process, as we've seen, in living organisms is called bioluminescence.

Fluorescence is a form of luminescence in which a substance emits visible light almost immediately after it has been stimulated or excited by electromagnetic radiation of a different wavelength or by certain other means.

Phosphorescence is a form of luminescence in which a substance emits visible light some time after it has been stimulated or excited by electromagnetic radiation of a different wavelength or by certain other means not involving a rise in temperature. The light is given off within a period arbitrarily set at greater than 10 nanoseconds (10-8 s) – after the stimulation ends; in this respect, the phenomenon differs from fluorescence. The slower time scales of the re-emission of the radiation are associated with quantum mechanically forbidden energy state transitions. Phosphorescence is the mechanism used for "glow in the dark" materials which need to be charged up by exposure to light.

Thermoluminescence is the emission of light from a steadily heated material that has previously been exited by exposure to radiation. It is a form of luminescence and arises from electron displacements within the material's crystal lattice. A long time delay may elapse between excitation and subsequent light emission; this is utilized in thermoluminescent dating in archaeology.

Triboluminescence is a form of luminescence caused by adding mechanical energy to certain substances by rubbing, scratching, striking, or crushing.