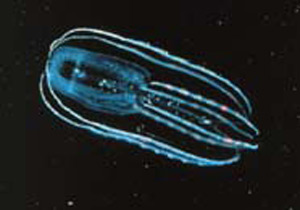 A bioluminescent comb jelly of the phylum Ctenophora. Image: NOAA. 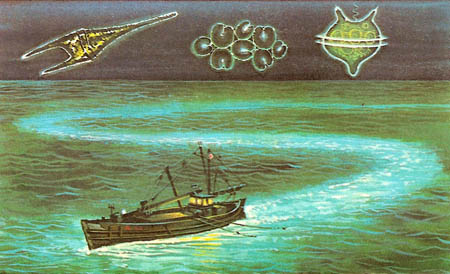 The wake of a fishing vessel is visible as a ribbon of light produced by millions of tiny luminous protozoans.

Bioluminescence is the production of light, with very little heat, by a chemical reaction within an organism. The process occurs in many bacteria and protists, as well as some marine animals, fireflies, and fungi. The effect is an example of chemiluminescence. In some cases its utility to the organism is not apparent, though in others its use is clear. Thus, in the firefly, the abdomen of the female glows, enabling the male to find her. Similarly, luminescence enables many deep-sea fish to locate each other or to attract their prey.

The light-emitting substance (luciferin) in most species is an organic molecule that emits light when it is oxidized by molecular oxygen in the presence of an enzyme (luciferase). Each species has different forms of lucerfin and luciferase.

Man has learned to use the light-producing ability of other organisms in several ways. For example, during World War II the Japanese use dried preparations of a marine crustacean, Cypridina. On adding water to the dried material a dim glow was produced – sufficient light for maps and compasses to be read without giving away their position. Biochemists are able to measure the intensity of light produced by certain organisms. This is a measure of the rate at which the chemical reactions involved proceed.

The significance that bioluminescence has in the lives of many organisms is not fully understood. Toadstools, such as Mycena and "Jack-o-lantern" (Clitocybe) and many molds and bacteria are luminous, but what possible function can this have in a plant? "Jack-o-lantern" is poisonous, as are many brightly-colored non-luminous fungi. Possibly the luminescence has a protective value therefore, but many luminous plants are harmless.

Several species of protozoan are luminous. They are so numerous that, when disturbed, they light up the surface of the sea. Examples are Peridinium, Noctiluca, and Gonyaulax. Noctiluca often occurs near the shore in the surface of the sea. At night, as the breakers crash on to the beach, they appear to burst into flame. In a similar way the wake of a ship may be marked out as a ribbon of sparkling light.

Many kinds of coelenterates are luminous, as are the related comb jellies (Ctenophora), such as Pleurobrachia. The medusa Pelagia is well-known for its light-producing faculty. The entire outer surface of the bell becomes luminous on being disturbed, and a mass of luminous slime is produced when it is handled roughly.

Several bristle worms are luminous. One species, Odontosyllis, swarms prior to swarming. Males and females are attracted to each other by the exchange of light signals. They begin to swarm at the surface between two and three days after a full moon. The males are attracted to the surface by the strong and continuous greenish glow produced along the entire length of the female worms. The males emit short flashes of light. Sperm and eggs are discharged into the water amid this illuminated confusion.

The bristle worm Tomopteris has definite light-producing organs (photophores), one on each side of its leaf-like swimming paddles. In basic structure they are similar to the more elaborate photophores of higher animals.

Many shrimps and prawns have lantern-like photophores. A few can also release clouds of luminous slime from special glands. The lighted "smoke-screen" no doubt baffles pursuers in much the same way as the wriggling cast-off tail of a lizard. The photophores of shrimps and prawns occur on some of the legs and on parts of the body. Perhaps the pattern they make serves for recognition purposes.

Photophores are best developed in squid and their relatives, and in fish. In squid they are most commonly present on the under surface of the body, but also on the arms.

Each photophore consists of a number of light-producing cells, a reflector, a lens, and an on-off "switch." The light emitted is of varying color. It is possible that the differing arrangements of the photophores distinguish between the sexes or indicate the state of maturity that the squid have reached.

Heteroteuthis, a small deep-water squid living in the Mediterranean, instead of shooting out a cloud of ink, as do most other squid when escaping from enemies, produces a luminous cloud round itself.

Most of the luminous fish live in moderately deep water, a few in the abyss. The photophores are usually arranged in rows. A deep sea angler fish has on top of its head a long lure, the luminous tip of which hangs just above its mouth. Prey area attracted by the light and so fall victim to the fish. Certain East Indian fish have special organs beneath the eye. They are pockets containing bacteria. Bacteria release their light continuously, but the fish have a shutter mechanism whereby they can either conceal the light or display it.

Famous luminous insects are the glow-worms and fireflies. In New Zealand the larvae of a certain fly live on the ceilings of caves. Each glows and spins a web of luminous silk with which to trap food. The ceilings glow as though covered in thousands of tiny chandeliers. The European glow-worm is a wingless female beetle (not a worm) that lives in grass and in hedgerows. Pale green light emitted by photophores on the lower hind part of the abdomen attracts males flying nearby.

Pairing in the flies depends on the exchange of light signals. The pattern of the signals differs from one species to another. In one species the male emits short flashes at regular intervals. After a pause of about two seconds the female replies with a short flash. The make then flashes again, followed after the pause by a response from the female. There are several such exchanges of signals prior to pairing.

The light produced by living organisms is often referred to as cold light, for very little heat is given off during its production. Measurements indicate that nearly 100% of the energy produced is released as light.

The chemical reaction involved is a modification or side branch of the reactions that proceed in every living cell. It is essentially the same in all cases so far investigated and, like other biological reactions, it is promoted by an enzyme. The enzyme is called luciferase. In the presence of oxygen and ATP (adenosine triphosphate), luciferase promotes the oxidation of luciferin. This causes the production of light. For each molecule of luciferin that is oxidized, one quantum (packet) of light energy is released. The chemical structure of luciferin has been established and it has been synthesized. The luciferase molecule is a protein made up of about 1,000 amino acid molecules.