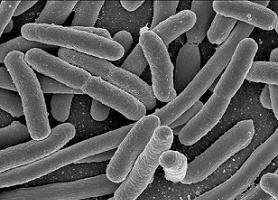 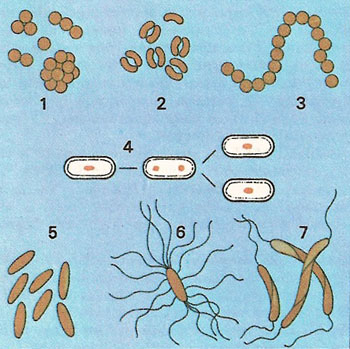 Structure of a bacterium.

Bacteria are a large group of unicellular and simple multicellular organisms, lacking chlorophyll, which multiply through cell fission.

Until recently, all bacteria were grouped into a single kingdom of prokaryotes, Monera, which included both eubacteria and archaebacteria. Eubacteria are distinguished by having very strong cell walls containing peptidoglycan. Archaebacteria lack peptidoglycan in their cell walls and their genes are more similar to those found in eukaryotes than are those of eubacteria. The differences are so great that most biologists now agree that archaebacteria and eubacteria should be assigned to separate kingdoms. In the new taxonomic scheme, eubacteria, including cyanobacteria, make up the Kingdom Monera, while archaebacteria, redesignated archaea, comprise the Kingdom Archaea (see life, classification).

Bacteriology is the science that deals with bacteria, their characteristics and their activities as related to medicine, industry, and agriculture. Bacteria were discovered in 1676 by Anton von Leeuwenhoek. Modern techniques of study originate from about 1870 with the use of stains and the discovery of culture methods using plates of nutrient agar media. Much pioneering work was done by Louis Pasteur, Robert Koch, and Ferdinand Cohn.

Ferdinand Cohn was a German botanist renowned as one of the founders of bacteriology. He showed that bacteria could be classified in fixed species and discovered that some of these formed endospores (see bacterial spores) which could survive adverse physical conditions. He was also the first to recognize the value of Robert Koch's work on the anthrax bacillus. Cohn began to study bacteria in 1868 and edited Contributions to the Biology of Plants in 1870.

The shape of bacterial cells is of fundamental importance in the classification and identification of bacteria. The majority of bacterial cells come in three basic shapes: round, rod shaped, or spiral. However, they display a remarkable variety of forms when viewed microscopically:

The vast majority of bacteria have a cell wall containing a special polymer called peptidoglycan. The cell wall lies outside the cell membrane, and the rigid peptidoglycan is important in defining the shape of the cell, and giving the cell mechanical strength.

The bacterial cell wall is a unique biopolymer in that it contains both D- and L-amino acids. Its basic structure is a carbohydrate backbone of alternating units of N-acetyl glucosamine and N-acetyl muramic acid. The NAM residues are cross-linked with oligopeptides. The terminal peptide is D-alanine although other amino acids are present as D-isomers. This is the only biological molecule that contains D-amino acids and it is the target of numerous antibacterial antibiotics.

Bacteria may be conveniently divided into two further groups, depending upon their ability to retain a crystal violet-iodine dye complex when cells are treated with acetone or alcohol. This reaction is referred to as the Gram reaction: named after Christian Gram, who developed the staining protocol in 1884. It may seem an arbitrary basis on which to build one's classification system. This reaction, however, reveals fundamental differences in the structure of bacteria. Electron microscopy shows that Gram-negative and Gram-positive bacteria have fundamentally different structures, related to the composition of the cell wall, amongst other things.

Cells with many layers of peptidoglycan can retain a crystal violet-iodine complex when treated with acetone. These are called Gram-positive bacteria and appear blue-black or purple when stained using Gram's method. Gram-negative bacteria have only one or two layers of peptidoglycan and cannot retain the crystal violet-iodine complex. These need counterstaining with another dye to be seen using Gram's method. A red dye such as dilute carbol fuchsin is often used.

The bacterial chromosomal DNA is located in a region of the cell known as the nucleoid. Bacteria, being prokaryotes, do not have a true, membrane-bound nucleus; they do, however, carry a single chromosome that is circular in structure.

Additional genetic information may be carried on plasmids. These are circles of DNA that lie within the bacterial cytoplasm and replicate independently of the chromosome. Plasmids carry genes that are typically not essential for survival, but that can confer selective advantages in special circumstances. Not all bacterial cells carry plasmids, but some can carry several plasmids in a single cell. R-factors are plasmids that carry genes that confer antibiotic resistance on the cell.

The cytoplasm of bacteria contains polysomes – a range of ribosomes actively translating messenger RNA into proteins. Some bacteria also have inclusion bodies within the cytoplasm. These are often energy storage resources. Some inclusion bodies are referred to as metachromatic granules since they change the color of dyes used to stain cells. Inclusion bodies found within Corynebacterium diphtheriae, the cause of diphtheria, are an important example of metachromatic granules.

Flagella are responsible for the motility of pathogenic bacteria and can play a role in the production of disease. Gram-negative pathogenic bacteria may be covered in fine hairs called fimbriae (singular: fimbria) these help to stick to body surfaces. Pili can attach two bacterial cells together: sex pili are necessary for the transfer of certain plasmids between bacteria.

Bacterial cells may carry a single flagellum, and are thus described as monotrichous. If the single flagellum is at one end of a rod-shaped cell it is known as a polar flagellum. If the bacterium carries a single tuft of flagella, it is said to be lophotrichous (lophos – Greek for a crest). When the tuft appears at both ends of the cell, the bacterium is amphitrichous (amphi – Greek for 'at each end'). Bacteria that are covered all over in flagella are said to be peritrichous (peri – around).

Bacterial spores represent a highly resistant, resting phase displayed by some types of bacteria. Endospores (or simply spores) form within (hence endo-) special vegetative cells called sporangia in response to adverse changes in the environment. The original cell replicates its genetic material, and one copy of this becomes surrounded by a tough coating. The outer cell then disintegrates, releasing the spore which is now well protected against a variety of trauma, including extremes of heat and cold, radiation, and an absence of nutrients, water, or air.