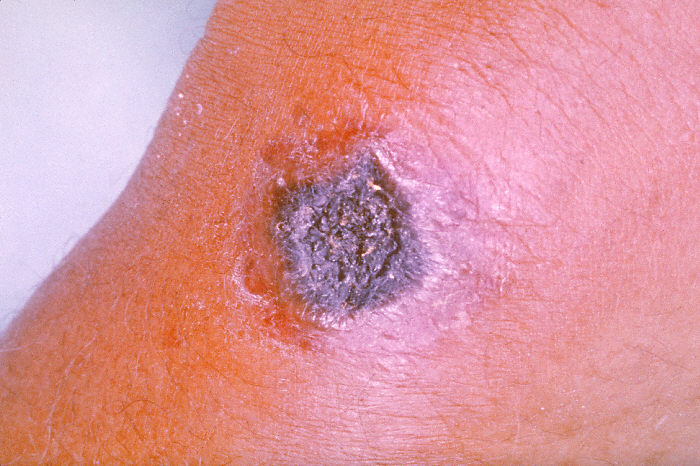 Anthrax lesion on the skin of the forearm caused by the bacterium Bacillus anthracis. Here the disease has manifested itself as a cutaneous ulceration, which has begun to turn black, hence the origin of the name "Anthrax", after the Greek name for coal. Image source: Centers for Disease Control and Prevention.

Anthrax is a rare, contagious bacterial disease, mainly of livestock, causing characteristic skin pustules and lung disease; it may progress to sepsis and death. It is caused by infection with the bacterium Bacillus anthracis, which lives in soil. Anthrax spores, which can survive for years, may be picked up from infected animals (such as sheep and cattle), or bone meal. Treatment is with penicillin or other antibiotics, and people at risk are vaccinated; the isolation of animal cases and disinfection of spore-bearing material is essential.

Anthrax was the first disease in which bacteria were shown (by Koch) to be causative and it had one of the earliest effective vaccines, developed by Pasteur. The earliest reports of the disease date back to about the 1st century BC. The name comes from the Greek name for coal ("anthracite" has the same root).

Cutaneous anthrax is the most common form of the disease. People with cuts or open sores can get cutaneous anthrax if they come in direct contact with the bacteria or its spores, usually through contaminated animal products. The skin will redden and swell, much like an insect bite, and then develop a painless blackened lesion or ulcer that may form a brown or black scab, which is actually dead tissue. Cutaneous anthrax responds well to antibiotics but may spread throughout the body if untreated. People who work with certain animals or animal carcasses are at risk of getting this form of the disease. Cutaneous anthrax is rare in the United States. According to the Centers for Disease Control and Prevention (CDC), the United States sees only one to two cases per year.

When a person inhales the spores of B. anthracis, they germinate and the bacteria infect the lungs, spreading to the lymph nodes in the chest. As the bacteria grow, they produce two kinds of deadly toxins.

Symptoms usually appear 1 to 7 days after exposure, but they may first appear more than a month later. Fever, nausea, vomiting, aches, and fatigue are among the early symptoms of inhalational anthrax; it progresses to labored breathing, shock, and often death.

Historically, the mortality rate for naturally occurring inhalational anthrax has been 75%, even with appropriate treatment. But inhalational anthrax is rare. In the 2001 anthrax attacks, 11 people were infected with inhalational anthrax and 6 survived. Prior to 2001, the last known U.S. case was in 1976, when a California craftsman died after getting the infection from imported yarn contaminated with anthrax spores.

People can get gastrointestinal anthrax from eating meat contaminated with anthrax bacteria or their spores. Symptoms are stomach pain, loss of appetite, diarrhea, and fever. Antibiotic treatment can cure this form of anthrax, but left untreated, it may kill half of those who get it.

Gastrointestinal anthrax occurs naturally in warm and tropical regions of Asia, Africa, and the Middle East. There have been no confirmed cases of gastrointestinal anthrax in the United States, although a Minnesota farm family may have experienced symptoms of the disease in 2000 after eating meat from a steer that had anthrax.

Bacillus anthracis is a bacterium that lives in soil and has developed a survival tactic that allows it to endure for decades under the harshest conditions. An anthrax bacterial cell can transform itself into a spore, a very hardy resting phase which can withstand extreme heat, cold, and drought, without nutrients or air. When environmental conditions are favorable, the spores will germinate into thriving colonies of bacteria. For example, a grazing animal may ingest spores that begin to grow, spread, and eventually kill the animal. The bacteria will form spores in the carcass and then return to the soil to infect other animals in the future.

While its spore form allows the bacteria to survive in any environment, the ability to produce toxins is what makes the bacteria such a potent killer. Together, the hardiness and toxicity of B. anthracis make it a formidable bioterror agent. Its toxin is made of three proteins: protective antigen, edema factor, and lethal factor.

In the fall of 2001, lethal anthrax bacteria were spread deliberately through the US mail. Twenty-two people became ill, and five died. The perpetrator has not been caught.

Even before this bioterror attack, public health officials were concerned about the potential for such an event. In 1999, the Centers for Disease Control and Prevention (CDC) created lists of high-priority biological agents that terrorists could use to harm civilians. An expert panel of doctors and scientists classified Bacillus anthracis as a Category A bioterror agent. The NIAID list of Category A organisms includes those that pose the greatest threats to national security due to their ease of transmission, high rate of death or serious illness, potential for causing public panic, and the special public health measures an epidemic would require.

Since the creation of the CDC lists, public health officials and researchers have worked to plan and prepare for a possible bioterror attack. Following the 2001 anthrax attacks, federal funding for these efforts increased significantly.

If diagnosed early, anthrax is easily treated with antibiotics. Unfortunately, infected people often confuse early symptoms with more common infections and do not seek medical help until severe symptoms appear. By that time, the destructive anthrax toxins have already risen to high levels, making treatment difficult. Antibiotics can kill the bacteria, but antibiotics have no effect on anthrax toxins.

In 1970, the Food and Drug Administration (FDA) approved an anthrax vaccine for humans, which is licensed for limited use. The vaccine is currently used to protect members of the military and individuals most at risk for occupational exposure to the bacteria, such as slaughterhouse workers, veterinarians, laboratory workers, and livestock handlers. The vaccine does not contain the whole bacterium. Rather, it is made mostly of the anthrax protective antigen protein, so people cannot get anthrax infection from the vaccine.

Health experts currently do not recommend the vaccine for general use by the public because anthrax illness is rare and the vaccine has potential adverse side effects in some individuals. Researchers have not determined the safety and efficacy of the vaccine in children, the elderly, and people with weakened immune systems. Although the vaccine trials indicate that three to four doses of anthrax vaccine can generate significant protective immunity, the recommended vaccination schedule is six doses given over an 18-mo period.

To quickly protect the public in the event of a bioterror attack, scientists are seeking to develop a new vaccine.