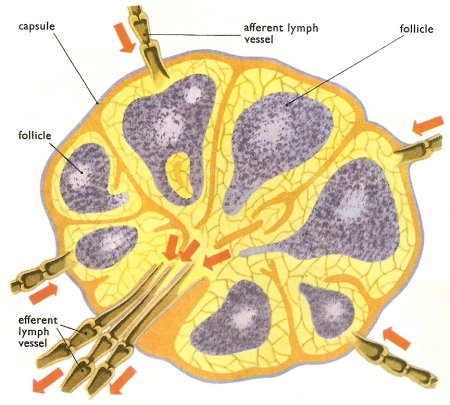 Section through a lymph node showing the arrangement of vessels.

The typical lymph node is surrounded by a fibrous envelope or capsule from which trabecu;ae extend inwards. Within the capsule is the cortex, which is divided into compartments called lymph nodules or lymph follicles. The lymph nodules are dense masses of lymphocytes and macrophages and are separated by spaces called lymph sinuses. In the center are the irregular masses of the medulla.

Several afferent lymphatic vessels, which carry lymph into the node, enter the node on the convex side. The lymph moves through the lymph sinuses and enters an efferent lymphatic vessel, which carries the lymph away from the node. Because there are more afferent vessels than efferent vessels, the passage of lymph through the sinuses is slowed down, which allow time for the cleansing process. The efferent vessel leaves the node at an indented region called the hilum. Groups of nodes are found in many parts of the body; for example, in the groin and armpit and behind the ear. They are composed of lymphoid tissue and act as filters for the lymph, preventing foreign particles from entering the bloodstream; they also produce lymphocytes.


Disorders of the lymph nodes