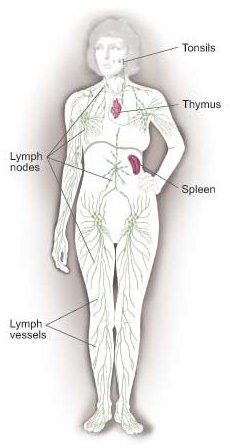 Fig 3. Diagram of the lymphatic system. 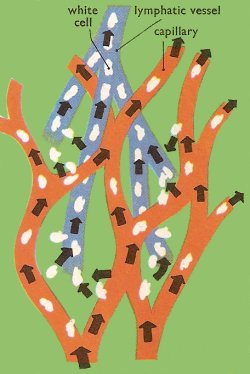 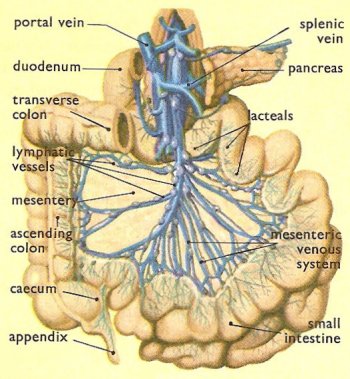 Fig 5. The lymphatic vessels of the mesentery carry the chyle from the lacteals to the cisterna chyli. 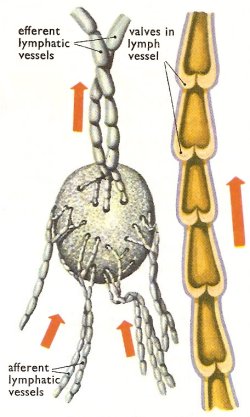 Fig 7. A lymph node and section of a lymph vessel.

The lymphatic system consists of the tissues and organs that produce, store, and carry lymphocytes (a type of white blood cell), which fight infections and other diseases.

The lymphatic system includes the bone marrow, spleen, thymus, lymph nodes, and lymphatic vessels (a network of thin tubes that carry lymph and white blood cells, or leukocytes). Lymphatic vessels branch, like blood vessels, into all the tissues of the body.


Functions of the lymphatic system

The second function of the lymphatic system is the absorption of fats and fat-soluble vitamins from the digestive system and the subsequent transport of these substances to the venous circulation. The mucosa that lines the small intestine is covered with fingerlike projections called villi. There are blood capillaries and special lymph capillaries, called lacteals (see below), in the center of each villi. The blood capillaries absorb most nutrients, but the fats and fat-soluble vitamins are absorbed by the lacteals. The lymph in the lacteals has a milky appearance due to its high fat content and is called chyle.

The usual function of the lymphatics is to carry lymph from the tissue back to the bloodstream, but the great network of lymphatic vessels which serves the intestines also transports nutrient substances from the food.

During digestion the small molecules into which food is broken down find their way into the millions of tiny villi which line the interior of the intestinal wall. Some of these food molecules are carried away in the bloodstream, but others, particularly fats, enter the tiny lymphatic vessels, called lacteals, one of which lies in the center of each villus.

The mixture of lymph and nutrients, known as chyle, is carried by the lacteals to lymph vessels in the intestinal wall. It is then collected into the larger vessels which course through the mesentery and is carried to the cisterna chyli.

The cisterna chyli is an irregularly shaped chamber about 6 cm (2½ in) long and about 2.5 cm (1 in) wide which lies on the rear wall of the abdominal cavity. The intestinal lymph trunk, which carries the lymph from the intestines, and the left and right lumbar trunks, which carry lymph from the lower limbs and the pelvis, lead into it. At its upper end it narrows to form the lower end of the thoracic duct.

The thoracic duct carries the mixture of lymph and chyle from the cisterna chyli upwards through the thorax to the left subclavian vein in the root of the neck. It is the largest lymph vessel in the body, being about 41 cm (16 in) long and 0.6 (0.25 in) wide.

Changes in pressure in the body, associated with breathing, cause the lymph to move up through the thoracic duct, which is provided with several valves to prevent the fluid from flowing downwards. Just before the thoracic duct enters the subclavian vein it is joined by the left jugular and subclavian trunks carrying lymph from the left side of the head and neck and the left arm.

The lymph vessels which drain the lymph from the tissues do not run directly to the large lymph vessels, but are interrupted in their courses by small organs known as lymph nodes. These lymph nodes are the "glands" which can often be felt under the skin. Their function is to filter the lymph, removing from it any dangerous microbes which may have found their way through the skin or the intestinal wall and into the interstitial spaces.

In most cases several afferent lymph vessels carry lymph into the outer part of each lymph node. The lymph passes through the mode and is carried away from it in one or more efferent lymph vessels, and so on to the next node. And so the lymph makes its way by steps to the thoracic duct or the right lymphatic duct. The lymph vessels which carry the lymph from node to node are extremely thin-walled and delicate. Externally they have a beaded appearance. This caused by the presence within of minute one-way valves.


Disorders of the lymphatic system

In some conditions, such as after radical mastectomy, the lymphatic vessels to a limb become obstructed, causing lymph to accumulate and the limb to become hard and swollen, a condition known as lymphoedema.

Cancer commonly spreads via the lymphatic system. A primary tumor invades the lymphatics and fragments of tumor (metastases) break off and travel to the local group of lymph nodes, where the metastases continue to grow and produce a secondary tumor.