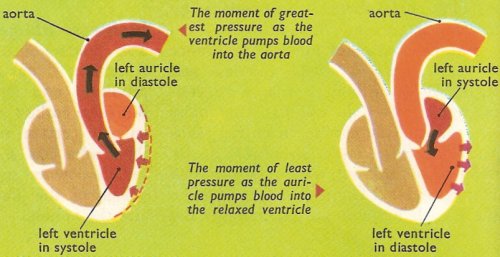 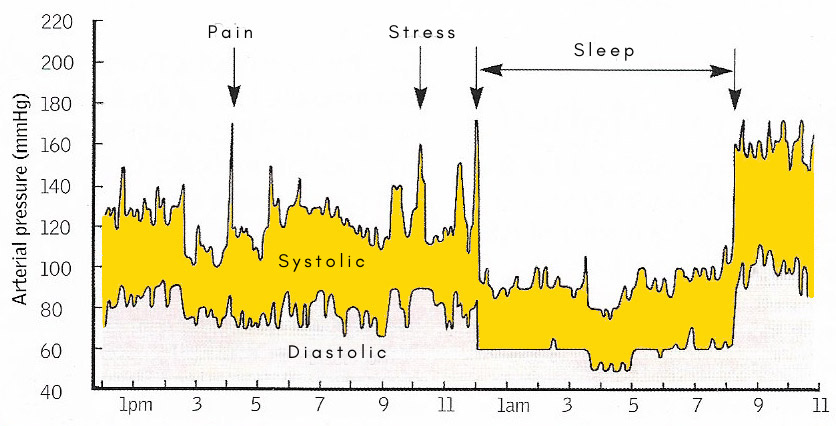 The graph shows how blood pressure varies greatly over a 24-hour period, rising in response to various stimuli such as pain or stress. Blood pressure also rises naturally during exercise. Such fluctuations are normal and depend to a certain extent on the individual.

Blood pressure is the pressure exerted by circulating blood on the walls of blood vessels due to the pumping action of the heart. The pressure of the blood within the circulatory system serves two purposes. First, it impels some of the circulating blood upwards against gravity into the carotid arteries, and so ensures a supply of blood to the brain. Secondly, it forces blood through the tiny capillaries in the tissues. These vessels are so narrow that without considerable arterial pressure the blood flow through them would be negligible.

Blood pressure is measured, using an instrument called a sphygmomanometer, in millimeters of mercury. It is greatest when the heart contracts and lowest when it relaxes. High blood pressure, or hypertension, is associated with an increased risk of heart attacks and strokes. Abnormally low blood pressure, or hypotension, is mostly seen in people in shock or following excessive loss of fluid or blood.


The parson and the mare

The first person to measure the pressure of blood was an English scientifically-minded parson, the Reverend Stephen Hales of Teddington, near London. He performed his experiment in 1679, 51 years after William Harvey had described the principles of the circulation. In his experiment Hales used a small metal pipe to which was attached, by means of a goose's windpipe, a 9-foot length of glass tubing. With the glass tubing held vertically, the free end of the metal pipe was inserted into femoral artery of a female horse. Blood immediately flowed into the glass tube and, after a few moments, reached a height of 8 ft 3 in. This demonstrated that the pressure of blood in the mare's femoral artery was sufficient to support a column of blood 8 ft 3 in long. Moreover, the level rose and fell a little with each beat of the mare's heart. The contraction of blood (systole) pumped out blood and the pressure rose; and as the heart relaxed (diastole) the pressure fell back a few inches.

If the same experiment were to be performed on a healthy adult human the column of blood would be much shorter – only about 4 feet 6 inches. In practice it is the custom to measure blood pressure against a column of mercury rather than blood, and to express the result as the number of millimeters of mercury supported.


How blood pressure is measured

The sphygmomanometer, although less direct than the approach Hale used, provides a practical and painless method of taking a person's blood pressure. Around the upper arm is wrapped an inflatable cuff to which is attached some form of pressure-measuring device. When all is ready the pulse is felt at the wrist and air is gently pumped into the cuff. As the pressure rises the pulse quite suddenly disappears. It does so when the pressure in the cuff is sufficient to compress the brachial artery quite flat, so that the blood can no longer reach the wrist. At this point the gauge reads the systolic pressure.

A little more skill is needed to determine the diastolic pressure. The usual method is to blow up the cuff until the pulse at the wrist is obliterated. The valve on the cuff is then loosened a little so that the air escapes very slowly. While this is happening a stethoscope is applied to the front of the elbow. As the pressure in the cuff falls a characteristic series of sounds is heard, and then silence. At this point the gauge registers the diastolic pressure.


How blood pressure is maintained

The maintenance of blood pressure within the arteries is a complex physiological process that basically depends on three factors which, under nervous control, keep the pressure relatively constant.

First, the beating of the heart is continually pumping blood into the aorta. The blood flows along the large arteries and into the smaller vessels, where it replaces the blood escaping through the capillaries into the veins. In this way the volume of blood in the arterial system is maintained.

Secondly, the walls of the arteries contain muscle and elastic fibers. Each time that the heart beats and discharges blood into the arterial system, these fibers stretch to accommodate the influx of blood. When the heart relaxes, on the other hand, the fibers in the walls of the vessels contract, and by so doing they not only reduce the capacity of the circulatory system but also maintain the pressure.


How blood pressure is controlled

In the arch of the aorta, and in that part of the carotid artery just below the bifurcation known as the carotid sinus, there are a number of small sense organs called baroreceptors. These organs are sensitive to the pressure of the blood in the two large vessels, and their function is to discharge nerve impulses, which, passing along the aortic and glossopharyngeal nerves, report this pressure to the vasomotor center in the medulla oblongata.

In response to the sensory messages the vasomotor center discharges impulses along the nerves of the autonomic nervous system to correct any deviations from the normal pressure. Thus, should the pressure fall, the force and rate of the heart-beat are increased so that more blood is pumped into the arteries. At the same time the arterioles contract to reduce the rate at which the blood escapes into the veins. An increase in pressure has the opposite effect.

Besides the baroreceptors there are chemoreceptors. There are two types of these organs: the aortic body in the arch of the aorta and the carotid body near the bifurcation of the carotid artery. They have a rich supply of blood and their function is to sense the amount of carbon dioxide that it contains. When the carbon dioxide content rises the respiration rate increases to wash out the unwanted gas, and at the same time the rate and force of the heart-beat is increased.

In a serious accident it is not unusual for one or more large blood vessels to be damaged, and for a hemorrhage (severe bleeding) to take place. The amount of blood circulating in the body is greatly reduced. In these circumstances the blood pressure tends to fall, and as it does so compensatory mechanism come into play to keep it as near normal as possible, and thus to maintain the supply of blood to the most important parts of the body.

Impulses from the baroreceptors of the aortic arch and the carotid sinus signal the fall in pressure to the vasomotor center. In response the center sends messages along the vagus nerve to increase the rate and the force of the heart-beat. At the same time other messages passing out along the sympathetic nerves bring about contractions of the arterioles in the skin, which impedes the flow of blood through the peripheral vessels, and in consequence the skin turns pale. Furthermore, the spleen contracts, and in doing so forces its store of blood into the circulation.

In this way the body attempts to maintain life by keeping up the pressure of the blood that remains within the circulatory system. It cannot, of course, compensate for a really vast hemorrhage – for example, from a bullet wound of the aorta – but it is sufficient to sustain life after loss of even as much as half of the blood volume.