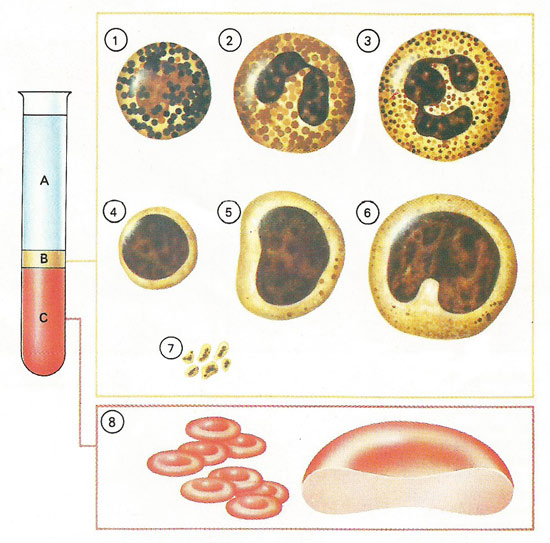 Spun in a high-speed centrifuge, blood separates out into plasma (A), layers of white cells and platelets (B), and red cells (C). Fluid plasma, almost 90% water, contains salts and proteins. Three main types of white cells, shown in magnification, are granulocytes (1-3), small and large lymphocytes (4,5), which are involved in the body's defences, and monocytes (6). Platelets (7) are vital clotting agents. Red cells (8) are the most numerous. 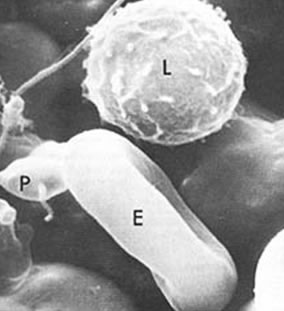 Constituents of blood. L is a lymphocyte or white blood cell. E is an erythrocyte or red blood cell. P is a blood platelet. Credit: NASA.

Blood is a fluid that circulates through the tissues of an animal's body, bringing oxygen, nutrients, and hormones to the cells, and carrying away waste products to be excreted. In warm-blooded organisms, it also plays an important role in maintaining a uniform body temperature. Blood travels through various types of blood vessels.

Suspended in the watery plasma of blood are seven types of cells and cell fragments: red blood cells (erythrocytes), white blood cells (leukocytes), and platelets. White blood cells come in five varieties. Three of these – neutrophils, eosinophils, and basophils – have granules in their cytoplasm and so are known as granulocytes; the other two varieties – lymphocytes and monocytes – lack granules. All the various types of blood cells are produced in the bone marrow (some 1011 of them each day in an adult human) and arise from a single type of cell called a hematopoietic stem cell – an "adult" multipotent stem cell.

Blood has an exceptionally high oxygen-carrying capacity. For example, a liter of mammalian blood can carry about 250 cm3 of oxygen, compared to a mere 5 cm3 of oxygen that can be dissolved in a liter of ordinary seawater at the same temperature. This high oxygen-carrying capacity is made possible by the presence of a metal-containing pigment, which is attached as a prosthetic group to the blood's protein. The pigment combines reversibly with oxygen (to form oxyhemoglobin), picking it up in a lung or a gill and ferrying it to the cells before letting it go. This process works because the pigment combines with oxygen at high partial pressures, found within the organism's respiratory organ, then releases it at the comparatively low pressure within cells. The most widely-distributed blood pigment on Earth is hemoglobin (Hb). Several other pigments have been discovered in nature, which, while not as efficient as hemoglobin, are able to serve as adequate oxygen-transporters in certain environments.