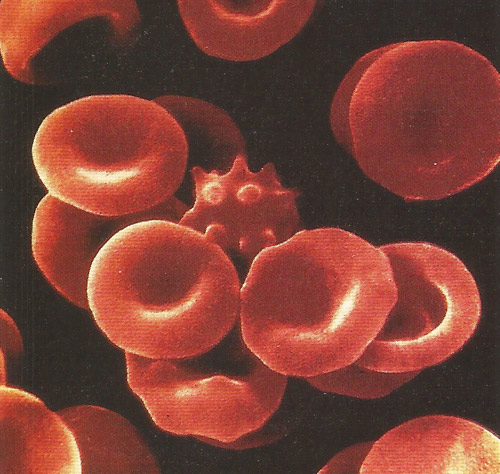 An erythrocyte, commonly known as a red blood cell, is the most numerous type of blood cell. Erythrocytes taken the form of biconcave disks, narrow-waisted in profile. They contain the red respiratory pigment hemoglobin and are responsible for oxygen transport. The splitting of hemoglobin into a huge number of such little packets, each with a large surface area in comparison to its volume, vastly increases the surface area for oxygen exchange; the total area of the red cells is 1,000–2,000 times that of the body. In health a red cell of normal shape and size is said to be normocytic, and, if it has a normal complement of hemoglobin, normochromic.

Erythrocytes are sensitive to the osmotic pressure of the blood plasma. An increase in osmotic pressure shrivels them by withdrawing water, while they swell up and burst in a weaker solution, their pigment is released, and the blood is said to be hemolyzed.

Before birth, red blood cells are formed in the bone marrow, liver, spleen, and lymph glands. After birth, the marrow is their only source; in early life the bones are full of red marrow, but later this retreats to the bone ends, leaving the shaft occupied by yellow fatty marrow. In humans, the number of erythrocytes in the blood varies between 4.5 and 5.5 million per cubic millimeter. They survive for about 120 days and are then destroyed in the spleen and liver.