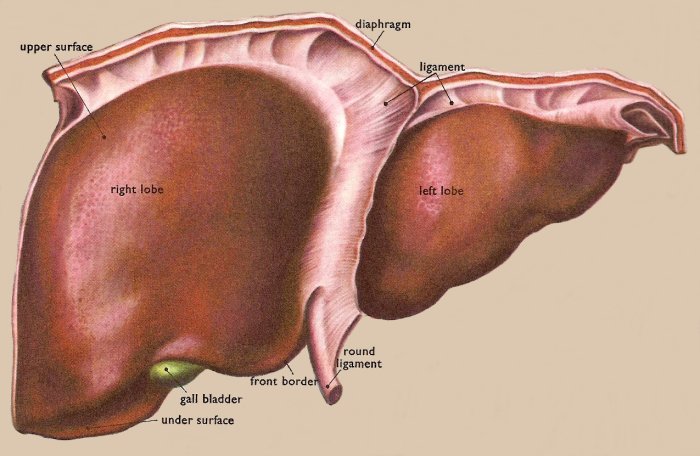 Fig 1. The liver as seen from the front. 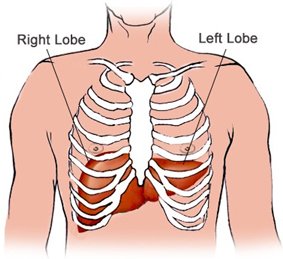 Fig 2. The liver is situated mostly in the top right portion of the abdominal cavity just under the diaphragm. It can be felt as a hardish mass just below the bottom right rib.

Fig 3. The liver and neighboring organs. 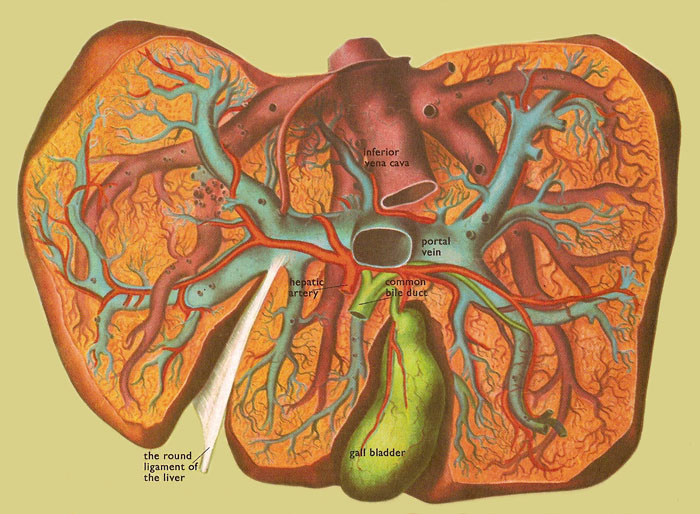 Fig 4. This dissection of the liver seen from below illustrates the branches of the portal vein, the hepatic artery, the hepatic vein, and the bile duct. 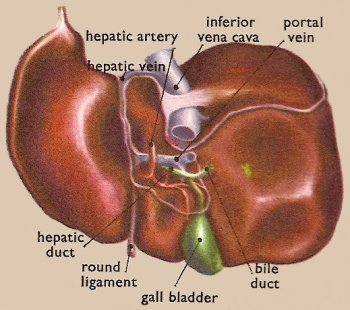 Fig 5. The liver as seen from below and behind. 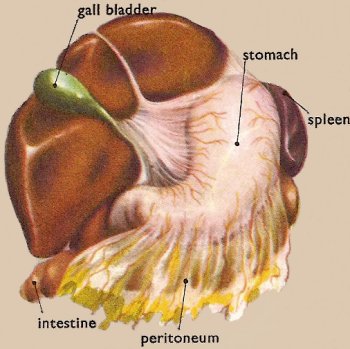 Fig 6. The liver pulled upwards to show the position of the stomach underneath. 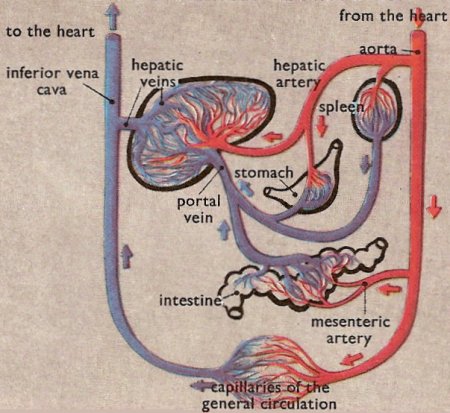 Fig 7. The liver's place in the circulation.

Fig 8. Structure of a lobule.

The liver is the largest solid organ (the largest of all is the skin) and the largest gland in the human body. In an adult it weighs typically about 1.6 kilograms (3½ pounds), and is about 18 cm (7 in) across and 15 cm (6 in) deep at its deepest part. Medical terms to do with the liver often start in hepato- or hepatic from the Greek hepar for liver.

The liver is a complex, indispensable, multipurpose organ. You would die within 24 hours if it stopped working. The liver has a major role in dealing with the nutrient products of food digestion. It detoxifies harmful substances absorbed via the intestines. It is involved in recycling red blood cells by breaking these down and one of the by-products of this process is bile which is important in the breakdown of fats. The liver also produces essential proteins and clotting factors for the blood, and regulates the metabolism of cholesterol. Roughly one quarter of the blood in the the body flows through the liver every minute. Like all other major organs in the body the liver receives a direct arterial blood supply (via the hepatic artery). However it also has a second (dual) venous blood supply in that the blood that leaves the intestines also flows through the portal vein and into the liver. All the blood entering the liver is collected up and eventually leaves the substance of the liver through three great veins. Although life without a functioning liver is impossible, the liver is remarkably resilient and the human body can withstand the loss of up to two thirds of the normal liver without any significant effects. Following the loss of substantial liver volume the residual liver remnant will enlarge – a discovery that has made modern day liver surgery and transplantation a reality.


Structure of the liver

At the gross (macroscopic) level, the liver is divided by fissures (fossae) on its surface into two major lobes (right and left) and two smaller lobes (quadrate and caudate).

It is connected to the diaphragm and abdominal walls by five ligaments: the membranous falciform (which also separates the right and left lobes), coronary, right and left triangular ligaments, and the fibrous round ligament (which is derived from the embryonic umbilical vein).

The liver receives blood from two sources. Oxygenated blood is supplied in the hepatic artery, a branch of the celiac trunk from the abdominal aorta.

Venous blood from the entire gastrointestinal tract (containing nutrients from the intestines) is brought to the liver by the hepatic portal vein. On reaching the liver the portal vein divides into thousands of which pass in between the lobules and terminate in the sinusoids. The blood leaves the liver via a central vein in each lobule, which drains in the hepatic vein.

At the microscopic level, the liver consists of hexagonal shaped functional units called hepatic lobules. These, in turn, are made up mostly of hepatocytes (the commonest type of liver cell) arranged in thin layers that radiate from the central canal (central vein) to the periphery of the lobule. Between the radiating rows of hepatocytes are small blood vessels called sinusoids. These receive oxygen-rich blood from the hepatic artery and nutrients from the intestines via the portal vein. The oxygen and nutrients diffuse through the capillary walls into the liver cells.

Within the sinusoids are specialized macrophages called Kupffer cells that figure prominently in the recycling of old red blood cells. At the corners of each lobule is a complex, called the portal area, composed of branches of the hepatic portal vein, hepatic artery, bile duct, and nerve. Bile drains from the hepatocytes by the many small bile ducts that unite to form the main bile duct of the liver, the hepatic duct. This joins the cystic duct, which leads from the gallbladder, to form the common bile duct, which drains into the duodenum. The central canal is a blood vessel in the middle of each lobule which receives blood from the hepatic portal vein and hepatic artery via the sinusoids and drains the blood into the hepatic vein.

The circulation of blood in the liver is so arranged that very large volumes of blood come into close contact with the cells of the lobules. The cells are thus in a favorable position both to absorb materials from the blood and also secret materials into it. This they do all the time, for the real task of the liver is to maintain in the blood the correct concentrations of many of its constituents. Hepatocytes carry out most of the tasks attributed to the liver, but the phagocytic Kupffer cells that line the sinusoids are responsible for cleansing the blood.

When digestion is going on after a meal the portal vein brings to the liver large amounts of the simple sugar, glucose. The liver cells extract the glucose molecules from the blood and by joining them together make the substance glycogen, which the liver can store. When, as between meals, the amount of glucose in the blood falls, the glycogen is converted back into glucose which escapes from the blood.

When the red cells of the blood become worn out they are destroyed by the cells of the reticuloendothelial system. In this process bilirubin is formed, and this is carried by the blood to the liver. Together with several other substances it is secreted by the liver as bile.

Proteins are made of long chains of amino acids. When these amino acids are metabolized ammonia is released, and were this poisonous substance not rapidly converted into something less harmful, it would soon prove lethal. In the body the ammonia is converted in urea. This process goes on almost entirely in the liver, and it is only after the urea has been synthesized that it is carried in the blood to the kidneys, where it is excreted in the urine.

In the blood plasma there are three soluble proteins which are essential for our well-being. These proteins are albumin, globulin, and fibrinogen, and all of them are largely formed in the liver. Albumin and globulin are important, for they control the amount of water that the blood draws out of the tissues as it flows through the capillaries. Fibrinogen is the precursor of the substance fibrin which is responsible for the formation of the blood clots which form on the top of wounds.

Gluconeogenesis (the synthesis of glucose from certain amino acids, lactate or glycerol)
Glycogenolysis (the breakdown of glycogen into glucose) (muscle tissues can also do this)
Glycogenesis (the formation of glycogen from glucose)
Cholesterol synthesis
The production of triglycerides (fats)

A common sign of a damaged liver is jaundice, a yellowness of the eyes and skin. This happens when bilirubin, a yellow breakdown product of red blood cells, builds up in the blood. Among the many diseases of the liver are: