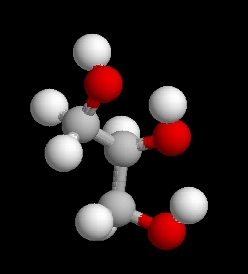 Glycerol is a principal component of all fats and oils, in the form of its esters called glycerides. The triglyceride molecule consists of one molecule of glycerol combined with three molecules of fatty acids. Glycerol was found to possess a wide variety of uses in the manufacture of numerous domestic, industrial, and pharmaceutical products. Today, the name glycerol refers to the pure chemical substance and is commercially known as glycerin or glycerine.

Glycerol (CH2OH.CHOH.CH2OH or propane-1, 2, 3-triol), in its pure form, is a sweet-tasting, clear, colorless, odorless, viscous liquid. It is completely soluble in water and alcohols, slightly soluble in many common solvents such as ether and dioxane, and is insoluble in hydrocarbons. At low temperatures, glycerol sometimes forms crystals which tend to melt at 17.9°C. Liquid glycerol boils at 290°C under normal atmospheric pressure. Its specific gravity is 1.26 and its molecular weight is 92.09.

Glycerol is widely distributed in all living organisms as a constituent of glycerides. It is used as an antifreeze molecule by certain organisms.

During digestion, glycerol is split from fatty acids and may recombine with them to form stored fat in the body or be used as a body fuel to provide energy.

In the form of rectal suppositories, glycerol relieves constipation by softening hard feces. Glycerol is used in moisturizing creams to help prevent dryness and cracking of the skin (for example, it is used to protect the nipples during breast-feeding). Glycerol is also used in ear-drops to help soften earwax prior to syringing of the ears, and in cough remedies to help soothe a dry, irritating cough.