cirrhosis of the liver 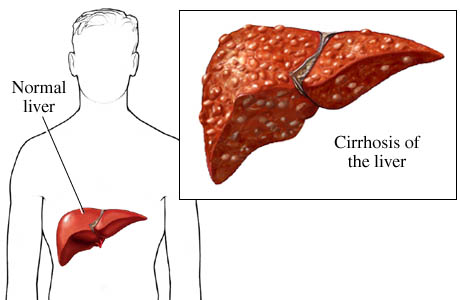 Cirrhosis of the liver is a disease in which scar tissue replaces normal, healthy tissue in the liver, blocking the flow of blood through the organ and preventing it from working as it should. The liver is the largest organ in the body and is essential in keeping the body functioning properly. It removes or neutralizes poisons from the blood, produces immune agents to control infection, and removes germs and bacteria from the blood. It makes proteins that regulate blood clotting and produces bile to help absorb fats and fat-soluble vitamins. Life is impossible without a functioning liver.

Cirrhosis has many causes. Chronic alcoholism and hepatitis C are the most common ones.

Alcoholic liver disease. To many people, cirrhosis of the liver is synonymous with chronic alcoholism, but in fact, alcoholism is only one of the causes. Alcoholic cirrhosis usually develops after more than a decade of heavy drinking. The amount of alcohol that can injure the liver varies greatly from person to person. In women, as few as two to three drinks per day have been linked with cirrhosis and in men, as few as three to four drinks per day. Alcohol seems to injure the liver by blocking the normal metabolism of protein, fats, and carbohydrates.

Chronic hepatitis C. The hepatitis C virus ranks with alcohol as a major cause of chronic liver disease and cirrhosis in the United States. Infection with this virus causes inflammation of and low grade damage to the liver that over several decades can lead to cirrhosis.

Chronic hepatitis B and D. The hepatitis B virus is probably the most common cause of cirrhosis worldwide, but it is less common in the United States and the Western world. Hepatitis B, like hepatitis C, causes liver inflammation and injury that over several decades can lead to cirrhosis. Hepatitis D is another virus that infects the liver, but only in people who already have hepatitis B.

Autoimmune hepatitis. This disease appears to be caused by the immune system attacking the liver and causing inflammation, damage, and eventually scarring and cirrhosis.

Inherited diseases. Alpha-1 antitrypsin deficiency, hemochromatosis, Wilson disease, galactosemia, and glycogen storage diseases are among the inherited diseases that interfere with the way the liver produces, processes, and stores enzymes, proteins, metals, and other substances the body needs to function properly.

Nonalcoholic steatohepatitis (NASH). In NASH, fat builds up in the liver and eventually causes scar tissue. This type of hepatitis appears to be associated with diabetes, protein malnutrition, obesity, coronary artery disease, and treatment with corticosteroid medications.

Blocked bile ducts. When the ducts that carry bile out of the liver are blocked, bile backs up and damages liver tissue. In babies, blocked bile ducts are most commonly caused by biliary atresia, a disease in which the bile ducts are absent or injured. In adults, the most common cause is primary biliary cirrhosis, a disease in which the ducts become inflamed, blocked, and scarred. Secondary biliary cirrhosis can happen after gallbladder surgery if the ducts are inadvertently tied off or injured.

Drugs, toxins, and infections. Severe reactions to prescription drugs, prolonged exposure to environmental toxins, the parasitic infection schistosomiasis, and repeated bouts of heart failure with liver congestion can all lead to cirrhosis.

Many people with cirrhosis have no symptoms in the early stages of the disease. However, as scar tissue replaces healthy cells, liver function starts to fail and a person may experience the following symptoms:

Loss of liver function affects the body in many ways. Following are the common problems, or complications, caused by cirrhosis.

Edema and ascites. When the liver loses its ability to make the protein albumin, water accumulates in the legs (edema) and abdomen (ascites).

Bruising and bleeding. When the liver slows or stops production of the proteins needed for blood clotting, a person will bruise or bleed easily. The palms of the hands may be reddish and blotchy with palmar erythema.

Jaundice. Jaundice is a yellowing of the skin and eyes that occurs when the diseased liver does not absorb enough bilirubin.

Itching. Bile products deposited in the skin may cause intense itching.

Gallstones. If cirrhosis prevents bile from reaching the gallbladder, gallstones may develop.

Toxins in the blood or brain. A damaged liver cannot remove toxins from the blood, causing them to accumulate in the blood and eventually the brain. There, toxins can dull mental functioning and cause personality changes, coma, and even death. Signs of the buildup of toxins in the brain include neglect of personal appearance, unresponsiveness, forgetfulness, trouble concentrating, or changes in sleep habits.

Varices. When blood flow through the portal vein slows, blood from the intestines and spleen backs up into blood vessels in the stomach and esophagus. These blood vessels may become enlarged because they are not meant to carry this much blood. The enlarged blood vessels, called varices, have thin walls and carry high pressure, and thus are more likely to burst. If they do burst, the result is a serious bleeding problem in the upper stomach or esophagus that requires immediate medical attention.

Insulin resistance and type 2 diabetes. Cirrhosis causes resistance to insulin. This hormone, produced by the pancreas, enables blood glucose to be used as energy by the cells of the body. If you have insulin resistance, your muscle, fat, and liver cells do not use insulin properly. The pancreas tries to keep up with the demand for insulin by producing more. Eventually, the pancreas cannot keep up with the body's need for insulin, and type 2 diabetes develops as excess glucose builds up in the bloodstream.

Liver cancer. Hepatocellular carcinoma, a type of liver cancer commonly caused by cirrhosis, starts in the liver tissue itself. It has a high mortality rate.

Problems in other organs. Cirrhosis can cause immune system dysfunction, leading to infection. Fluid in the abdomen (ascites) may become infected with bacteria normally present in the intestines. Cirrhosis can also lead to impotence, kidney dysfunction and failure, and osteoporosis.

If looking at the liver is necessary to check for signs of disease, the doctor might order a computerized axial tomography (CAT) scan, ultrasound, magnetic resonance imaging (MRI), or a scan of the liver using a radioisotope (a harmless radioactive substance that highlights the liver). Or the doctor might look at the liver using a laparoscope, an instrument that is inserted through the abdomen and relays pictures back to a computer screen.

A liver biopsy will confirm the diagnosis. For a biopsy, the doctor uses a needle to take a tiny sample of liver tissue, then examines it under the microscope for scarring or other signs of disease.

Liver damage from cirrhosis cannot be reversed, but treatment can stop or delay further progression and reduce complications. Treatment depends on the cause of cirrhosis and any complications a person is experiencing. For example, cirrhosis caused by alcohol abuse is treated by abstaining from alcohol. Treatment for hepatitis-related cirrhosis involves medications used to treat the different types of hepatitis, such as interferon for viral hepatitis and corticosteroids for autoimmune hepatitis. Cirrhosis caused by Wilson disease, in which copper builds up in organs, is treated with medications to remove the copper. These are just a few examples – treatment for cirrhosis resulting from other diseases depends on the underlying cause. In all cases, regardless of the cause, following a healthy diet and avoiding alcohol are essential because the body needs all the nutrients it can get, and alcohol will only lead to more liver damage. Light physical activity can help stop or delay cirrhosis as well.

Treatment will also include remedies for complications. For example, for ascites and edema, the doctor may recommend a low-sodium diet or the use of diuretics, which are drugs that remove fluid from the body. Antibiotics will be prescribed for infections, and various medications can help with itching. Protein causes toxins to form in the digestive tract, so eating less protein will help decrease the buildup of toxins in the blood and brain. The doctor may also prescribe laxatives to help absorb the toxins and remove them from the intestines.

For portal hypertension, the doctor may prescribe a blood pressure medication such as a beta blocker. If varices bleed, the doctor may either inject them with a clotting agent or perform a so-called rubber-band ligation, which uses a special device to compress the varices and stop the bleeding.

When complications cannot be controlled or when the liver becomes so damaged from scarring that it completely stops functioning, a liver transplant is necessary. In liver transplantation surgery, a diseased liver is removed and replaced with a healthy one from an organ donor. About 80 to 90 percent of patients survive liver transplantation. Survival rates have improved over the past several years because of drugs such as cyclosporine and tacrolimus, which suppress the immune system and keep it from attacking and damaging the new liver.