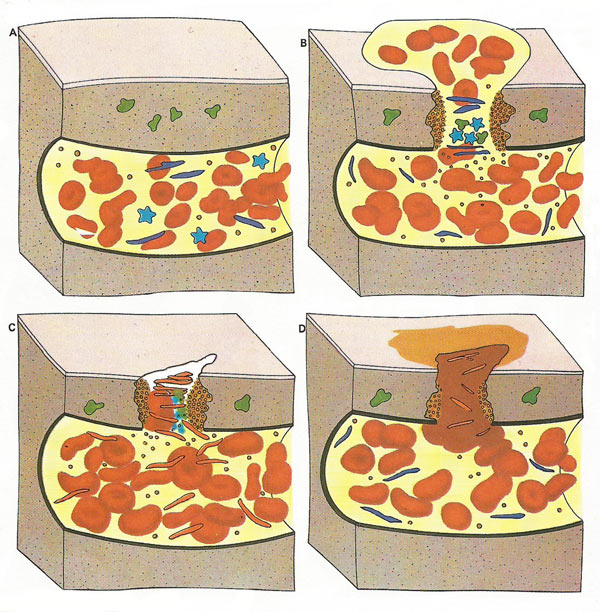 The blood-clotting mechanism is the result of a complex chain reaction involving various substances in the blood. Through the interaction of blood platelets, plasma, and tissue-clotting factors the soluble protein fibrinogen breaks up into fibrin threads and forms a mesh across the wound. Prior to injury (A) the fibrinogen circulates in the plasma. At the moment of injury (B) the platelets plug the wound while the clotting reaction takes place. Fibrin threads are laid down (C) across the site. Platelets and blood cells become trapped in the fibrin web (D). This semi-solid mass shrinks, extruding serum (a yellowish fluid) and the clot is formed. 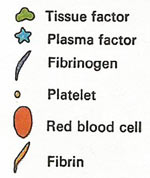 Key to diagram above.

Clotting is a protective mechanism that prevents excessive blood from being lost after an injury. The clotting process is set in motion when blood comes into contact with tissues outside its ruptured vessel. These tissues contain a factor, thromboplastin, which activates a sequence of changes in the plasma clotting factors (12 enzymes). Factor II (prothrombin, formed in the liver), with calcium ions and a platelet factor, is converted to thrombin. This converts factor I (fibrinogen) to fibrin, a tough, insoluble polymerized protein which forms a network of fibers around the platelets that have stuck to the edge of the wound and to each other. The network entangles the blood cells, and contracts, squeezing out the serum and leaving a clot, which dries to form a scab. This prevents further loss of blood, and also prevents bacteria getting into the wound. Normal clotting takes place within five minutes.

In some diseases, such as hemophilia, the clotting mechanism is impaired. See also excessive blood clotting.