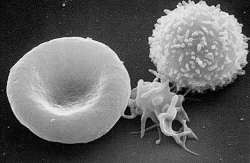 A platelet, also known as a thrombocyte, is a cell fragment, 1–2 micrometers in diameter, found in blood. Platelets are produced from megakaryocytes, which are found in red bone marrow.

Blood normally contains 150,000–350,000 platelets per microliter or cubic millimeter. This number is normally maintained by a homeostatic (negative feedback) mechanism. If the number of platelets falls much below 50,000 per cubic microliter there is a danger of uncontrolled bleeding because of the essential role that platelets play in blood clotting. Platelets release thromboxane A2, serotonin, and other chemicals in response to local tissue damage, which causes a chain of events leading to the formation of a plug at the site of the damage, thus preventing further blood loss.

With Romanowsky stains platelets appear as fragments of pale-blue cytoplasm with a few red granules.