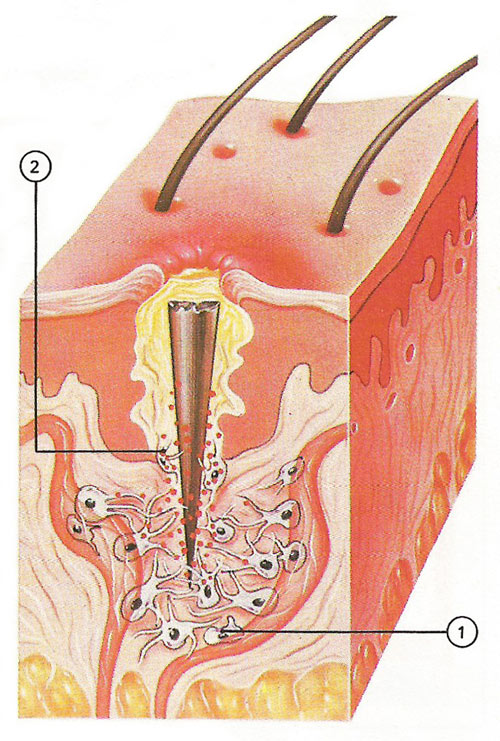 White cells are important in defense against bacterial infection such as that following entry of a splinter. The most numerous type, polymorphonuclear leukocytes (1), surround infecting microbes (2) and prevent them from spreading to adjacent tissue. Many polymorphs may be killed in the process and these form the pus. There are more to replace them and eventually the infection is eliminated.

A leukocyte is a white blood cell, specifically a colorless cell with a nucleus, found in blood and lymph. Leukocytes represent the body's primary defense against invading organisms and other foreign material. They use two main methods of defense: phagocytosis (consumption of the invader) and the immune response (see immune system.

Leukocytes are capable of amoeboid movement. They are made by the bone marrow and can produce antibodies and move through the walls of vessels to migrate to sites of injury, where they isolate and destroy dead tissue, foreign protein, and bacteria. Types of leukocytes include lymphocytes and monocytes/macrophages, which are agranular, and neutrophils, eosinophils, and basophils, which are all granulocytes. The population of white blood cells (about 6,000 per mm3) is made up roughly as follows: neutrophils (60–70%), lymphocytes (20–25%), monocytes (3–8%), eosinophils (2–4%), and basophils (0.5–1%).