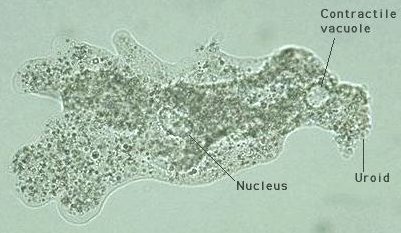 Micrograph of an amoeba.

In order to move, an amoeba pushes out projections called pseudopodia from its body. Cytoplasm flows into the pseudopod, constantly enlarging it until all the cytoplasm has entered and the amoeba as a whole has moved. Pseudopods are also used in feeding: they move out to engulf a food particle (1), which then becomes enclosed in a membrane-bound food vacuole (2). Digestible enzymes enter the vacuole, which gradually shrinks as the food is broken down (3). Undigested material is discharged by the vacuole and left behind as the amoeba moves on (4).

An amoeba (Fig 1) is any of a variety of one-celled aquatic or parasitic protozoans belonging to the order Amoebida, phylum Sarcodina of the kingdom Protista. Amoebae have no definite form and consist of a mass of cytoplasm containing one or more nuclei surrounded by a flexible outer membrane. They move by means of pseudopodia ("false feet") and possess a contractile vacuole for pumping out excess water. They can be up to 3 mm (0.1 in) long.

Amoeba live in moist surroundings – ponds, ditches, seas, and even damp soils. The type-species is Amoeba proteus, which has a single nucleus and can form only one pseudopodium at a time.

An amoeba moves by first advancing a pseudopodium from a point on its surface; the living matter then flows forward into the projection (Fig 2). The amoeba has a thin, semi-solid outer layer called the ectoplasm and an inner fluid called the endoplasm. Where a pseudopodium forms, the ectoplasm liquefies and flows forward by contraction of the sold ectoplasm elsewhere. The fluid in contact with the surface soon solidifies once more, but then the whole process is repeated.

The formation of pseudopodia also enables amoeba to feed. It engulfs microscopic organisms with cup-shaped pseudopodia. Inside the body, the food is surrounded by digestive enzymes. Undigested residues are easily lost; the amoeba simply flows away from them.

For respiration – the taking in of oxygen and removal of carbon dioxide – the gases simply diffuse through the whole of amoeba's permeable surface. Soluble nitrogen-containing wastes, produced by the amoeba's chemical activities are excreted in the same way.

Under a microscope, a bubble of liquid can be seen to form periodically inside an amoeba's body. The bubble grows and grows until finally it bursts, releasing the water to the outside. This bubble is the contractile vacuole and its function is to remove excess water passing by osmosis into the animal. Otherwise the amoeba itself would burst.

Amoeba has no special sense organs. Changes in the outside world are detected by all parts of the living material. In general, this sensitivity ensures favorable surroundings. For instance, amoeba quickly moves away from very bright light or strongly acidic or alkaline water.

The nucleus can be clearly seen with a microscope as a darkish spot inside the body. It controls the whole course of life and an amoeba deprived of its nucleus soon dies. The nucleus is especially important during reproduction. This takes place when food is plentiful and amoeba can grow to its full size. Then the nucleus divides followed by division of the rest of the cell. The two new amoeba increase in size and may themselves divide.


Reproduction and the spore state

Reproduction is almost always asexual, generally by by binary fission, though sometimes by multiple fission of the nucleus. During droughts or severe cold, amoeba withdraws all pseudopodia and secretes a tough coat or cyst. The cyst with its contents is called a spore. Each spore is very light and may be blown by the wind to new surroundings. Inside the cyst, the original animal divides to form numerous smaller individuals called amoebulae. In favorable conditions the cyst breaks down and releases them.

Intelligence is not something one would tend to associate with single-celled organisms. Nevertheless, recent research suggests that amoebae are capable of remembering past actions. In 2007, Liang Li and Edward Cox at Princeton University reported that the amoeba Dictyostelium is twice as likely to turn left if its last turn was to the right and vice versa, pointing to the existence of a rudimentary memory. The following, Toshiyuki Nakagaki at Hokkaido University in Sapporo, Japan, found further evidence of that amoeboid memory. They exposed Physarum amoeba to temperatures fluctuating regularly between cold and warm. It was already known that the cells become sluggish during cold snaps, but Nakagaki's team found that the amoeba slowed down in anticipation of cold conditions, even when the temperature changes had stopped.

Some specialized species of amoebae live as parasites inside the bodies of other animals. The disease amoebic dysentery (amoebiasis) is caused by one such type of amoeba, Entamoeba histolytica, which invades and destroys the tissues of the intestinal wall. Members of another genus, Acanthamoeba, are commonly found in soil and contaminated water and cause painful corneal ulcers, usually from improper sterilization of contact lenses in contact lens solutions.

The term "amoeboid" means having no definite shape to the cell and able to alter shape. Amoeboid movement is a type of motility of a cell in which cytoplasmic streaming (directional flow of cytoplasm) extrudes outward from the cell to form pseudopodia so that the cell can change its location. It is exhibited not only by amoebae themselves but also by some types of cells in multicellular animals including leukocytes (white blood cells).